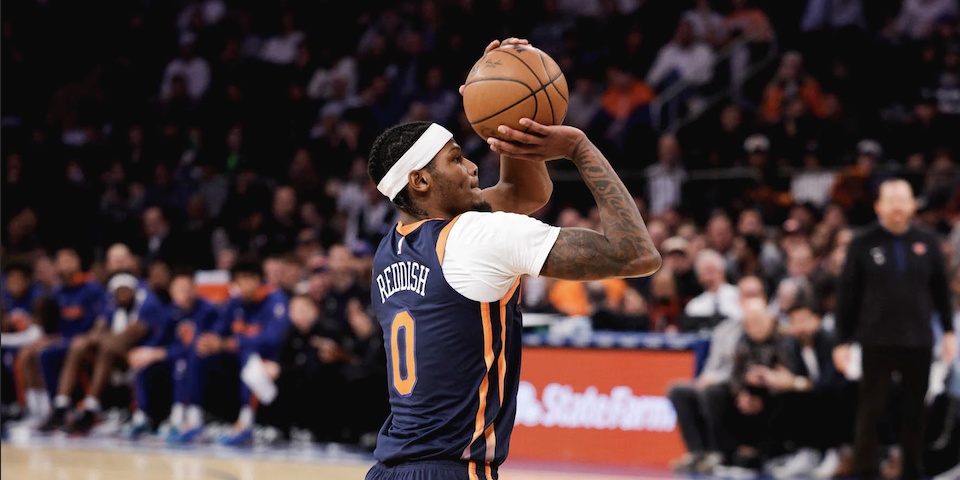 Cam Reddish has emerged as a key defender for the Knicks and has been too good to be bumped from Tom Thibodeau’s rotation.

The New York Knicks were set up for success against the Boston Celtics on Saturday night. Sure, they would have to deal with the dynamic wing duo of Jayson Tatum and Jaylen Brown, but at least they had the weapons to contain them: RJ Barrett and Cam Reddish.

With Quentin Grimes out, Evan Fournier mercifully close to exile, and Immanuel Quickley viewed as nothing more than a super reserve, Cam Reddish found himself in the Knicks’ starting lineup. All Tom Thibodeau had to do was attach Reddish to Brown or Tatum, with RJ glued to the other. Instead, Thibodeau had Julius Randle chase Brown around, as Thibodeau remains hell-bent on seeing Randle as a fringe wing instead of a fringe small-ball five.

But in the moments Reddish found himself with a top defense assignment on Saturday night, the results were encouraging.

This defensive possession from Cam Reddish was special. pic.twitter.com/4AGA8vsooY

The pesky defense on Tatum was not an aberration. This is the defender Reddish has been this season, which is why he has found his way into every game. Defense was always the way Reddish was going to find his way onto the court, and right now it is the reason he cannot be pushed off to the side once Grimes is fully healthy.

Thibodeau was not a fan of acquiring Reddish last season, playing him sparingly last season, oftentimes when the game was already decided. Before his season was cut short last year, Reddish seemed to be finding a role as a defensive menace. The ill-timed injury cut that momentum short, with Reddish on the outside looking in heading into this season.

One of the more forgettable preseasons had Reddish trending towards being traded for some 2023 second-round picks. Then opening night happened. Barrett was struggling severely, Grimes was out. The team needed someone to step up. That person ended up being Reddish.

Reddish was a pest on defense, racking up three steals along with one block.  He finally saw success on the offensive end too. Reddish poured in 12 desperately needed fourth-quarter points, including a clutch trey to send the game into overtime.

There is an unmistakable energy on the floor when Barrett and Reddish are together. Much like Quickley and Obi Toppin, Reddish and Barrett have strong ESP for one another.

Never too early for a comeback! pic.twitter.com/k9mx88wwi0

The Knicks’ defense has an extra bite to it, the chemistry in transition is strong, and the result is aesthetically pleasing basketball.

where were you for the Cam Reddish game? pic.twitter.com/ugqhAlDLch

Opening night happened to be Reddish’s best offensive performance of the season. He has only scored double-digits once since, but his value remains on the defensive end. The appeal with Grimes as a starter was his low maintenance on offense in a lineup already comprised of Barrett, Randle and Jalen Brunson.

As Grimes continues to hamper a troublesome left foot, Reddish could be that guy. He is nowhere near the sniper Grimes is from deep but he gives the Knicks a formidable defender capable of guarding four positions. On nights when the Knicks face scorers of Brown and Tatum’s ilk, having a defender of Reddish’s caliber is essential.

Thibodeau’s decision to start Reddish rather than re-inserting Evan Fournier on Saturday proved the coaching staff has taken notice of Reddish’s rise in the rotation. The big question that remains is what happens to Reddish once Grimes is fully healthy.

There are only so minutes available, and as Toppin can attest, Thibodeau rarely deviates too far from his plan when it comes to distributing those minutes. History tells us that when Grimes solidifies himself as the full-time starter — assuming he already isn’t when available — Fournier would shift to the second unit.

While it is not the malpractice that Toppin and Quickley playing limited minutes is, Reddish deserves to remain an integral part of the rotation, with Fournier finding spot minutes for all the reasons outlined: he is a deployable menace on defense, has strong chemistry with the team’s best player, and when he is right, can get you some buckets.

“I know what Cam can do,” Barrett said after a comeback win in Philly, in which once again Reddish played well in the fourth. “I ain’t worried about Cam. Cam’s that guy. Cam’s that guy.”

Barrett was always a believer, and now it appears the rest are starting to believe as well. There are certainly still facets of Reddish’s game that remain under construction. However, it is unmistakable that he is providing enough value to stay on the floor when the Knicks are at full strength.

»Read: The Knicks have a center battle brewing