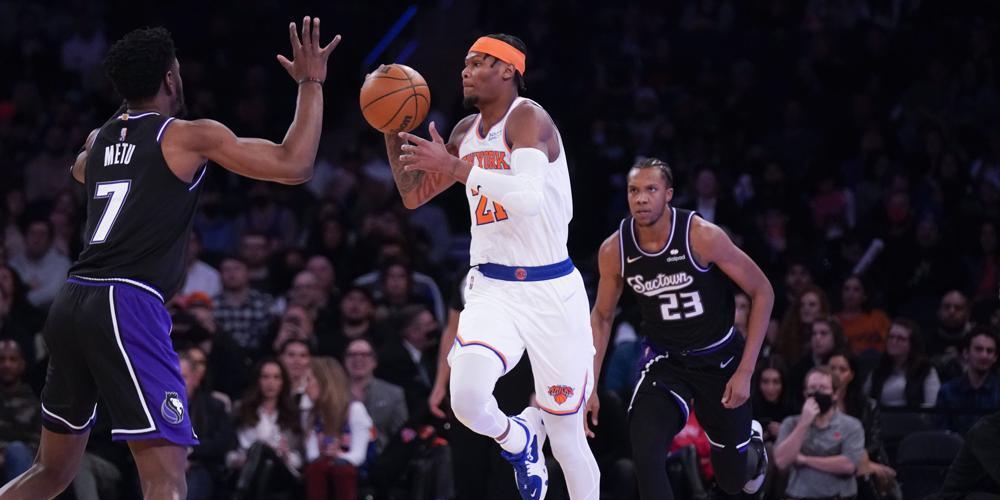 On a night with a couple of rotation players injured, Cam Reddish had his first chance at extended playtime with the Knicks.

In a long season of wondering when head coach Tom Thibodeau will shake the snowglobe and finally adjust his lineups, Monday night seemed like as good of a reason as any for it to finally happen. Kemba Walker was declared out for rest with the back-to-back games, and Quentin Grimes would be sitting out with a knee injury. The one player Knicks fans had been clamoring to see since being traded to the Knicks, Cam Reddish, may finally see enough playing time in a game to prove himself to his new head coach.

Well, the changes weren’t so drastic, as Thibodeau installed Alec Burks as the starting point guard—an out-of-position decision he’s stuck with whenever Walker is out. Reddish, however, did still get his shot. He seemed to take Grimes’ spot in the rotation for the night, entering in the first quarter in place of Evan Fournier like Grimes often does.

Reddish played seven minutes in the first half and made the most of his time on the court. He scored six points, going 1-for-3 from the field, and made all four of his free throws. Reddish had two open looks from three but saw neither fall through the net.

As impressive as Reddish’s offense was, that’s always been the focal point of his game. A point of concern, and rumor as to why Thibodeau may not be playing him, is that Reddish is not a willing defender. He got to quick work of removing that stigma last night, recording a steal and several ball deflections in his first-half minutes.

Reddish reentered the game in the third quarter at a similar mark and played an additional eight minutes, totaling 15 for the night. He was actually the last of the reserves to leave the game for the starters, along with Immanuel Quickley, with almost eight minutes to go in the close contest. He even played the second-most minutes of any bench player behind Quickley and finished with the most bench points at six on a poor night from that unit.

Reddish’s second half was less impressive, as he missed the only shot he attempted. He played significant minutes during a spiral of a fourth quarter for the Knicks, losing a lot of the luster he had worked up in the first half. The only shot Reddish took was a long, contested 20-foot jump shot that was emblematic of the main offensive concern of his: erratic, head-scratching shot selection. In a close game, it was a dismissable shot that Thibodeau will most definitely keep in mind when thinking over his rotations tonight against Denver.

Aside from Reddish, it’s worth noting that Thibodeau made no other changes to his rotation with two of his set guys out. He stuck to nine players tight, even on a night where Quickley and Nerlens Noel were noticeably struggling to find their place on the court. The bench combined to score only 11 points and most definitely could have benefitted from an infusion of Miles McBride or Jericho Sims to try something different. With Alec Burks playing out of position and Quickley unable to get anything going, McBride may have been a reprieve on a night where the Knicks couldn’t get a set going at all within the last five minutes of the game.

Similarly, on a night where Mitchell Robinson had perhaps the best game of his career (19 points, 21 rebounds, three blocks, and two steals), a center like him in Sims may have performed similarly well against a Jazz team missing their anchor in Rudy Gobert. Instead, Noel went scoreless and was unable to even find a groove on the defensive end. Having Sims play some of his minutes may have created more offense down low and helped out a fatigued Robinson who played 36 minutes on the night.

Especially when the Knicks are playing back-to-back games, minute management is crucial. The struggles of this bench unit forced all starters to play at least 30 minutes, though. So even though Reddish didn’t have the breakout performance he may have needed to make a rotational case, he just might have another opportunity tonight. If Grimes remains out, he ought to see a similar minute output with the starters fatigued from last night’s content. Regardless, if things continue as they have been for the Knicks, Thibodeau just may have to blow the rotation up and start from the bottom again. If the front office decides to trade some rotational pieces away, they would even expedite this process.

»READ: The Knicks must do something at the trade deadline