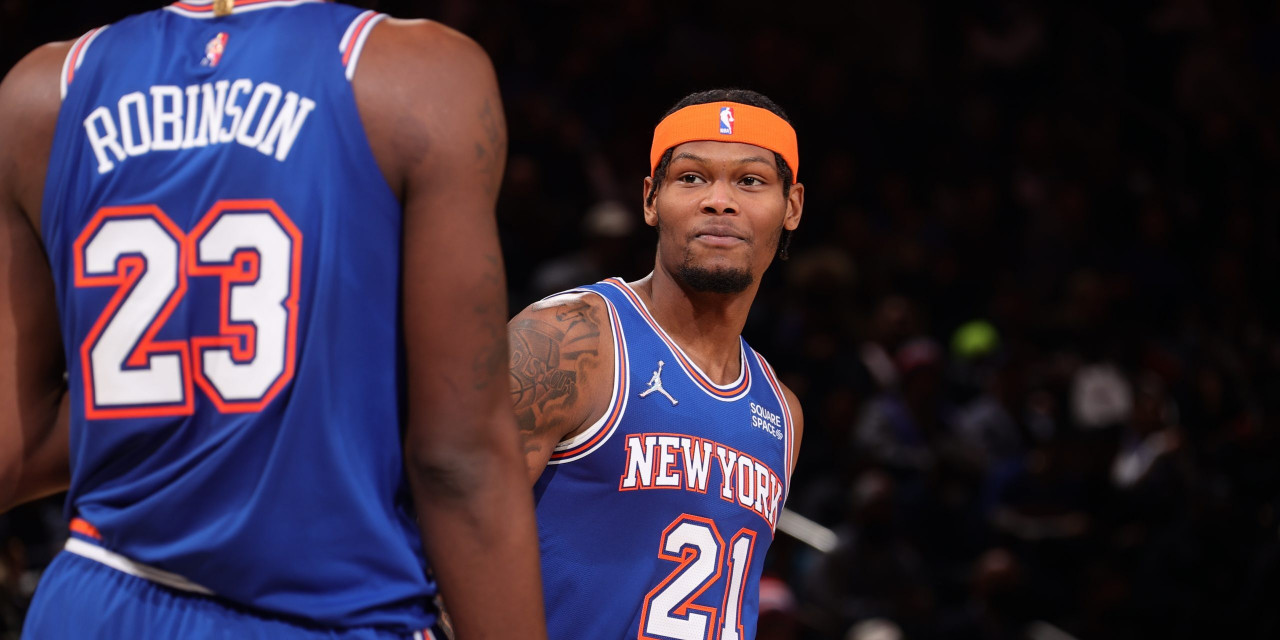 Cam Reddish played five minutes on Monday, now totaling 20 minutes in three games for the Knicks. He—along with the youth—needs to play.

It’s recently come to light that the New York Knicks are putting their veteran players up for sale ahead of the impending NBA trade deadline on February 10th. Most notably, free-agent additions Kemba Walker and Evan Fournier are available in negotiations according to ESPN’s Brian Windhorst. It’s safe to say 51 games into the season the experiment has not worked—the Knicks have not been able to build on what they did the previous season, nor have the offseason reinforcements meshed properly.

At best, the Knicks’ offseason moves have been lateral and, at worst, they’ve made the team worse. New York decided to keep most of their team together from last season and have mainly depended on their veteran play, but it seems this team has reached its ceiling. The best thing to do for the long-term success of the franchise is to start selling off the older players and focus on the youngsters. The fact is that the Knicks have played in two-thirds of their games this season and the head coach refuses to make significant changes to a rotation that is just not producing the expected results when he has other options.

The Knicks have plenty of young talent that is more than capable of the production head coach Tom Thibodeau’s more trusted veterans are currently generating. This team is not competitive enough to hinder the progress of younger players. The Knicks are three games under .500 after dropping four of their last five contests; they sit at 24-27. New York could use some of the young, vibrant energy that is brimming from their roster ready to burst. Unfortunately for those up-and-coming players and the fans clamoring to see them, the coach refuses to make the necessary adjustments amidst the team’s struggles and stubbornly continues to play guys like Alec Burks, Kemba Walker, and Nerlens Noel—especially since the latter two have proven to be unreliable due to health concerns. These players are simply not worth playing over New York’s latest batch of neophytes in Quentin Grimes, Miles McBride, and Jericho Sims, who are all 2021 draft picks and have already flashed signs of being capable NBA players like Obi Toppin and Immanuel Quickley did before earning their playing time.

The biggest disservice, however, was handed to the newest Knick, Cam Reddish, a third-year former lottery pick and 3-and-D player for whom the Knicks traded their former lottery pick, Kevin Knox, and a second-round pick to the Atlanta Hawks. Unlike Knox, who was riding the bench in New York, Reddish was playing significant time for the Hawks before his injury and being dealt—he was averaging 11.9 points per game while playing 23.4 minutes a night. In 37 games (34 for the Hawks and three for the Knicks) Reddish is shooting 37.6% from behind the three-point line. Only two players on his new team, Burks and Fournier, are shooting as well or better in as many or more games from distance.

In five games Reddish has been available to play for the Knicks, he has played in a little over twenty combined minutes in three of them, most of it in garbage time. Reddish, a potential spark, has been warming the Knicks’ bench while many of the rotation’s main stalwarts have struggled. Most notably Burks, Thibodeau’s anointed Swiss Army knife, has been brutal since before the Reddish acquisition. In January, he only averaged 9.5 points a game on 33.3% shooting from the field; Burks’ three-point shooting has also plummeted during the first month of the new year, shooting 32.8% from long range.

New York’s man main, Julius Randle, has been in a prolonged slump and could use a breather from time to time, a stark contrast to Thibodeau’s insistence on forcing Randle to play big minutes and figure it out in real-time out on the court. Randle’s been under a microscope as of late and scaling back his playing time just a bit could do him some good.

Reddish is more than capable of substituting in spot minutes for the Knicks’ struggling star with the ability to score while being able to defend multiple positions.

The Knicks didn’t trade for Reddish to have him sit on the bench when he’s proven to be a serviceable NBA player with excellent potential in the past. It’s understandable for there to be an adjustment period for a player joining a new team. Not everyone is going to play right away unless they’re a star or filling a need, especially if a guy is coming over with during the middle of the season on top of being injured. But it would behoove the coaching staff to see what they got in a two-way threat like Reddish. Thibs himself has given him plenty of praise, saying “You can’t have too many wings.” Until Reddish cracks the rotation, the Knicks coach is proving otherwise.