Can Immanuel Quickley Crack the Knicks’ Rotation as a Rookie? 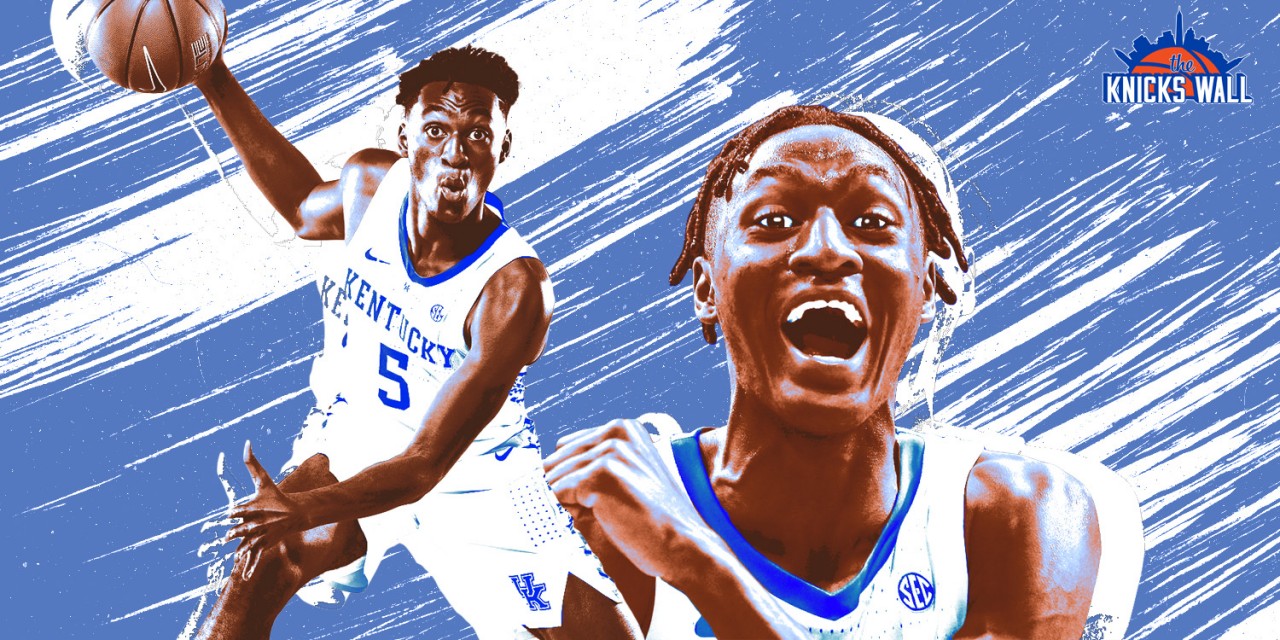 The Knicks, all things considered, traded up and reached for Kentucky guard Immanuel Quickley at no. 25. That means he’ll have a lot to prove.

After selecting Obi Toppin with the eighth overall pick, the New York Knicks used their second first-round draft pick to address the backcourt. While it wasn’t a traditional point-guard pick, New York went to address another primary need, shooting, with the selection of Kentucky guard Immanuel Quickley with the 25th overall pick.

Quickley played two seasons at Kentucky, finishing his career with averages of 10.1 points, 2.9 rebounds, and 1.5 assists. The Knicks were reportedly impressed with his work ethic and decided to make him the second pick of the Leon Rose era. Even with the additions of Austin Rivers, Alec Burks, and a returning Elfrid Payton, Quickley has a chance to impress and make a quick impression on New York fans.

It starts with Quickley’s ability to shoot the basketball. In his two seasons as a Wildcat, the former five-star recruit finished with 39.7% shooting from three on 232 total attempts. His free throw shooting was even more impressive, with 89.5% for his career and 92.3% shooting on 156 attempts as a sophomore. Impressive work and strong numbers for someone whose elite skill is spacing the floor.

For a Knicks team lacking that ideal balance on the offensive side of the ball, Quickley offers another guard who can help create and capitalize on defensive miscues by shooting the ball. Even as New York plays mostly veterans ahead of him at the start of the season, his one elite skill will allow him to see the floor in spurts and make an impact few players on the roster can make.

The second strength in Immanuel Quickley’s game is his defensive upside. At 6-foot-3 with a 6-foot-8 wingspan, Quickley is made to pester point guards and smaller wings. While not an explosive defender, in terms of blocks and steals (career 1.1 stocks per 40 minutes), he was more known for his defensive prowess of anticipation and proper rotation at Kentucky.

Even though he doesn’t pop defensively, Quickley is going to the perfect environment. Tom Thibodeau and Darren Erman, another new assistant coach, are defensive-minded coaches, who have helped several players take a step forward defensively throughout their careers.

Shooting and defense are prime skills in today’s game, especially from a perimeter player. However, Quickley is not a player without his faults. Can he corral his shot selection? After shooting 42.8% from three as a sophomore, he finished with a field goal percentage of just 41.7%. How can that happen? Quickley is good from three, great at the line, but not so great inside the arc. He’s also not great at getting to the rim. Quickley finished with just 50 shots at the rim all season, finishing 24 attempts, via Hoop-Math.com.

That small issue in his game may take a backseat to playing time being his biggest issue right away. If New York decides to keep Quickley flexible, playing him both on-ball and off-ball as a rookie, then he’s battling for minutes against Payton, Frank Ntilikina, Dennis Smith Jr., Burks, Rivers, Reggie Bullock, and R.J. Barrett. That’s an extensive list of players who offer similar skills to Quickley, making the rookie’s battle for minutes an uphill one.

The biggest question mark for Quickley is also his biggest swing skill. Can he play the point guard position in the NBA?

Two years at Kentucky and we didn’t get a clear answer. Sharing the backcourt with two five-star prospects in Ashton Hagans and Tyrese Maxey, Quickley served more of an off-ball role, often providing the spacing for Hagans and Maxey to get to the basket and break down opposing defenses. In the short time he did, Quickley didn’t impress, but also didn’t look overmanned handling the ball. With New York knowing that he can space the floor and defend, perhaps a shot at viewing him as a lead ball-handler is an option.

Can he operate pick-and-roll? Can Quickley run the offense and maintain his shooting? Can he do it in spurts? Those questions, as well as how the Knicks plan to develop him, are key to his future. If Quickley can man the point guard position, we’re talking about another element to his game. Now, we can project him as Landry Shamet type—someone who can score, defend, pass, but never lead the offense nor get to the rim. Those skills are valuable.

In the event that Quickley cannot run the offense, his profile is more of a 3-and-D guard, who probably can’t defend much larger opponents. To acquire a 3-and-D guard with the 25th pick in the draft is a steal, and if he can hit the ground running and make his value known, the Knicks could thrust him into the rotation right away and reap the rewards of a rotation player on his rookie contract. This archetype has value, even if it might be limited to one true position.

In selecting Immanuel Quickley in the first round of the 2020 NBA Draft, New York selected a player who has some clear strengths, but some question marks on just how much he’ll impact the game. The shooting and defensive upside are there, but what will make or break him is his ability to play the point guard position.

What could be best for Quickley is keeping him on the main roster for a bit, allowing him to get brief glimpses of game time, before sending him down to Westchester for the truncated G League season. There, not only can he get a large amount of game time, but New York can test the waters with him as a point guard. Those reps will allow the Knicks to see where he is when they eventually bring him up for the second half of the season.

The New York Knicks took a bit of a gamble with their second first-round pick of the 2020 draft, selecting a talented guard who was projected to go a bit lower than that. In Quickley, they have a talented shooter with the defensive tools to be a solid player in a Thibodeau defense. The Knicks can use their development team to see whether he can mature into a respectable point guard or not.

Whether he’s a point guard, shooting guard, or even a combo guard, Immanuel Quickley is a fine player who can help the Knicks, offer cheap shooting and defense, and could emerge as a favorite of Thibodeau in due time.