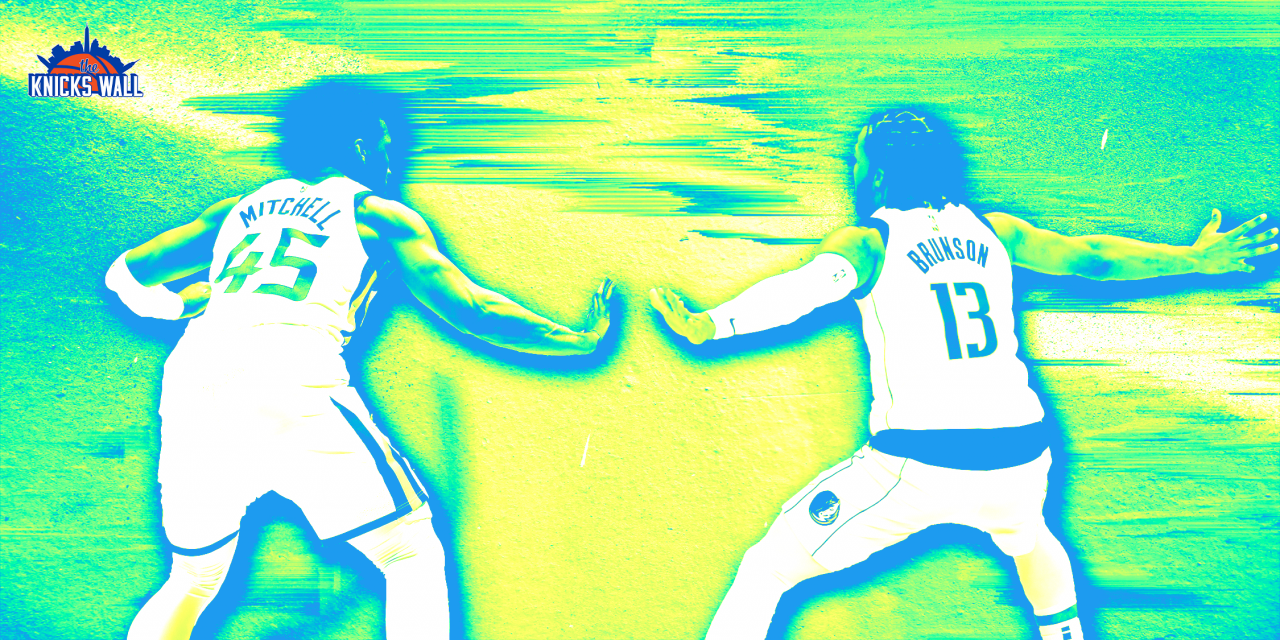 Much has been made of the defensive issues with a Jalen Brunson and Donovan Mitchell duo. How much of a problem would it be?

Height has been discussed more than ever this offseason for the New York Knicks.

The skepticism surrounding the Knicks’ ability to maintain an above-average defense in the league with the potential backcourt of Jalen Brunson and the Utah Jazz’s Donovan Mitchell has become a sticking point for some who are wary of trading a bevy of picks and young players to Salt Lake City in exchange for three-time All-Star.

By now, it feels almost inevitable (keyword: “almost” – no jinxes here) that Mitchell will be suiting up in the orange and blue come October; it seems to just be a matter of when that deal gets done and for whom. So, it’s worth a dive into how head coach Tom Thibodeau can help Brunson and Mitchell make up for some of their weaknesses on defense, which essentially boils down to how well others on the Knicks can play alongside that potential starting backcourt.

We should take a look at how these two players stack up as defenders individually before going into how they can improve on the Knicks.

Brunson, a point guard who has only played with the Dallas Mavericks before signing with the Knicks this offseason, may be undersized but he’s considered someone who tries on defense. Last season, he averaged 0.101 defensive win shares, a fairly middle-of-the-pack number amongst for guards that suited up in the league last season. Brunson is better than one might think at fighting over screens as well as using his strength to make up for his height when defending in the paint.

He was even able to guard the Suns’ 6’6 star guard Devin Booker pretty successfully during the Western Conference semifinals when the two were matched up together.

While his defensive numbers aren’t flashy, he should be able to effectively guard at least some of his smaller opponents in the Eastern Conference this upcoming season like Trae Young or Fred VanVleet, which is a relief coming on the tail end of some fairly bad backcourt defense from Evan Fournier and Kemba Walker.

With Mitchell, the Knicks would be getting a guard who was criticized last postseason for his effort, or lack thereof, on defense as his teammates picked up his slack in a disappointing first-round exit.

Donovan Mitchell’s defense is something pic.twitter.com/hUNNWL74uP

Rudy Gobert, a perennial All-Defense center and three-time winner of the NBA’s Defensive Player of the Year award, vocalized that frustration as it often forced him to have to guard the paint with his head on a swivel, not knowing if someone was blowing past Mitchell to get to the rim. His defensive win share was 0.086 last season, making him less efficient on the defensive end of the floor than Brunson.

Mitchell, however, would be a big enough upgrade to the Knicks’ rotation on offense that it would balance out his tendency to allow for other teams’ guards to take advantage of his flat-footedness. Additionally, a lot of the flack that Mitchell has gotten regarding his defense came on the tail-end of Utah’s disappointing playoff run this past season, and much of his defense was under a microscope after shots were taken by Gobert towards him. We could very well end up seeing a different level of intensity from Mitchell with a fresh start on a big market team in his home state.

Both, or at least Brunson, will need to try hard on defense in Thibodeau’s system in order to succeed. For that to happen, we should look at how Thibodeau has utilized his guards the last two years with the Knicks, some of which have been undersized just like Brunson and Mitchell.

When Thibodeau began his tenure as head coach of the team, he had limited options at the one. He eventually tapped Elfrid Payton to be his starting point guard for the 2020-21 season. The season dragged on with Payton at the helm of a surprisingly successful Knicks squad who had decided to take their defense seriously under their new coach, and they ended up finishing fourth overall ranked in defense across the league. However, Payton’s defense, with a defensive win share of 0.068, often left much to be desired due to his size and, often looked disinterested in fully committing to plays.

Those defensive holes were covered, though, by defensive stalwart Reggie Bullock and the fantastic paint protection provided by Nerlens Noel. Much like in Mitchell’s case with Utah, when Payton was unable to keep his assignment in front of him, others would be able to clean up the mess for him successfully.

Randle defended CP3 1 on 1 here really well. Moves his feet and turns his hips and forces him to give it up. Noel denies Craig at the rim after Payton gets beat backdoor. Defense forces the turnover. pic.twitter.com/GE0Q7WG0BO

Thibodeau is also not afraid to simply keep his lineups big, no matter the potential for clogging in the paint offensively. He has a propensity for loving shot-blocking centers on the floor at all times, hence his hesitation to give a Randle-Obi-Barrett a real shot despite a larger lineup making the Knicks slower getting up and down. But, that pattern could serve a shorter backcourt well. It plugs holes that might otherwise allow a cutting guard to take advantage and go off against the team, and it also increases the defensive intensity for the rest of the team to follow.

One fatal flaw in Thibodeau’s coaching, though, is his stubbornness when it comes to rotations. In his second year leading the squad, he allowed for poor defense from both Fournier and Walker to persist simply because he felt they fit best into the rest of the starting rotation of Randle, Barrett, and Robinson. Fournier was especially resemblant of a turnstile in his first year suiting up for New York, collecting a defensive rating of 112.5. He made up for it with a solid offensive effort, but it still left more questions than answers as to why a coach like Thibodeau, who prides himself on being a defensive-minded coach, would repeatedly trot out a lineup that had such a weak guard like Fournier.

Thibodeau would have to be sure that, even if Mitchell or Brunson, or both, are unable to contain someone, others in the lineup he’s surrounded them with can pick up their slack. It seems like that’s possible given the solid defense of Robinson in the paint as well as Barrett’s growth as a wing who can defend as well.

Essentially, the success of this potentially short backcourt hangs on the ability of either player to improve upon their individual defense, the coaching of Thibodeau as he tries to meld together his third straight shaken-up roster in New York, and how well the players around the two smaller guards can adapt to their shortcomings on defense.

»READ: Evan Fournier and the value of shooting specialists in a shooter’s league

»READ: What does a healthy Knicks rotation mean for Immanuel Quickley?