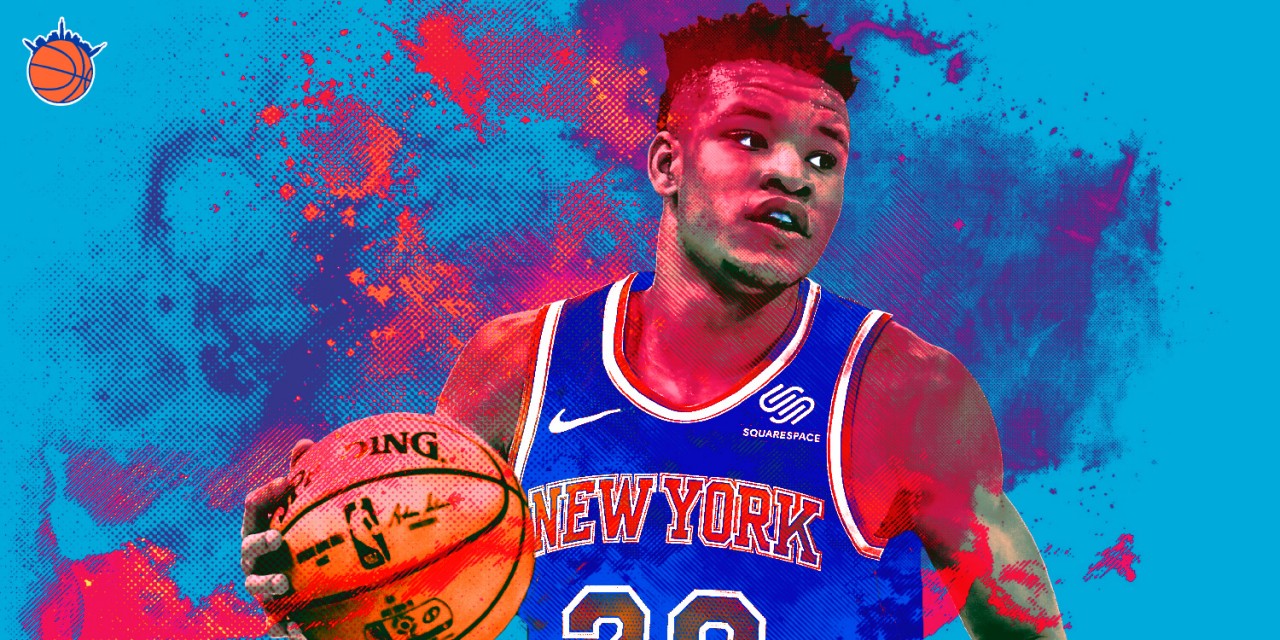 Knicks second-year forward Kevin Knox has seen minutes slip and productive plummet. It hasn’t been all his fault but the development isn’t there.

While it feels like an alternate universe now, at this time last year, Knicks rookie Kevin Knox was starting to show signs of life. The PIPM’s and RAPM’s and advanced alphabet soup stats all painted his first year as historically awful, which like with De’Aaron Fox’s rookie year, neglects the context of playing on a historically awful team, but the glimmers of hope were peeking out amidst the struggle. A double-double here, a 27-point game there, some rotations that made you think he might one day be able to fit in on a good defensive team. He even won Eastern Conference Rookie of the month in December of last season with 17.1 points and 6.0 boards a game.

Kevin Knox of the @nyknicks named Eastern Conf. Rookie of the Month.

This season, those signs of hope have mostly felt like dimmed lights.

But there are still reasons to believe he can become a serviceable NBA player. It’s no secret that he’s not in the best developmental situation, with negative spacing and and a glut of players at his best position, but there are areas he could be doing better, or at the very least focusing on with his limited minutes.

The idea this season was that after Knox’s general struggles playing big minutes for one of the worst teams in the league, the Knicks, that he could simplify his game, asked to do less. The former Kentucky Wildcat’s counting stats across the board were, by design, meant to go down this season as he took more time to process the NBA game with some slightly more talented players around him. Less to worry about, just shoot a bunch of threes and improve that split second decision-making of whether to pop a catch-and-shoot or drive on the closeout. See the situation a million times, then work on the decisions that follow like where to kick to.

But what he really needs to do to make himself a useful player is show some tenacity. It can be difficult when you’re playing 13 minutes a night and reduced to mostly wandering around the perimeter, but wander well! Make yourself open and slide to the right spots. Participate in off-ball actions enthusiastically, cut hard, and bust your ass. The advantage of playing such few minutes a game is that you should be able to lay it all out on the floor. Kevin Knox hasn’t been playing with that urgency this season. Now he had motor concerns coming out of college. Whether he is just a guy who doesn’t have that motor versus a guy who isn’t showing it because of the confidence he’s lost this season is still to be determined. One sign that it could be the confidence though is that his free throw percentage has dropped six percentage points this season.

Given more simple tasks and supposedly more spacing than last year (more spacing is not actually borne out in the data), Kevin Knox has turned out approximately similar shooting numbers. The volume is way down of course, but his points per 100 shot attempts are nearly identical, at 94.6 and 94.8, both still bad. His shot profile is better, with more than half of his shot attempts coming from three and almost half of them of the catch-and-shoot variety. Though the efficiency numbers are similar, with the smaller role and another year under his belt, we’d hope to see those numbers go up.

The thing about prospect development is that it’s not linear. Every player’s path to finding their NBA game is different, and though Knox’s time hasn’t been this year, sometimes it’ll just click for a player. The game will slow down, those decisions become easier, and the counters to your ready-made moves start to reveal themselves. The bodies don’t feel like they’re coming out of nowhere anymore as pattern recognition improves with reps. They start to see movement of help coming before it comes, so that plays like this happen less frequently:

The areas that have improved this year that we can look to as reasons for hope are that his assist and assist-to-turnover rates have improved and his block percentage has more than doubled. Those first two are encouraging because they’re indicators of better decision-making, which is still his roughest area. And the aggressiveness chasing blocks is welcome, when Julius Randle literally runs away from them.

Extrapolating from his current numbers, Knox has bust written all over him, much to NBA Twitter’s delight it seems. But let’s beat the youth drum for a second, and realize there is a path to becoming a good NBA player. He just needs some inspiration to play harder (maybe a stint in the Knicks’ G League DubKnicks would light a fire under him) and to spend all summer in a gym getting up shots, then the rest has a good chance of coming along. Now if only Mike Miller would play him at the 4.