Can the Knicks Succeed If Kristaps Porzingis Isn’t the Same Upon Return? 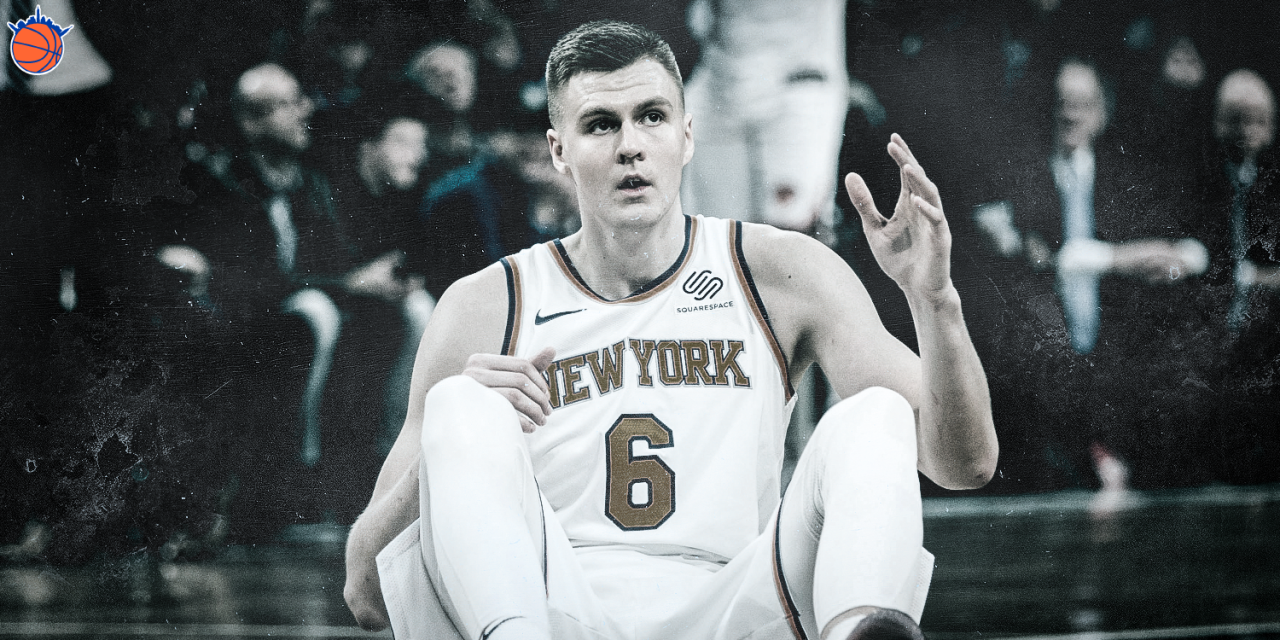 Kristaps Porzingis is unmistakably the franchise cornerstone of the Knicks, but it’s inescapable to wonder how he’ll perform on the court when he’s back from injury.

As soon as Kristaps Porzingis went down clutching his left knee after a dunk last season, the NBA world was already writing its Next Great Comeback Story.

It seemed like, though his prognosis was bleak, Porzingis would bounce back. Sure, he’d suffered a torn ACL, one of the rare injuries with a reputation of ending sports careers. Sure, it was and is unprecedented for an athlete of his size—7-foot-3—to make a full recovery from such an ailment. Sure, he might never be the same, even when he does return to the hallowed hardwood of Madison Square Garden.

But this is Kristaps Porzingis we’re talking about, someone Bill Simmons and Michael Rapaport have (somewhat facetiously) hailed “The Lativian [sic] Gangbanger!” He’s an absolute giant—not just in regards to physical stature or generational talent, but also, for lack of a better term, the aura of fated greatness Porzingis seems to carry.

The following future is “supposed to happen” for Porzingis, despite growing confusion surrounding his road to recovery:

And almost everyone—except for a handful of stereotypically pessimistic Knicks fans—believes that it will happen. It must. Porzingis is too special for this to end any other way. Right?

I don’t know. It’d be a miracle for all three to happen in that order, in the timeline to which many fans and pundits subscribe. Porzingis’ relationship with the Knicks front office has been strained to say the least throughout his career. Also, the Knicks recently revealed that KP’s knee has just improved to the point where he can run light, zero-contact drills and won’t be re-evaluated until February. With the Knicks’ current focus on widespread player development and, ahem, certain Duke draft prospects, it’d make little sense from a front office perspective to bring Porzingis back at all this season.

And when he does come back, I’d be shocked if coach David Fizdale and staff don’t put some kind of a restriction on his playing time. Joel Embiid, another prodigious center with a troubling injury history, was on a strict minutes limit his first year back on the court, in spite of his astonishing effectiveness. Kawhi Leonard, a top-five player again after one of the weirdest seasons ever from a medical standpoint, doesn’t play back-to-back games, presumably because Toronto’s medical staff prevents him from doing so. Even if Porzingis is the basketball cheat code we remember, who’s to say he isn’t held to 20 minutes a game or fewer?

Let’s take it a step further, and address the elephant in the room; what if Porzingis is just plain, old bad at basketball for a while?

Look, for the record, I think he’s far too skilled and dominant a presence on both ends of the floor to be anything less than a championship-caliber starter, even if he only gets back to something like 70 percent of his peak athleticism. But if he comes back as rusty as teammate Lance Thomas and almost everyone around the Knicks thinks he’ll be, exactly how long is his leash? It’s easy to say, “we’ll wait as long as Kristaps needs,” when you’re tanking. What happens if the Knicks do reel in a big fish this summer—a free agent-who-shall-not-be-named that rapidly speeds up the timeframe to become a contender?

The following future is not supposed to happen for Porzingis but is plausible:

I’m not predicting this. I’m not even saying it’s likely. I’m just pointing out that it’s about as probable as the proposed path to redemption and contention everyone seems to have accepted on face value.

I want Porzingis to come back better than ever, and odds are I think he will. A torn ACL is not even close to the death knell it was a few decades ago, in fact, players like Zach LaVine, Ricky Rubio, and Spencer Dinwiddie all arguably improved after going through such injuries. Hell, Paul George is a more complete player than he’s ever been, and he suffered one of the most gruesome, heartbreaking leg breaks of all time.

But the road to recovery was bumpy for each and every one of those guys. They didn’t just spend months, but years returning to form. Time complicates things, and although I believe Porzingis will one day live up to his potential, I also believe it will be a little later than New York is hoping for.

It feels wrong to utter these words in this order, but the Knicks will probably be fine in the long run, even without Porzingis transforming into the MVP monster he seemed destined to be pre-injury. To be honest, I don’t think Durant has any plans of coming to New York, but I also don’t think the Knicks need him either. I think they’re already a more attractive free-agent destination than they’ve been in years, finally washed clean of the Isiah Thomas/Phil Jackson stench, and that will eventually convert to a star player.

If that free agent never comes, they have enough young pieces and momentum to build something from the ground up. Tim Hardaway Jr. has emerged, in his fifth season, as something like a number-two, complementary scoring option. Kevin Knox, after a slow start to the season, looks like a foundational building block for years to come. Mitchell Robinson, Noah Vonleh, and Emmanuel Mudiay are all coveted assets around the league now. Frank Ntilikina, no matter how many DNP-Coach’s Decisions, will hold value until his rookie contract runs out. Coach Fizdale has earned a lot of good will, not just with this team but with players throughout the league. Trust me, the outlook is sunny in New York, even without our beloved Latvian.

But it would be so much sweeter to reach that future with Porzingis at the helm of the ship. It’s rare an athlete gets drafted by a New York team, booed (that part’s not rare), then turns those boos into raucous cheers through sheer ferociousness and confidence. KP has proven to be a terrific player thus far, but it’s his mentality that has won over fans’ hearts, and he’s brought that same approach to the darkest time of his career.

New York loves Porzingis, more than they could ever love Durant, or Kyrie, or Jimmy Butler, or whoever vecause he embodies what fans want out of someone who represents the Knicks, perhaps the most burdened franchise in all of sports. He’s a foreigner, an immigrant who moved to the biggest, baddest city in the world to make his dreams come true. And he didn’t come here to let his dreams come true, but to force them into existence. What’s more New York than that? That’s every family on every run-down block in Queens; that’s every ramshackle Chinese restaurant in Brooklyn run by an eight-year-old kid and his mom; that’s the most New York s*** ever.

“We’ve done things differently because there is no protocol for a 7-3 guy. There is no timetable for my type of body, my size and all that,” Porzingis told press at media day before the season started. And really, everything has gone according to plan since he got hurt, which is to say it’s been going excruciatingly slow. Porzingis is not close to suiting up for the Knickerbockers anytime soon; but he’s on track.

It’s up to the front office, then, to do one of two things. They can show patience with Porzingis. He is, in all likelihood, going to be out of sync when he returns, and it’ll be like that for a while. His shot will look bricky, his passing will be a step slow, his lateral movements and second-jumps will look soft. And his stats will suffer as a result. If Steve Mills and Scott Perry really believe in Kristaps, they’ll stay the course. That’s tougher than it sounds, especially since KP is up for a max extension this summer (with a qualifying offer for next season he’ll almost certainly reject).

If they don’t immediately commit to a super-max, we’ll know something happened to fracture the two parties’ relationship. We’ll know the front office will have done the other thing—committing to Porzingis while leaving an out in case the nightmare scenario I laid out comes true.

I pray that doesn’t happen. I pray KP’s rehab actually makes him stronger, like when baseball pitchers undergo Tommy John surgery and suddenly add 10 miles per hour to their fastballs. I pray that one day the Knicks will lift that Larry O’Brien hardware high above their heads, and confetti will rain down on Knox, Hardaway Jr, Zion, Vonleh, Ntilikina, Porzingis, and whoever else is on that glorious team.

But I know it won’t happen exactly that way, with zero casualties, whether that be by trade or bust. It never does. And even though I think you know that, I don’t think you’ve really considered the possibility that Porzingis just might become one of those casualties. I pray that he doesn’t. I just want you to know that it’s possible.