Can the Knicks Trade for D’Angelo Russell? 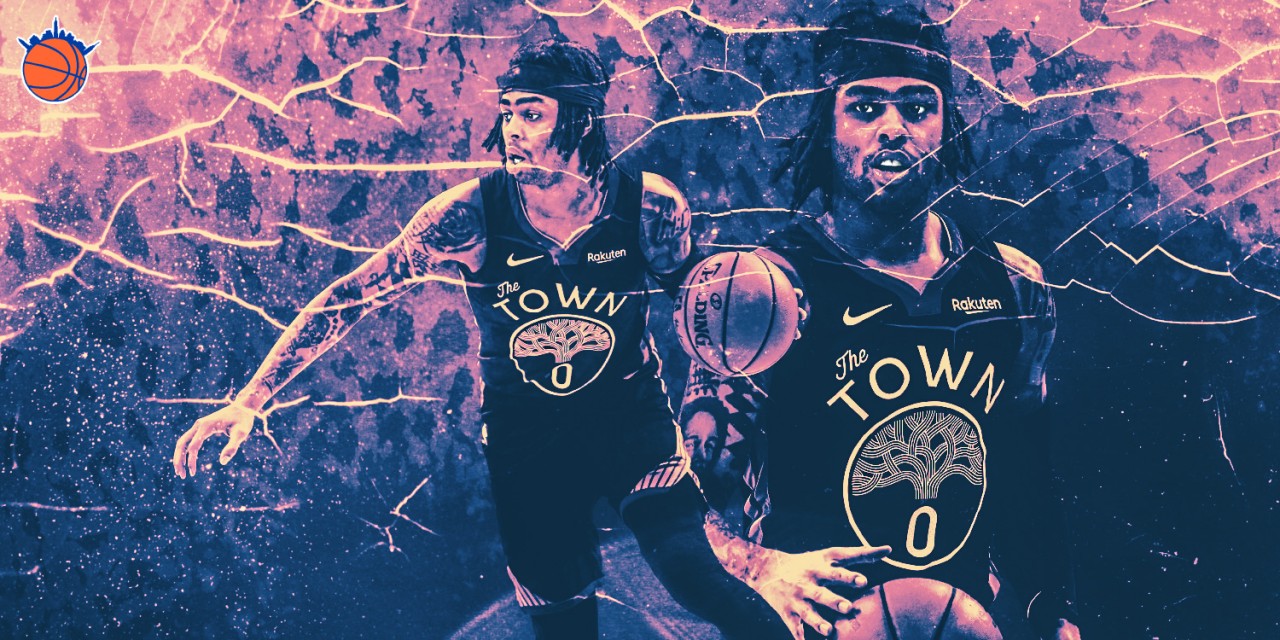 D’Angelo Russell could be the best Knicks point guard in nearly two decades, but above all else he should fit the team’s young building blocks.

Trade season is finally starting to heat up with the NBA’s deadline looming on Thursday. The New York Knicks have been a hot name in the national media, reported both as buyers and sellers in the preceding weeks. One reported a set of talks concerns a D’Angelo Russell move; Golden State is working the phones and has been in touch with the Knicks and the Timberwolves about potential Russell trades. Whether it’ll happen or not is impossible to predict, but let’s look at whether it should, and where a sticking point in the negotiations could be.

It must first be stated that D’Angelo Russell, an All-Star last season, in his current form would be the best Knick point guard of the past 10, maybe 20 years. That alone should be intriguing, since Knicks fans have been dying for strong guard play since the beginning of time.


But all decisions must be made with context in mind, and Russell is in the first year of a four-year max, $29 million AAV contract. The contract doesn’t prohibit the Knicks from competing through the next four seasons, but it could potentially hard-cap their ceiling to be paying a player of Russell’s caliber (probably pushing a top-40 level player) a quarter of the salary cap. The alternative, some might say, is filling that space over the next four years with lower-level players after missing out on more big fish, as history indicates is likely. Hard-capping a ceiling during a rebuild isn’t the worst thing when we haven’t been able to touch the floor in years.

A one-time All-Star, D’Lo fits the youngster timeline at only 23, and would be a better use of cap space than Bobby Portis and flotsam. But salary isn’t the only issue. Russell is maximized in a role where the team revolves around his ball handling, and he’s not a good enough ball handler right now to take a team constructed around him deep into the playoffs without significant help. He also doesn’t play defense, and his career thus far has been plagued by injuries. He doesn’t get to the rim all that often or finish very well. Although he’s not done growing as a player at such a young age, you’d hope he shores up those areas for improvement over the course of a four-year deal.

These are risks you take when you’re in a position like that of the Knicks. Hopefully, the team doesn’t imagine itself competing for a chip in the next four years of the deal; the fantasies of players coming to the Garden have been erased by summer 2019. One major question, if you’ve assumed no chip, is whether D’Angelo will fit with and aid in the development of the two main core pieces of Mitchell Robinson and R.J. Barrett. The other is the asking price of the Warriors.

Starting with fit: nobody is perfect for any rebuilding team. Unless you’re adding LeBron James, most rebuilding teams are not a piece away from cranking out seven more wins. Even with Russell, we’re not making the playoffs this year, so set expectations accordingly.


But his skill set on offense would be a perfect complement to Robinson and Barrett’s collective development. Russell would be a great pick-and-roll partner for Mitch, and the first Knick guard whose screens opposing defenders had to actually attempt to go over in a long time. Robinson would be setting higher screens, and getting longer runways with more decision time.

R.J.’s ideal developmental trajectory is him working on his three-point shooting, slashing, and attacking closeouts his first year on offense, and giving flat-out, cut-your-head-off energy on defense. Giving him lead ball-handler minutes is fun in spurts, but not the best way to develop his skill set right now. Russell gives the Knicks a real threat to pass and shoot, and his vision will encourage R.J. to keep cutting hard to the rim for easy buckets.

On defense, the pairing isn’t ideal, but I would say the same thing about Damian Lillard’s defense next to Barrett. Nobody is the absolute perfect fit; D’Lo is just about as good as it gets and he’s definitely the best available.

Given that the Knicks front office has proved over and over again to have no coherent plan, the best we can hope for is for them to just go get some good players. As much as I would be upset if we kept Marcus Morris this deadline, he has been one of the few bright spots on the Knicks this year, and watching his maestro displays from the midrange in some crunch time games has been a thing of beauty. Get guys like Morris or D’Lo together and the average fan experience will improve. Not to advocate for a general win-now approach, but since the Knicks can’t even commit to a good rebuild, they might as well have some fun players to watch along the way.

The other sticking point, of course, is the asking price. Should the Warriors actually want or value whatever it is that Bobby Portis does, that’s great. The deal on the table would probably end up being Portis, Frank Ntilikina, Allonzo Trier, and the two Dallas picks. Try to drop one of the Dallas picks or Trier, but give both if that’s the sticking point for the Warriors. Ideally, you would see how they respond if it’s Damyean Dotson or Dennis Smith instead of Ntilikina first, but they’ll almost definitely want (and probably value more than we do) the French guard.


The deal gets a little dicier if they’re asking for the Knicks’ own picks, but they should be willing to part with this year’s first-rounder instead of the two Dallas picks given the weakness at the top of this year’s draft and flattened odds that make it unlikely they end up there. Does Portis, Dotson, and this year’s pick get the deal done? What about Ntilikina instead of Dotson in that deal?


Apparently, the sticking point in negotiations with the Wolves is that they weren’t willing to give up this year’s lottery-bound pick. The Knicks should be willing to give theirs up, but draw the line at an asking price that includes Frank and any additional firsts on top of that. Or Mitch/Barrett. But we’d hope the Knicks already know that.

Russell becoming a Knick would bring some much-needed excitement to the Garden. We’d reassemble the old Laker buddies of yesteryear, both much improved, give Mitch and R.J. another player that fits on-court and in our timeline, and maybe bring us close to contention over the next few years as our pieces continue to develop. The question is whether the Knicks are willing to pay what the Warriors are asking.