Can the New York Knicks Sneak Into the Playoffs as an Eighth Seed? 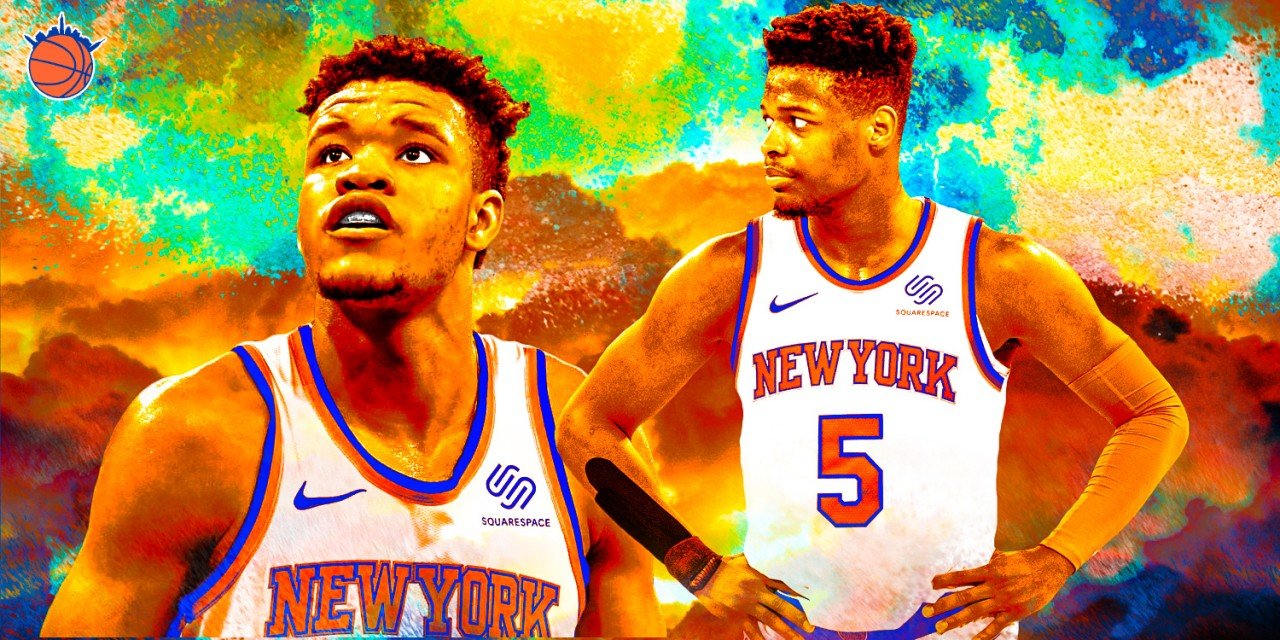 If you ask Vegas or statistical projections how many wins the Knicks will win next season, New York will fall well short of a playoff berth.

After tying the franchise’s record for fewest wins last season, the Knicks look to bounce back with a new roster. Will the fresh faces turn the tide of the losing franchise or will the Knicks continue to disappoint?

While many fans have hope to make into the postseason, there are a few reasons to dampen expectations.

How Much Can the Knicks Improve?

The eighth seed in the Eastern Conference last season was the Detroit Pistons, with a 41-41 record. The Knicks would have to win 24 more games than last season to match the Pistons’ .500 record. Only five teams have improved that much between seasons in the past 10 years, with almost all those teams adding Hall of Fame-caliber players during the offseason (Ray Allen and Kevin Garnett joining the Boston Celtics in 2007–08, James Harden joining the improving Kevin Durant and Russell Westbrook Oklahoma City Thunder in 2009–10).

Did the Knicks add players who can bring them to a jump similar to those teams? Using each individual player’s Win Shares (WS), advanced statistics project this Knicks team to finish with 31.9 wins.

What Win Shares does not project are the contributions of rookies R.J. Barrett and Ignas Brazdeikis. Even if Barrett can match reigning Rookie of the Year Luka Doncic’s WS, 4.9, and Brazdeikis can match Trier’s surprisingly successful rookie campaign, the Knicks are still below the .500 threshold at 36.7 wins.

?? Good morning to absolutely nobody, not a soul, except @RjBarrett6 ?? pic.twitter.com/NIM02TdNfY

An aspect often overlooked when projecting the Knicks’ season is the rest of the NBA’s development. Fans of a single team often block out the rest of the league’s improvements while only focusing on their own favorite team. Only five of the Knicks’ 17 wins last season came against playoff teams. The worst team in the league fed off the other low-win teams, often beating the Atlanta Hawks and Phoenix Suns. Both those teams improved along with the other recent tanks—Bulls, Heat, and Grizzlies. Most of the bottom dwellers improved and added more guaranteed successful players than New York; to stand out amongst the East is not as easy as it once was.

New York’s offseason was interesting. Although most of the signings were not bad players, it is unclear what Steve Mills and Scott Perry are aiming to accomplish.

All good teams have some sort of identity. Even the worst playoff teams last season had something they knew would be better than their opponent: the Orlando Magic had the number one defense over the last 30 games of the season, and the Brooklyn Nets had versatile, smart guards that disrupted defenses in unique ways.

What are the Knicks’ strengths? 60% of the roster was not on the team last year, and only two players were on the team in 2017. It’s hard to develop a powerhouse with so much turnover.

The only strategy that makes sense with the off-season signings is the success of Fizdale’s dream: a team that has a lot of possessions with everyone shooting threes. Julius Randle and Marcus Morris are both above-average shooters for their position; Wayne Ellington, Reggie Bullock, and Brag-a-deikis are three-point specialists; and Elfrid Payton and Barrett can help push the pace.

The front office should be envisioning a team where the ball mainly stays in Dennis Smith Jr., Payton, and Barrett’s collective hands as they speed past defenses then pass to a slew of efficient three-point shooters or the two rim threats, Taj Gibson and Mitchell Robinson. This seems like the best scenario for the Knicks’ signings, but will players like Morris and Randle be willing to forfeit touches for team success?

None of these players like to let the offense flow with the ball out of their hands. Obviously, their minutes should be somewhat staggered, but along with Robinson, these are the most important players on the roster. Their development will set the stage for how good this Knicks team will become; they need to play together as well as play in the final stretches of games.

Even if everything comes together and the Knicks make a lineup of Smith, Dotson/Ellington/Trier, Barrett, Randle, and Robinson work by taking advantage of Robinson’s low usage and efficient scoring with Smith, Barrett, and Randle’s passing skills, it would take multiple reps and failures before this lineup truly blossoms.

To create a good situation out of this current “only one ball” problem will take a great amount of pride-swallowing and individual coaching. Will the players be up to change their game for the better of the team and can Fizdale convince them?

Fizdale is Unproven as a Head Coach

David Fizdale is still an unknown commodity as a head coach. Although the players praise him publicly, which he reciprocates often, he has not proven that he can run an efficient NBA offense. While Mike Conley and Marc Gasol arguably had their greatest individual regular seasons during Fizdale’s first year as the Grizzlies’ head coach, he was fired in the beginning of the next season over conflicts in the locker room.

While in New York, the head coach has shown little promise in offensive strategy. Fizdale’s playbook was purported to be a modern system of space and pace, but the Knicks were in the bottom half of the league in three-pointers attempted, made, percentage, and overall pace. The Knicks were the youngest team in the league last year, so while they were not expected to be world beaters, there was a lot of advantage in athleticism with young players running the show—which the Knicks failed to capitalize on in a way that fellow young teams, the Hawks and Sacramento Kings, could.

In spite of the Knicks’ additions in improved shooting and athleticism this offseason, it’s unclear how Fizdale will be at creating a flowing offense with all the pieces available given how ineffective he was at using the team’s advantages last year.

There is only a slim chance that the Knicks will leave their forever home, the lottery. These are big hurdles keeping the team from competing in April and May.

There’s a lot of good that could happen, and will need to happen, to push the the worst team into one of the 16 best teams in the league—but one would need to put a lot of trust in journeymen, young players, an unproven coach, and the Knicks’ front office in order to fully believe they can make that jump.

»READ: Three Knicks that could make the 2020 NBA All-Star Game