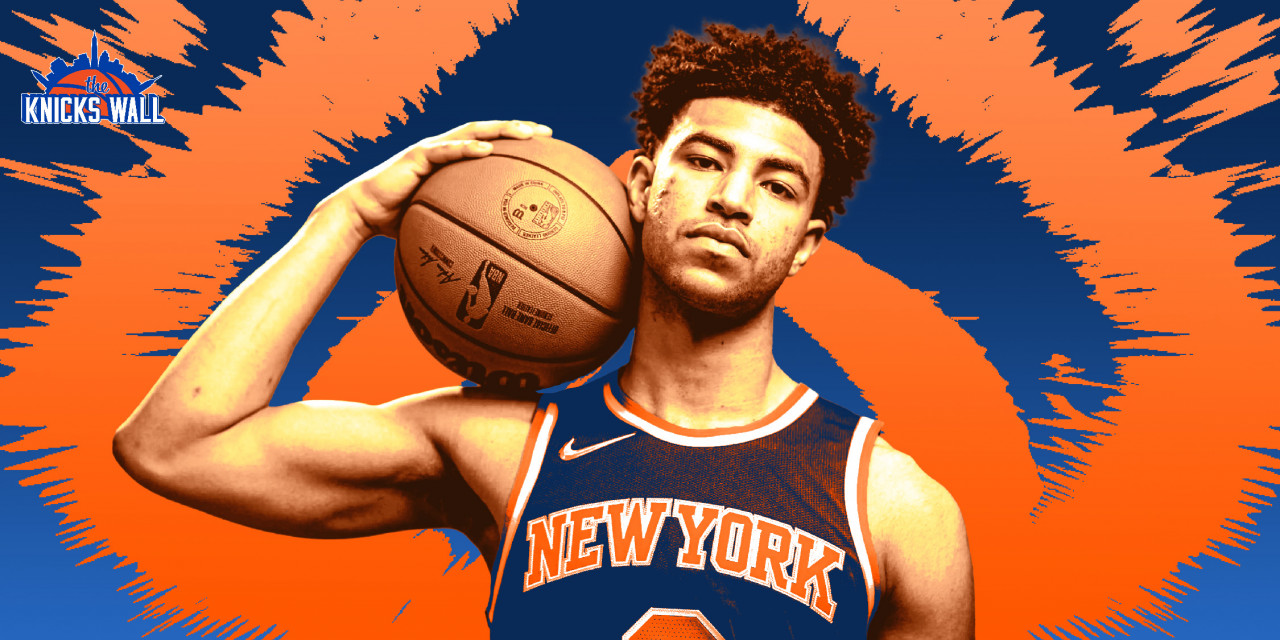 Quentin Grimes is a talented 3-and-D option who may or may not get his chance to shine as a rookie depending on New York’s rotation.


As the 2021–22 season draws closer, the typical lists become visible. Top-100 lists will create conversation, the analytical projections will set expectations, and prediction posts and podcasts will allow some of the world’s best pundits to outline their exact thoughts and why. In all of this, rookies often get miscast. Like Cade Cunningham, Scottie Barnes, and such, the top rookies will be mentioned, but nothing more.

For the New York Knicks, the same will happen. We’ve already seen Julius Randle make several top-100 lists, and the conversation of where the Knicks will rank in the Eastern Conference has been daily since their solid offseason and the moves made around them by teams like the Chicago Bulls, Boston Celtics, and the Miami Heat. Soon, we’ll get official predictions on the Knicks—somewhere between the fourth seed and the seventh seed—but the likes of Miles McBride and Quentin Grimes are going to be an afterthought for the near future.

That may be wrong for both rookies, but mostly Grimes. McBride will get plenty of chances as a perfect fit for a Thibodeau point guard with two veteran point guards ahead of him. Grimes, however, appears to be the perfect player to contribute as a rookie. Even though the Knicks have several options ahead of him, it wouldn’t shock to see Grimes make his way through the rotation and impact the Knicks right away.

Coming out of the University of Houston, Grimes made his mark as a wing player and overall offensive threat, averaging 17.8 points, 5.8 rebounds, and 2.0 assists in his final college season. What flashed was his ability to knock down shots from the outside, hitting 40.3% of his threes and finishing as a career 36.6% outside shooter in college. That, combined with his defense, allowed Grimes to profile as a potential first-round pick, where the Knicks selected him with the 25th overall pick in July.

And that’s where Grimes can win right away. At 6-foot-5 with a 6-foot-8 wingspan, Grimes combines good size with physicality to work as a defender. He may never emerge as an elite defender, but should never be out of place defensively. Under the tutelage of coaches Tom Thibodeau, Johnnie Bryant, and Darren Erman, Grimes could be a consistent 3-and-D threat for the next decade.

At Las Vegas Summer League, we saw exactly what Grimes can do. As McBride and Immanuel Quickley ran the show, with Obi Toppin spearheading New York’s offense, the former Houston sharpshooter fit in perfectly as a catch-and-shoot option. He flashed a bit of everything, too, showing a bit of driving ability, a mid-range game, and a shot off the dribble—all of which will be important for impacting New York’s main roster this upcoming season.

Will Grimes crack the rotation? Not likely. New York has RJ Barrett and Evan Fournier as starters, with Alec Burks and Immanuel Quickley as backups. Those four in place will likely make up New York’s wing rotation, which makes things difficult for Grimes, the same way Derrick Rose and Kemba Walker make things tough for McBride.

There is still vast interest in Grimes’ skill set amongst the Knicks roster. New York made an emphasis on adding multiple ball-handlers and creators who can help generate more offense. Guys like Walker and Rose, who create pressure at the rim, are almost the perfect kind of players for Grimes to play alongside, as his moment allows him to find open shots. Then, get into the likes of Julius Randle, who could use his driving ability and gravity to produce more open shots, and someone who can shoot like Grimes would instantly benefit.

The Knicks have several talented players up and down the roster as they look to build upon a strong 2020–21 season. As a result, the rookies are on the outside looking in to start the regular season. Grimes, the 25th overall pick in the 2021 NBA Draft, is someone who, in a normal year, would create some hype for his ability to jump into the rotation right away and provide spacing and defense. With some offseason moves, Grimes may have to wait for his moment in glory.

Still, the combination of shooting, defense, and coaching we may see from the former Houston Cougar could impact the Knicks sooner rather than later.