Can the Knicks Keep Up Their Good (and Lucky) Defense? 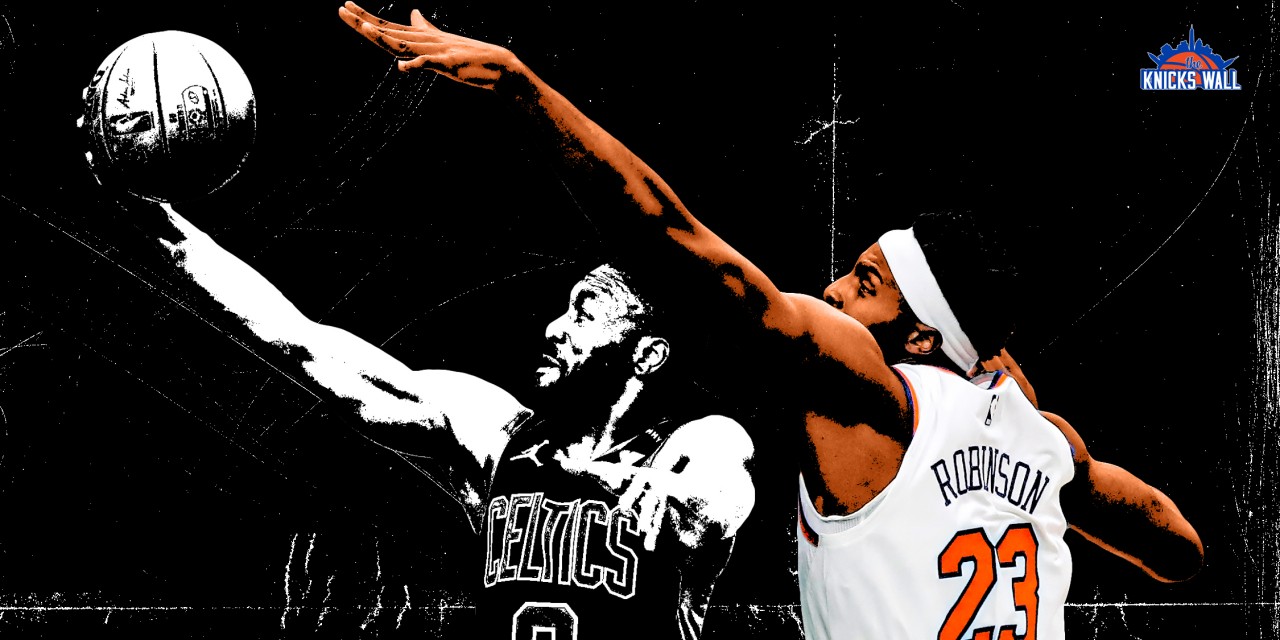 The Knicks’ defense has been some combination of lucky and good in the first season under Tom Thibodeau, but there is a fair chance they can stay consistent.

Thankfully, we’ve entered a new era of respecting facts, so here are a few. (If you’re reading this, you’ve probably seen a variant of these numbers floating around). As of Monday, Tom Thibodeau’s New York Knicks rank (via NBA.com):

Yes, it’s only 16 games. Fine, throw the numbers out. By any measure, Thibodeau has undeniably made a noticeable impact on the Knicks defense. How has he done it?

For one, they play at the slowest pace in the NBA. This should not come as a total surprise, as Thibodeau’s Chicago Bulls squads were frequently near the bottom in possessions per game. They aren’t quite the ‘90s Knicks, but it’s working for now.

Secondly, the Knicks have either defended the three extremely well … or have gotten extremely lucky. Regardless, the other team is missing shots from beyond the arc.

Traditionally, Thibodeau is kosher with surrendering non-corner threes as long as the paint is cut off and the closest defender sprints his darn hardest to contest the jumper. His signature “ice” pick-and-roll coverage aims to funnel ball-handlers to the sideline or into the lane and use help to protect the rim, encouraging either mid-range looks or kick-outs.

The approach seems a bit counter-intuitive in an era when teams are increasingly seeking threes, but it’s been a successful strategy to this point. As noted above, New York opponents are shooting a league-worst percentage from downtown despite the fact that New York is allowing the fourth-most tries per game.

It’s hard to assess how much of this is good fortune versus good execution (you may have heard: it’s a “make-or-miss league”). In last Thursday’s 119-104 win at the Chase Center, the Knicks held Stephen Curry to 5-of-14 and Golden State to 9-of-38 (23.7%) from deep. In Sunday’s loss to the Portland Trail Blazers, the Knicks found themselves trailing 70-50 at halftime thanks to an onslaught of tip-your-cap triples from Damian Lillard and company that no defense could prevent. Sure enough, the Blazers regressed in the second half, enabling the Knicks to grind back into the game. In both games, the Knicks made their opponent earn good looks (a gassed Knicks group was a step slow in Friday’s game versus the Sacramento Kings—the second leg of a back-to-back).

On the other hand, the Orlando Magic and Boston Celtics combined to shoot 7-of-42 on open threes over two Knicks wins prior to the road trip, per The Athletic’s Mike Vorkunov, skewing the numbers in the Knicks’ favor. In fact, according to craftedNBA’s model, the Knicks are the luckiest team in the NBA when it comes to outside shooting.

Whether these trends continue or not will be a crucial determinant in whether the Knicks can stay in the race for the play-in tournament or sink into the front of the lottery. (As Vorkunov recalled, the Milwaukee Bucks and Toronto Raptors fielded elite defenses in 2019–20 despite finishing bottom two in three-point attempts allowed.) Yet, it’s hard to imagine the Knicks can continue giving up threes at this volume and produce this many bricks. Notably, Thibodeau’s D will get its best test of the season on Tuesday against the Utah Jazz, who are second in the league in three-point percentage.

Additionally, consider the rim protection. To the surprise of no one, Mitchell Robinson has been lockdown around the basket. Opposing players are shooting 60.1% against him in close-range situations (that’s good), he’s averaging two blocks per 36 minutes, and, crucially, has cut his personal fouls per-36 minutes down from 4.9 to 3.3.

Nerlens Noel has been nearly as good, too. Opponents are shooting 59.2% on him from close range, and he’s averaging 3.6(!) rejections per 36 minutes, aptly holding down the fort inside when Robinson sits. Overall, the Knicks are 10th in opposing field goal percentage in shots under six feet, per NBA.com.

Of course, there is plenty of room for improvement, especially assuming opponents starting hitting more Js. The Knicks have been a middle-of-the-road team across the board against the pick-and-roll. The scrambling to contest help can lead to over-rotating and biting on fakes. They can rebound a bit better (16th in defensive rebounding percentage). And, as is customary with Thibodeau groups, the Knicks rank 31st in turnovers created, an area that could help speed up a plodding offense and earn easy points (also: press more!).

Above all else, though, the Knicks’ consistent effort has been as much of a boon to the success of the defense as any tactic. This early into a weird season, perhaps it’s more useful to focus on a simple eye-test evaluator like “trying hard and playing smart and together” than any advanced metrics, anyway.

For example, this possession ends in points for Portland, but check the chemistry between Immanuel Quickley, Kevin Knox, Noel, and Obi Toppin—who have played under 20 games together—and try not to give Thibodeau and his staff some love:

“The most important statistic is the winning, and we still have a long way to go,” Thibodeau said last week, via SNY’s Ian Begley. ”Sometimes, people get locked into numbers. And you can make numbers say a lot of things. But the reality is the most important number is the winning part of it. Did you score more than our opponent did? That’s what matters.”

Julius Randle, R.J. Barrett, and Knox, in particular, seem to have made great strides on the defensive end.

As The Knicks Wall’s Sean Carroll noted, lineups with Randle on the floor have been above-average defensively, and have guarded the three-ball well (statistically). The predominant starting five of Elfrid Payton, Reggie Bullock, Barrett, Randle, and Robinson has been tough to score on, too, per TKW’s Quentin Haynes, in part because of Barrett and Randle’s personal improvement.

That effort has benefited the team’s one-on-one defense, as the Knicks are top 10 in defending against isolations. This is where the defensive talent of New York’s point/combo guards (Payton, Austin Rivers, Immanuel Quickley), along with Barrett’s development and the competency of Alec Burks and Reggie Bullock comes in handy. Even in a subpar performance against Sacramento, the Knicks effectively kept De’Aaron Fox in check (7-20 FG).

Most of these things are not sustainable. But, as Thibodeau knows better than anyone, effort can be.