Can Tom Thibodeau Get the Knicks Back on Track? 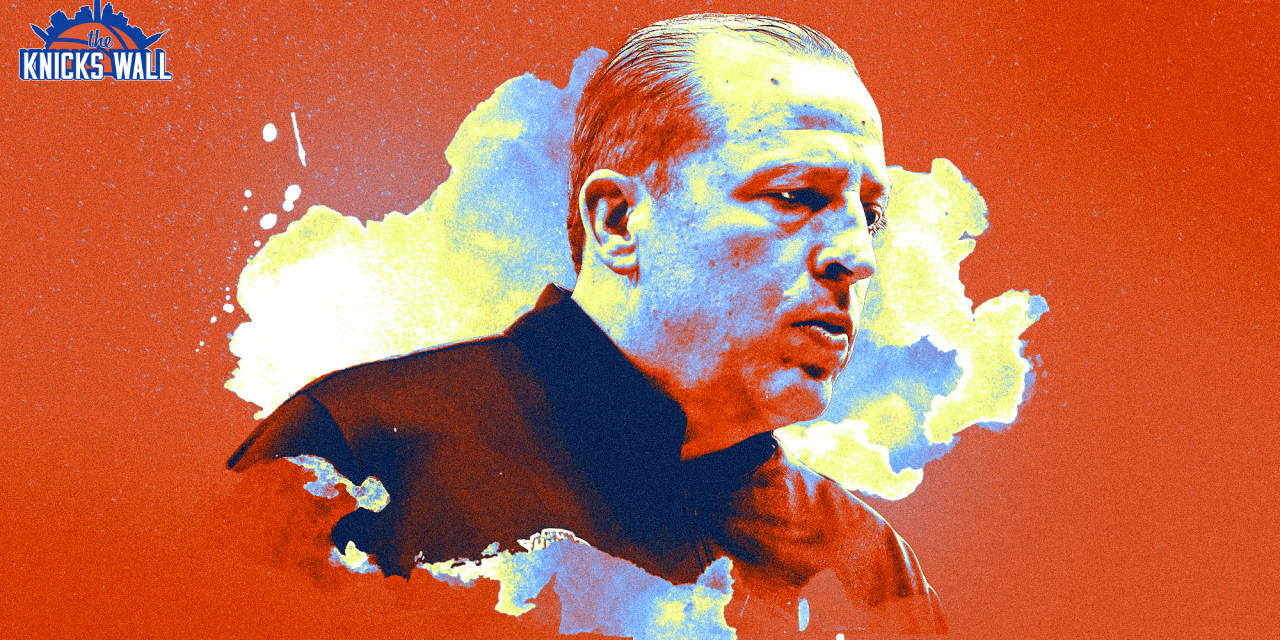 The Knicks have greatly disappointed so far this season. The ship can be righted, but its captain, Tom Thibodeau, must be willing to make course corrections.

Despite winning four of their last five games, the New York Knicks are in desperate need of change. We’ve seen the fall, then rise, of Kemba Walker as the starting point guard, Obi Toppin’s further ascension as a role player, and the early returns of the 2021 NBA Draft, specifically Miles “Deuce” McBride and Quentin Grimes coming into their own in limited minutes. Despite that, the Knicks rank 19th in offensive efficiency, 18th in defensive efficiency, and ninth in the Eastern Conference leading up to their game against Oklahoma City.

It calls for some changes. The Knicks are, at worst, bad, and, at best, stuck between playing their kids and their vets. Tom Thibodeau has been very hesitant to change his lineups much at all, with the Walker move this season being the only legitimate change. Even last season, he waited until Game 3 of the first round to fully remove Elfrid Payton out of the starting lineup and rotation. Unlike last year, the Knicks aren’t rolling, so something needs to be adjusted.

Let’s talk about my ideal rotation. It’s a change from the current group. Since Derrick Rose is out for the next seven weeks or so, here’s my group, starters to reserves:

The ultimate question here is: Does Thibs have the ability to adjust? It’s a bit of an unfair question for a successful NBA coach, but historically, we’ve seen Thibodeau with short rotations, slow basketball, and leaning on his starters. The Knicks need almost the opposite of that. At its core, this is a team that needs to run the floor, create threes and play 9-10 guys a night. This is a team that needs some stretches of Toppin at center, Barrett at the 4, and Immanuel Quickley running the show at point guard.

And, for starters, Thibodeau isn’t exactly keeping up with his “the best players will play” mantra. As I mentioned before, Toppin should be getting more minutes, but he wasn’t even giving the young players a chance to prove themselves before the COVID outbreak either. Quentin Grimes, who looks like a high ceiling wing thanks to his solid defense and outside shooting, didn’t see the floor until players missed time, and now he has his first career start under his belt 10 games later.

Last season, one of the more frustrating things—admittingly, just for me—was the lack of innovation and testing throughout the regular season. As a result, the Knicks ran into a buzzsaw against the Hawks, made one true adjustment, and got knocked out in five games in the first round. When Julius Randle was stifled and Barrett went ice cold, New York had nothing to counter. At 17-18 and no real chance to win the NBA championship this season, the Knicks should be incorporating some of their younger players with more minutes, whether it be with them leading the charge of them as the assets to get a star.

Will Thibodeau adjust? It’s tough to say, but I’ll lean no. He did push for more outside shooting in the offseason, but another step is needed. With several players on this roster who can not only help turn the tide for New York this season but can form a proper rotation that offers balance on offense and defense, Thibodeau has to be a bit more open to shuffling the rotation around more, both on a nightly basis and on an in-game basis, as his trust in his starting lineup has been misguided in the first half of the year.

Even before Julius Randle entered health and safety protocol, the Knicks needed to shift some of Randle’s minutes over to Toppin. While Randle plays about 35.3 minutes a night, Toppin clocks in at just 15.7 minutes per game. The eye test suggests that Randle could use some rest, while Toppin could use those minutes, just to see where the second-year big stands with larger minute samples.

Toppin is currently averaging 19.6 points, 8.7 rebounds, and 2.3 assists per 36 minutes leading up to perhaps his first start of the season against Oklahoma City. His energy is infectious, a legitimate gamechanger in the second unit. He doesn’t need the ball to be an effective player and he’s not a complete zero on defense. All those things could change New York’s offense. For the good? That remains to be seen. However, it’s safe to say that Toppin has effectively modified the weaknesses in his game to be a solid player.

These additional minutes could assist Toppin in weaker areas. He has flashed solid pick-and-roll play—capable of finishing above the rim with ease—but there’s room for improvement. The spacing could be a concern, as Toppin is shooting just 21.6% from the outside in a small sample. Though the 2.3 assists per 36 suggest a fine passer, I would like to see Toppin expand on that part of his game.

Moving Evan Fournier to the bench

This is the one move the Knicks should do when everyone gets back to full strength, even if I don’t 100% agree with it. If Kemba Walker is going to remain the starting point guard, then he can’t play with Evan Fournier. The trio of Walker-Fournier-Randle has played the second-most minutes together and sports a -4.9 Net Rating. It’s not the worst, but when you consider the first seven three-man groups are all from the starting lineup, it points to a starting lineup that has struggled for the entire year.

Randle remains a mainstay in the starting rotation and Walker, especially with Rose out, seems like he’ll continue to get the starting job. That means Fournier, who signed a four-year contract worth $78 million just this past summer, would have to slide into a sixth-man role.

While the optics of that would sting, it might be the best move for both parties. The Knicks can get an offensive bump while Rose is out in the second unit with Quickley, Fournier, and Grimes working. As for Fournier, this would be a chance to get his season back on track. Currently averaging 13.2 points and a career-low 41.1 field goal percentage, Fournier is in the midst of the worst season of his career. The shooting numbers are at a career low and the defense has taken a step back this season.

BACK TO BACK THREE BALLS FOR FOURNIER pic.twitter.com/AGEiqnV61u

However, Fournier remains a deadeye shooter, shooting 36.9% on six threes a game. His outside shooting is still a weapon to open up the offense, but what has been underutilized as him as a creator. Per NBA.com’s playtype data, Fournier sports a 1.05 PPP as a pick-and-roll ball-handler and a score frequency of 43.4% in those plays—good for first on the Knicks and currently ranking him in the 91st percentile. The problem? Just 21.6% of his plays are as an operator.

Moving him into the second unit with another ball-handler like Quickley, a sharpshooting threat in Grimes and, when Randle comes back, a true pick-and-roll lob threat in Toppin, I think that responsibility would be huge for Fournier and allow him to have a much stronger second half. Moving Fournier to the bench is a move that could hurt his confidence more than be helpful and, again, not great having to move your premier offseason signing out of the starting rotation not even 40 games into the first year of his four-year contract.

But what’s done is done. Now, you have to figure out how to get the best out of Fournier, and with Walker starting now, it’s tough to place Fournier back in the starting lineup with Waker and run the same starting lineup that has harmed New York for much of the season. Putting Fournier on the bench, giving him 25 minutes a night, and allowing him to run some pick-and-rolls and get him back on track.

The Knicks are winners of three straight and are looking to make a charge back into the top six of the Eastern Conference. That pursuit took a huge hit with Randle being out due to COVID protocols. Without Randle, Rose, and Noel at the moment, the Knicks will have to adjust and shuffle the rotation and find a way to get wins and continue to move up the conference.

However, I think this is a very important stretch in Knicks basketball. New York has a chance to not only win but allow the young guys to be the catalyst in winning basketball. Randle’s loss is Toppin’s gain, as the second-year pro gets to shine in larger minutes. Barrett should see more time with the ball, Quickley should see some time at point guard, and the 2021 draft class—Grimes and McBride—should see minutes to help the second unit.

This is also a time for some adjustments with the veterans. Though the sample size is small, Kemba Walker seems rejuvenated and should reclaim his starting point guard spot, but that could spell a change between Alec Burks and Evan Fournier. All things that Thibodeau should sit down and figure out how to handle and adjust if the Knicks want to have any chance to move into the top six.

Calling this the most important stretch of Knicks basketball is premature, but it is the most interesting as it offers the team and its fans a potential glimpse into the direction of the team moving forward.