Cap Room and Cognitive Dissonance: On Rooting for the Knicks to Lose at Staples Center 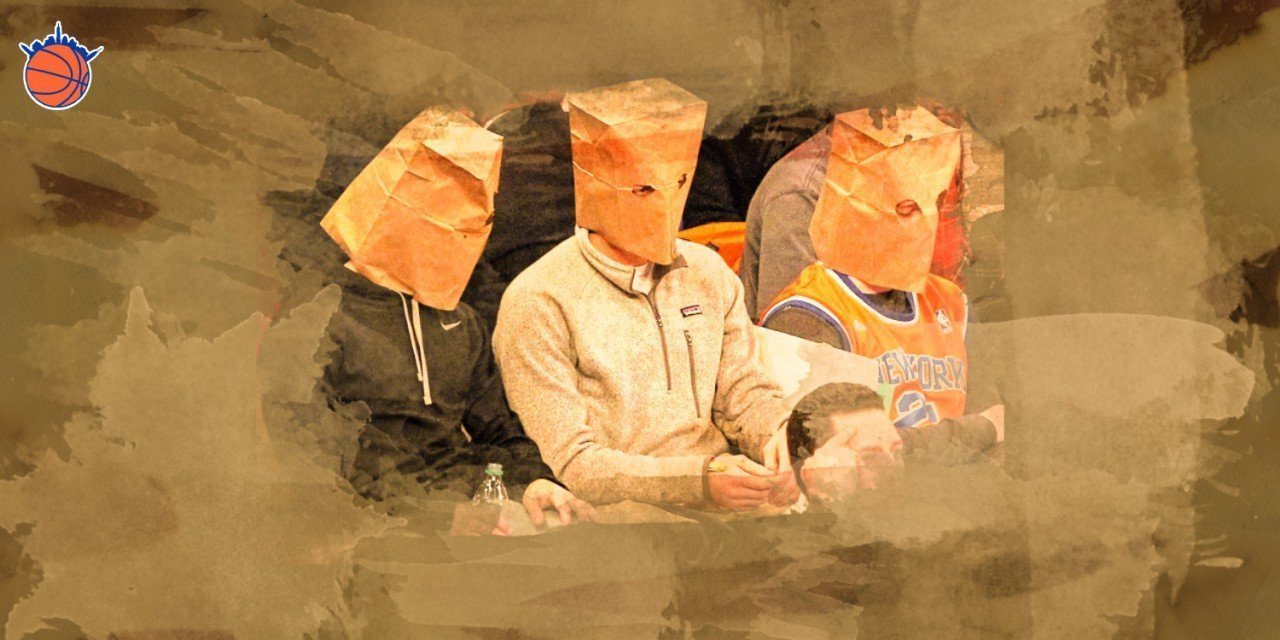 Our dispatch from Los Angeles, where a pitiful Knicks loss to the Clippers gave staff writer Steven Louis more time to ruminate on rooting for your team to lose.

Going to see your favorite team play a road game is always a good time. Maybe it serves as a testament to your fandom, or how dutifully you’ve ingrained it into your adult life. Maybe it makes for a worthwhile contrast, where you’re from and where you’re at now, through the lens of something comfortable. Maybe it’s an unimpeachable excuse to talk shit and yell “debate me, cowards!” at everyone in your general direction. Maybe it’s necessary for upholding communal traditions.

Maybe I’m, like, a “good guy” for going to see the Knicks get molly-wopped by the Clippers on a Sunday?

No, I’m an asshole—I’m sorry. Assuming you accept my apology (thank you), I would like to think about just how weird it is to support the Knicks all the way across the country, and low-key keep your fingers crossed for the L. There were a lot of Knicks fans at Sunday’s Staples Center loss; who knows how many of them actually wanted the Knicks to win the basketball game? Why go to the arena at all? Such cognitive dissonance, plus $12 domestic draughts and a medically recognized allergy to Luke Kornet should surely lead to watching on my computer or skipping this nonsense entirely.

But this was about Knicksing in public, dammit! The amalgamation of flexing and self-deprecating that defines rooting for this franchise. Cheering for the very concept of the New York Knicks, and romanticizing just how so extremely chill it would be for them to add a couple of superstars this summer. I went to watch Emmanuel Mudiay plow into contested layups, and I was hollering for each one with M.O.P. ad-libs.

Being a Knicks fan is prideful, vain, silly. It’s so much better to be silly with other people than to do it alone. Is zooming in and lip-reading Kyrie Irving and Kevin Durant at All-Star more forgivable if the whole party is doing it with you? I drank a few beers, set fire to my Pat Riley effigy, rapped Fabolous’ “Breathe” in the mirror, and went to downtown L.A.

The game itself: not great for the New York Knicks! (but, also, very good for the New York Knicks). The Clippers hit threes at an absurd rate, got the switches they wanted at will, and unleashed Montrezl Harrell in the paint (the season that dude has put together is so impressive). Landry Shamet had 18 first-quarter points; the Knicks had 20 altogether. An inspired 1-of-6 shooting performance from Kevin Knox. Henry Ellenson played 15 minutes, registering more turnovers (two) than buckets (1-of-5). Alternating drive-and-kicks between Mudiay and DSJ. Straight into my veins

This is a first half score from an actual, professional basketball game pic.twitter.com/J09YCOBYeo

The few positives: the Knicks only lost by 27 when that final buzzer hit, Mitchell Robinson had another fantastic outing, and my friend Jake bought a cinnamon-sugar pretzel that kinda banged—it briefly brought me back to the Auntie Anne’s at LaGuardia. Be still, my heart.

I peeped a David Lee jersey, and an old school Starks one, but the sight to see was what Knicks fans did to no. 6 jerseys. Duct-taped corrections of “ZION” and “KD” and all the other shit you’d imagine. One person was actually just wearing Tyson Chandler’s no. 6! Remember when the Knicks had a DPOY at center? With the Knicks down infinity, the corridors of Staples Center were reserved for predictions (consensus: the Knicks are getting Kyrie and KD), WFAN-style lamentations (consensus: the new NBA draft rules suck) and straight-up head-assery (consensus: bacon, egg, cheese, saaalt, peppaaah, ketchup). It was Clippers mascot Chuck the Condor’s birthday, so at some point during the fourth quarter, I ruminated on how morbidly depraved a Dolan-approved team mascot would look.

It’s a labor of love to root for a bad team that’s developing its young talents for future competition. It’s so truly stupid to root for a bad team that links itself to free agency rumors. So it goes. The Knicks dropped to 13-50. With Phoenix’s (hiiiiiilarious) victory over the Lakers this weekend—and Monday’s win against the Bucks—New York is now tied in the win column for the league’s worst record.

Sunday’s loss was an important one. Every forthcoming L is crucial. I found it wild to see how many fans, from New York or otherwise, came out for this stage of expectation building. Is New York fandom that different? Did the Sixers and NBA Reddit make “process” losses a guilty pleasure? Why is Chuck the Condor kissing my forehead? Spend too much time thinking about these Knicks, and The Fear kicks.

I’ll end on this: the Knicks rule, hell yeah the Knicks rule. Kyrie and KD and Zion and Anthony Davis are deadass Voltron-ing this summer, and Jadakiss is still top five dead-or-alive. Knicksing in public is sloppy, but so far from home, I felt the need to indulge myself. Mitchell Robinson is the future. I love you, Knicks. Now please keep losing.