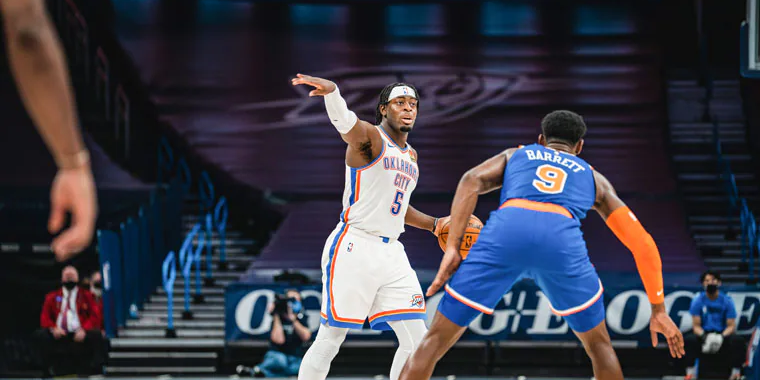 RJ Barrett scored a career-high 32 points along with Julius Randle’s second triple-double this season to power the Knicks past the Thunder on the road.

The New York Knicks (20-19) defeated the Oklahoma City Thunder (16-22) by a final score of 119-97. For New York, R.J. Barrett finished with 32 points, five rebounds, three assists, and three steals, while Julius Randle backed him up with a triple-double: 26 points, 12 rebounds, and 12 assists. For Oklahoma City, Luguentz Dort had 14 points, six rebounds, and five assists.

On the surface, this game was a bit of a mess from both sides to start, with Shai Gigleous-Alexander and George Hill out for the Thunder, while the Knicks were without point guards Derrick Rose and Elfrid Payton. Arguably four of the best ball-handlers and creators were out for this game. At first blush, you would think it would impact both offenses.

But only one of these two teams felt the absence. New York started slowly, while Oklahoma City got off to a blazing start, shooting 70% from the field in the first quarter. The Knicks couldn’t stop anything the Thunder threw at them; drives, backdoor cuts, mid-range floaters, everything was going down for OKC, with Dort and his ability to get to the basket leading the way.

However, the Knicks got back into the game, and even led at the half, thanks to Immanuel Quickley. Backing up Frank Ntilikina to start, Quickley found success as Ntilikina picked up two quick fouls. His shooting was prevalent in getting New York back into this game, but his ability to just handle the ball and bend the Thunder defense slightly was also key.

The second half saw New York carried by the trio of Quickley, Barrett, and Randle. All three had moments that, hopefully, pushed Thibodeau to them together more often. Quickley continued his play, while Randle continued to impact the game without scoring—making effective passes and continued to handle Oklahoma City bigs on the glass. Barrett had a brief stretch where he had a spot-up three, a finish in the lane off a hand-off, and then a finish at the rim for a three-point play. Everything looked beautiful.

Inject this into my veins pic.twitter.com/hpWjmtSrB0

Despite taking a considerable lead heading into the fourth quarter, the Knicks had to fight off a hungry Thunder team. Without two of their top players, Oklahoma City continued to play hard, resulting in easy looks at the basket. Moses Brown used his size to make things tough on the glass, resulted in some second chance looks while the Thunder received some surprising minutes from Ty Jerome as a creator and overall offensive orchestrator.

But the fourth quarter belonged to Randle, who solidified his triple-double with a few excellent feeds to Barrett in the middle of the floor. Then, as OKC began to build momentum, Randle knocked down a nice three-ball to calm things down. In the end, the Knicks were able to keep a Thunder team that started hot and kept rotating in hungry young players who made things enjoyable at bay.

Overall, this was a fun game! Let’s move to the game notes.

All smiles for RJ as he notches his first 30 point game 😁 pic.twitter.com/sWy1QRK46t

The Knicks travel back to New York but head down to the Barclays Center to face Kevin Durant, Kyrie Irving, and the rival Brooklyn Nets (25-13) on Monday, March 15th. Tip-off is scheduled for 8:00 p.m ET on ESPN.