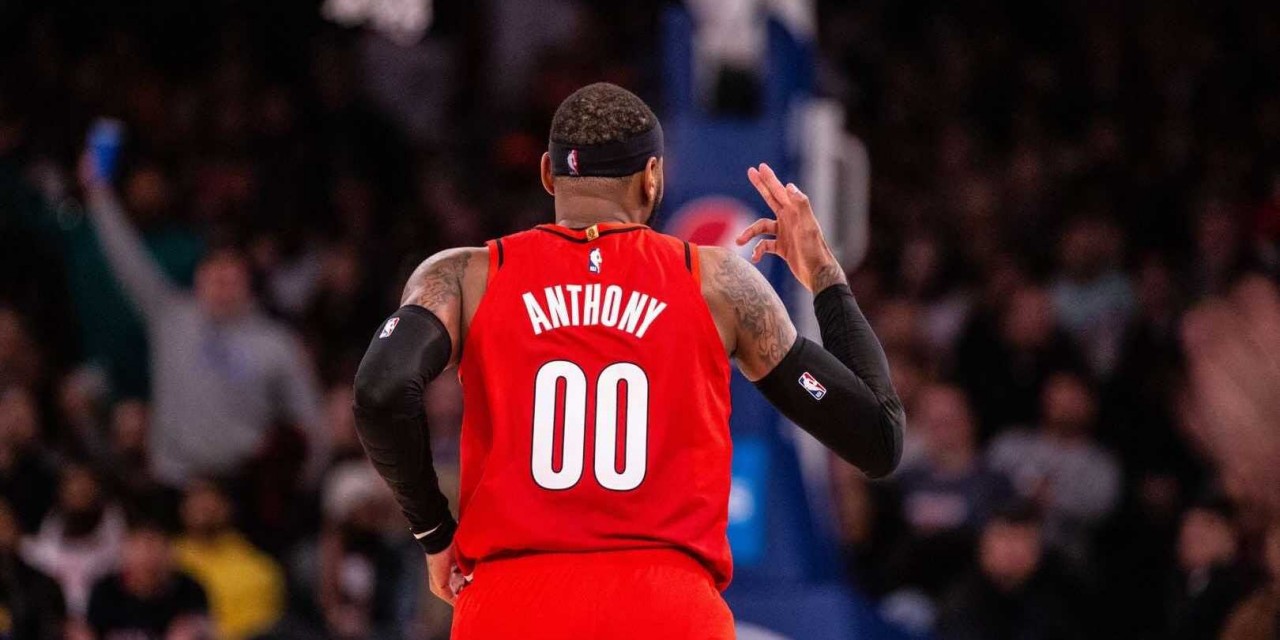 Carmelo Anthony had a vintage performance as a visitor against the Knicks on Thursday, although New York came away with the victory.

NEW YORK — For a night, all—and I mean all—was well in The Mecca of Basketball.

The Knicks just won their third game in a row, improving to 6-6 under Mike Miller and 6-4 in their last 10. They’re five games out of the playoffs with 48 games left to play. Julius Randle was a man reborn with Miller’s stewardship. Mitchell Robinson went a perfect 11-of-11 from the field, the first player since 1988 to do so. Reggie Bullock returned from a cervical disc injury to score 11 points off the bench, sparking the team with his outside shooting. The Knicks blew out the Portland Trail Blazers.

The former face of the Knickerbockers franchise returned home to a playground that he called his own from 2011–17. Sure, the franchise didn’t accomplish what they hoped to while ‘Melo was in orange and blue, but you never would’ve been able to tell it from the way the MSG crowd welcomed back the boy from Red Hook into their arms with a booming ovation when he was announced as a starter.

Polite round of applause for Carmelo Anthony when announced as a starter for Portland in his MSG return. pic.twitter.com/ddcidbkX2f

It was a vintage ‘Melo performance, much to the delight of the crowd. Every time Anthony called for an iso or went to work in the post, you could hear the crowd buzzing. Anthony finished with 26 points on an efficient 11-of-17 from the field and 3-for-5 from deep to go along with seven rebounds. As the final seconds ticked off the clock, chants of “WE WANT MEL-O” broke out from the Garden faithful, which is as good a feel-good moment as we get around here.

It wasn’t too long ago when things ended sourly for Anthony and the Knicks. There was no bad blood of note, aside from beef with Phil Jackson, but the face of the franchise was transitioning to Kristaps Porzingis. Fans welcomed the change; it felt time to move on, but there was always divisiveness among fans about how to assess Anthony’s time with the team. Some felt he was overrated, a ball-stopping team cancer. Others—which feels like the majority of fans—appreciated the contributions of a star who chose to come to New York and stay, even when things were tough, to try and win here.

On Wednesday night, the MSG crowd made sure he knew it.

“The love was definitely felt tonight.”

No love lost between @carmeloanthony and his former team ?❤️ pic.twitter.com/4rjOXJmXEI

The crowd was truly able to enjoy this one, with the Knicks continuing their strong play under Miller. Though Damian Lillard had a career-worst game, the Knicks responded every time Portland made a run to close the gap in the second and third quarters.

In the end, Mitchell Robinson tormented the Blazers on both sides of the ball, altering shots in the paint or simply rolling downhill into it for an easy alley-oop. Hassan Whiteside, the NBA’s leading shot-blocker, had no answers for the Knicks’ young two-way terror. Robinson threw down so many lobs even the second-year center was surprised how he got to a few.

After the game when asked if he was surprised he was able to catch the first one, a one-handed catch off a lob from Julius Randle, Robinson said, “Yeah. I didn’t know what was gonna happen. I was like, ‘why not?’, you know?”

Frank Ntilikina had a quintessential Frankie game, with nine points, 10 assists, three rebounds, two blocks, and a steal. His defensive presence was, once again, crucial. This is the Ntilikina the Knicks need nightly. Nobody will care if you don’t score much, as long as you score a little and contribute everywhere else.

Julius Randle continued to look like a star under Miller, posting 22 points, 13 rebounds, three assists, one steal, and a block. After the game when asked what adjustments the team has done to try and get Randle going, Miller had only to say that credit goes to the player when they play well. Miller did seem to indicate that Randle is picking his spots better, at least. “He plays with such force offensively, and as he’s doing that, he’s balancing where to use his skill as well, you see some of those where he spins off and makes those tough shots, he’s been so versatile with how he’s played.”

It was a euphoric night at the Garden, the type of night we don’t get often or consistently around here.

For just one night, all was well.