What Carmelo Anthony’s Expanded Destination List Means to the Knicks 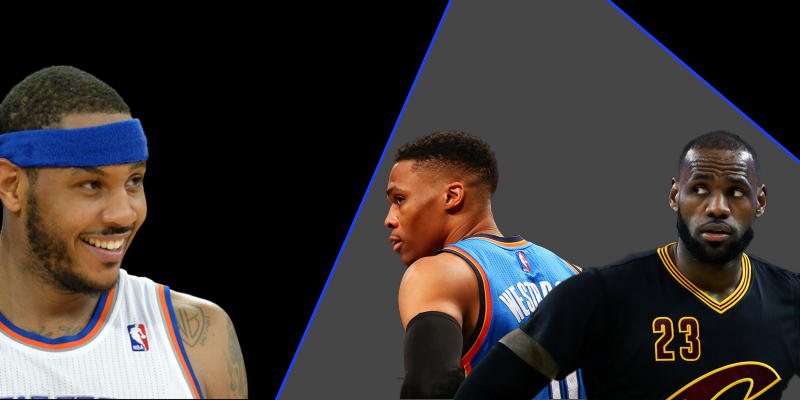 Carmelo Anthony has added Cleveland and Oklahoma City to his list of acceptable trade destinations.

Scott Perry likes things clean and neat. So it’s a bit of a surprise that he hasn’t cleaned up one of the messes he inherited from the previous regime.

Carmelo Anthony is still a New York Knick. Mr. Perry made that clear in speaking to the media early on Friday, two days before Media Day. But it didn’t take long for the narrative to change when Adrian Wojnarowski dropped a Woj Bomb several hours later.

Story filed to ESPN: Carmelo Anthony has expanded the list of teams with which he'd accept a trade — including the Cleveland Cavaliers.

What did we learn from this news?

Would Cleveland want to trade for Melo?

Yes. It is no coincidence that ‘Melo expanded his trade list to include teams with friends from the infamous banana boat. LeBron James’ days in Cleveland might be short, but as long as he’s still playing in his hometown, it behooves ownership to make some kind of gesture to keep him. Carmelo Anthony is a grand gesture, and while he comes at an expensive $54 million cost, he is a shiny new present for LeBron, with short-term cap implications to the Cavs, especially if they were able to unload a long-term contract as part of the trade. Given the questionable health of Isaiah Thomas, after trading Kyrie Irving, adding Carmelo would boost the Cavs’ chances of competing for second-place to the Warriors.

A reciprocal question to why Cleveland would want to trade for Melo is why did ‘Melo wait so long to include Cleveland on his trade list?

It’s a game of poker. Both the Knicks and ‘Melo are holding 2s and 7s, each thinking they can bluff the other side into a winning hand. The Knicks are limited in the type of return they can receive for their superstar scorer because Anthony has a no-trade clause. ‘Melo is stuck playing out his career for an organization that seemingly dislikes him (Phil might be gone, but look to the top of the food chain), unless he accepts a trade to what would likely be a less than ideal location.

Presumably, Anthony let the Knicks talk to the Rockets throughout the summer, hoping the genius of Houston GM Daryl Morey could make a trade work. Once it got close to training camp, he was forced to add a few teams or else risk not being traded at all. The Knicks probably knew this game plan all along, calling Carmelo’s bluff, and now with more teams to work with, they have a better opportunity to gain desirable assets in a potential trade. In other words, ‘Melo expanded his trade list when he had no choice, since it seems, by now, he is ready to move on from New York, while the Knicks gained leverage by refusing to fold their cards early. Advantage: Scott Perry/Steve Mills.

What would a potential deal with Cleveland look like?

Since the Cavs are operating over the salary cap as a tax-paying team, they are only allowed to receive 125 percent (+$100,000) of any outgoing salary they relinquish in a trade. Put simply, the Cavs would need to send out at least $21.1 million in salary to make a trade work for Carmelo Anthony, who is owed $26.2 million in 2017–18. Anthony would also need to waive his 15 percent trade kicker to help ease the salary-matching burden.

$21.1M in contracts being sent out would be needed to get a Carmelo Anthony trade done. Factors in waiving his trade kicker.

Looking over the Cavs roster, there are several iterations of deals that could make the salaries work, but the options become more limited when you consider what the Knicks would want to acquire in relation to what Cleveland would be willing to exchange.

It’s no secret that Cavaliers-owner Dan Gilbert would like to save money, as every owner does. Playing in a market like Cleveland and paying out huge luxury tax payments is easier to swallow when LeBron James is on your roster, but if the King bolts for a new city next summer, then the Cavs will quickly tighten their budget. That makes the long-term contracts of Tristan Thompson, J.R. Smith, and Kyle Korver all very available. Iman Shumpert has a player option after next season that he will most definitely exercise, making him another player that management would be happy to unload. A lot of ex-Knicks, huh?

Kevin Love has a big contract, but I am leaving him out of this discussion, for now. I think if the Cavs would like to move him, they would do so in a separate deal to acquire young assets or draft picks, not for a 33-year-old stop-gap sidekick for LeBron.

Knowing the Cavs would need to reach $21.1 million in outgoing contracts to trade for ‘Melo and understanding their long-term financial position, I believe that any trade for Anthony would include one of Thompson, Smith, or Korver. The Knicks might not like any of those players, but if they want to ask for pieces they do like — for instance, Jae Crowder, or a future draft pick (don’t even think about the Nets pick) — they have no choice but to absorb a long-term contract.

If the Knicks are thinking about streatching Joakim Noah’s bloated contract, they could see Tristan Thompson as a young replacement whose timeline fits well with the young core that Scott Perry made so much press talking about this past week. By taking on over $52 million in salary obligations for Thompson, the Knicks could then request the darling contract of Jae Crowder, a much needed bargain wing player, and just enough salary ($6.8 million in 2017–18) to make the contracts work in a trade for ‘Melo. The Knicks would need to be patient to make a deal like this happen since the Cavs must wait two months (October 22) before trading Crowder after acquiring him in the Kyrie deal.

What about that other team ‘Melo expanded his list to include?

After we all had our Knicks-Cavs trade ideas ready, Ian Begley revealed the mystery third team that ‘Melo has included on his acceptable trade list.

Knicks have been informed that Oklahoma City is one of the other teams Carmelo Anthony has included on his list, team sources told ESPN

Another team the Knicks can technically work with and another team with cap issues and limited assets available to trade. In fact, if you consider the outgoing salary needs (like Cleveland, OKC would need to trade at least $21.1 million), and you rule out Russell Westbrook, Steven Adams, and Paul George, one big contract remains:

Without including a third team, it would be nearly impossible for the Knicks to structure a deal with Sam Presti’s Thunder unless they would be willing to take back Enes Kanter’s $17.9 million salary next season (he also has a player option for $18.6 million in 2018–19). Any other deal would require Presti to cobble together his entire bench of role players to try to reach the needed $21.1 million trade threshold.

Portlandia, Dame D.O.L.L.A. (who dropped a new single with Lil’ Wayne), coffee shops. Oh yeah, they play basketball in Portland, too. The Blazers also have a lot of desirable assets. It feels like ‘Melo is playing the wall at the club, eyes set on someone in particular, but knowing he’s got one dance waiting for him.

What makes Portland attractive to the Knicks is twofold.

Like Cleveland and Oklahoma City, the Blazers are over the cap, but unlike Cleveland and Oklahoma City, they are a non-taxpaying team, thanks to a recent trade of Allen Crabbe to the Nets. By dipping below the $119.2 million tax threshold, and just barely (they sit at $118.6 million), the Blazers save themselves over $50 million in tax and salary next year. Obviously, ownership would like to keep their tax burden down, so a potential trade for Melo would likely require a near dollar-for-dollar match in salary. This means the Knicks taking back more salary than they might in a trade with Cleveland or OKC, but more reason why Scott Perry should have leverage in demanding quality assets in return.

If trades centered around Tristan Thompson or Enes Kanter don’t get you excited, what if I told you the Knicks could add Maurice Harkless, Evan Turner, and maybe even a draft pick from Portland? Evan Turner would be the price of doing business, but Maurice Harkless represents the type of young, versatile, defensive-minded wing player the Knicks desire. Negotiate a draft pick to take on two long-term contracts (Turner and Harkless are both signed through 2020) and force Portland to pay a premium to make the deal actually happen, and the Knicks could wind up in great position.

But as of September 23, 2017, two days before training camp, and given the expanded list of teams where ‘Melo would accept a trade, adding in Portland, too, Knicks fans should focus on two names: Jae Crowder and Maurice Harkless. Get back one of those players, avoid Ryan Anderson and Enes Kanter, and everything else is gravy.

Find The Knicks Wall on Facebook and Twitter for more news and coverage of the team, and listen to the TKW Podcast on iTunes and SoundCloud!