10 Years Later, the Carmelo Anthony Trade Is a Misunderstood Win 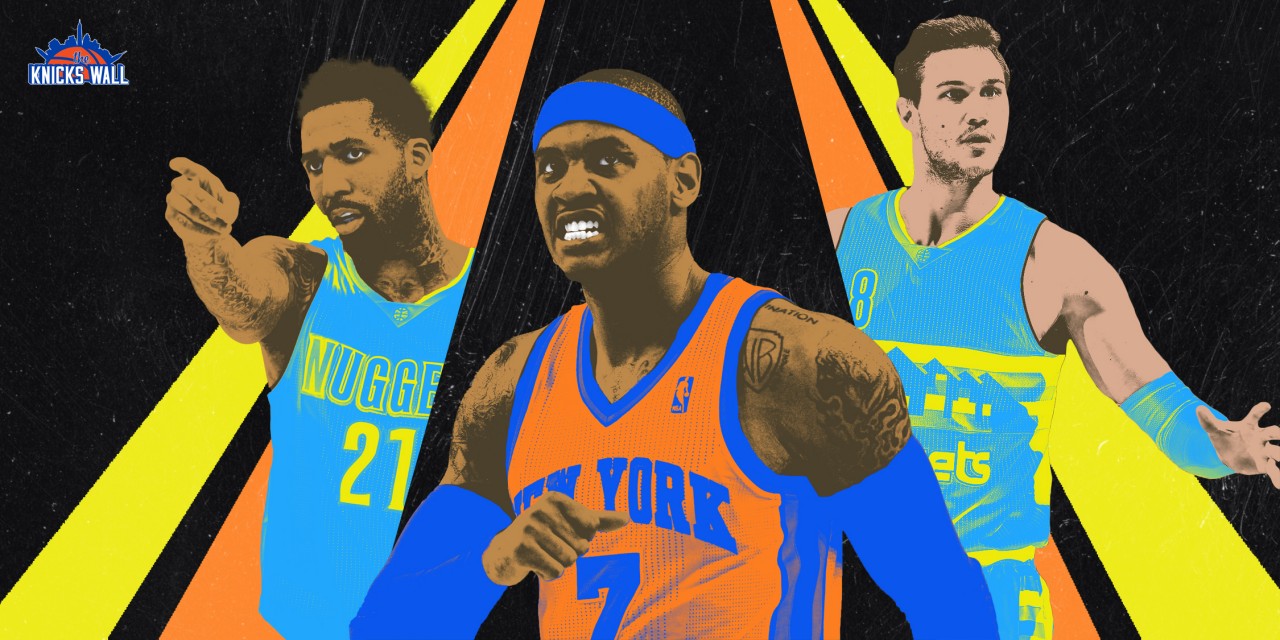 The Carmelo Anthony trade represented a flashpoint for the Knicks. Since then, teams, among New York, have wrongfully cited the deal when justifying not trading for a top-10 player.

The Carmelo Anthony trade turned 10 years old last weekend. That would be the initial Carmelo Anthony trade, not to be confused with the trade that may be renamed “the Mitchell Robinson trade” that sent Anthony to Oklahoma City. Anthony’s move from Denver to New York was a seminal moment in Knick history.

It has reframed the prism in which fans view blockbuster trades and, to some extent, framed the way in which the front office approached its roster construction following the Anthony era. With Bradley Beal rumors starting to swirl and a renewed push for a star player anticipated, now is the opportune time to remember that the Carmelo Anthony trade was indeed good.

One massive misconception is that the Anthony blockbuster was a bad deal for the Knicks. To put this bluntly, that is bullshit.


The Knicks traded a starting-caliber player and role players for a top-10 player at the peak of his powers. Anthony’s presence immediately restored buzz to the NBA’s sleeping giant and could have put New York back among the upper echelon of the Eastern Conference if they—they, being the front office—followed through on building around their newly acquired star.

It is this qualifier that has resulted in a large minority of fans pettifogging the true problem with the Anthony trade: its follow-through. On its face the Anthony deal was, at worst, paying market price for a top-10 player.

The core of the deal involved Danilo Gallinari, Wilson Chandler, Raymond Felton, Timofey Mozgov, a 2014 first-round pick, and a 2016 pick swap going to Denver for Anthony and Chauncey Billups. Other moving parts involved the Minnesota Timberwolves and Random Knick legends Anthony Randolph and Anthony Carter, but those are all minor. In terms of the meat of the deal, the Knicks did not get the short end of the stick.

At the time, Gallinari, Felton, and Chandler were starters hitting their stride along Amar’e Stoudemire, but all paled in comparison to Anthony. Not to mention a still-useful Billups, who could theoretically offset the loss of Felton. Gallinari would be the only one of that core to have any staying power, playing integral roles on the Nuggets, Los Angeles Clippers, Oklahoma City Thunder, and Atlanta Hawks. The rest? Duds.

Wilson Chandler would go on to play 422 more games in his career, averaging 11.7 points per game shooting 43.7% from the field (34.9% from deep). Felton would find his way back to New York two seasons later for his last serviceable year as a pro—he would go on to appear in 369 games, averaging 7.4 points per game. Mozgov would famously fill in at starting center for the Cleveland Cavaliers during their 2015 Finals run before fizzling out of the league by 2018.

That doesn’t seem like a lot to give up for someone who would go on to tally 10,186 points over seven seasons and give the franchise its only meaningful playoff run since 2000.

Why is the trade not universally loved?

A loaded question, but an easy one to dissect and answer. The answer, in part, is Jamal Murray. The 2014 draft pick surrendered in the deal ended up being Dario Saric, a serviceable stretch four in the modern NBA, but not someone you curse the basketball gods for stealing from you. Murray ended up being the big prize of the deal for the Nuggets, and the culmination of every bad decision New York made after they traded for Anthony.

The first order of business should have been finding an exit strategy from the bloated guaranteed contract given to Stoudemire in 2010. By no fault of Stoudemire, his knees and questionable fit with Anthony from a spacing perspective made him expendable. In a stroke of luck, the Knicks were given the golden opportunity to do just that with the Amnesty Clause, also known as the Allan Houston rule, which allows teams to clear a player off their books without taking a cap hit.

The clause was introduced in 2005, and ironically enough the Knicks used it to clear Jerome Williams off their books that year. In 2011 the Knicks could have done the same with Stoudemire and freed themselves to build around Anthony. Part of that rebuild could have featured Chris Paul, whose famous wedding toast and expiring contract made the possibility of Paul and Anthony a very real possibility.

Instead, the Knicks made one of the more moronic string of moves a franchise has made since David Kahn passed on Stephen Curry twice in the 2009 draft. The Knicks picked up Chauncey Billups’ one-year $14.2 million player option on April 27th, 2011; a few months later, on December 10th, 2011, the Knicks chose to amnesty Billups to clear cap space for Tyson Chandler. Billups’ replacement would be the corpse of Mike Bibby and the fumes of Baron Davis.

Chandler was a smart signing and one that could have been amplified even further if Paul or another point guard rounded out the Big 3. Unfortunately, the presence of Stoudemire made Chandler’s fit less than ideal, even with Chandler giving the Knicks their best interior presence since Marcus Camby.

The more prudent decision would have been to clear Stoudemire’s $20 million annual hit, ride out Billups’ expiring contract, and hope Paul would hit the open market in the summer of 2012.

Only a fool talks of hypotheticals in absolutes, but even if it was wishful thinking that the New Orleans Hornets wouldn’t trade Paul (they did) and that Paul would not sign an extension of any kind (he did), it was a much better strategy to build the roster with Anthony as the offensive anchor and Chandler as the defensive counterpart. Their folly keeping Stoudemire over Billups only crowded the frontcourt and cap space, limiting further improvements.

Despite the ridiculous decision to amnesty Billups over Stoudemire, the Knicks would enjoy a brief window of success beginning in February of 2012 with Linsanity, and of course the golden year of 2012–13’s 54-win season. Many argue the team’s decision to not match Jeremy Lin’s offer sheet in 2012 free agency was a bad decision, but this was actually a good call. Instead of signing Lin, the Knicks signed a slew of veteran players including Jason Kidd, Marcus Camby, Pablo Prigioni, brought back Felton, and re-signed bench mob staples J.R. Smith and Steve Novak. Chris Smith was also signed, but we don’t talk about that around here.

The good times ended abruptly. The Knicks were eliminated by the Indiana Pacers in the conference semifinals in 2013 and have failed to make the playoffs since. On July 10th, 2013, the team made one of the worst deals in recent memory when they traded for Andrea Bargnani from the Toronto Raptors.

There has been a lot of stupidity over the years involving the Knicks, but the Bargnani trade is in a class of its own. The Knicks received Bargnani in exchange for a 2016 first-round pick, Steve Novak, Quentin Richardson, Marcus Camby, and a pair of second-round picks (2014 and 2017).

To say the trade was a disaster would be an understatement. Watching the trade come to fruition was like watching the Titanic approach the iceberg. Even in the moment everyone knew this would go poorly, and go poorly it did. Bargnani played 71 forgettable games, at least giving us one of the greatest lowlights of all time before he disappeared.

This remarkable gaffe was compounded by James Dolan a few months later when the owner killed a deal that would have netted the Knicks Kyle Lowry in exchange for Iman Shumpert, Metta World Peace, and a future first-round pick. Dolan was weary after the reaction to the ‘Melo trade, yet somehow had no problem sending a first out for the inferior Bargnani, essentially putting the final nail in the coffin for Anthony’s title window with New York.

“That deal was done,” Lowry told USA TODAY Sports in 2016. The deal would jumpstart the Raptors’ road to their first championship. Lowry and the Raptors have not missed the playoffs since the nixed deal, Lowry is an NBA champion, and the Knicks have been frequent visitors to the draft lottery.

Following the 2013–14 season, Anthony opted out of his deal, Chandler and Felton would be traded to Dallas, Stoudemire would be bought out in 2015, Phil Jackson would be brought in, and you know how the rest goes.

One move that Anthony can take fault for is his decision to re-sign in 2014. The Knicks were clearly headed for a rebuild again, while Tom Thibodeau and the Chicago Bulls offered a legitimate chance to challenge LeBron James. It is hard to fault Anthony for taking the extra money, but also hard to have much sympathy for the mess that ensued until he was dealt to Oklahoma City.

It is important to refresh our memory on the deal itself and most importantly all that followed. The team did everything wrong it could possibly do after acquiring a top-10 player in the prime of his career. That snowballed into the owner killing a good trade, in fear of another visceral reaction from the public.

These missteps have led some Knick fans to become squeamish about superstar trades. If the goal is to ultimately win a championship or even to enter the title discussion, your team is going to need a star player to entice other star players eventually. Drafting and shrewd trades is the utopian road to glory; acquiring as many elite players is the more practical approach.

Beal is the latest superstar to become available, and just like in 2011, the Knicks are in a great position to make a play. The war chest of assets Steve Mills and Scott Perry stacked up over the past few years is equipped enough to meet the Washington Wizards’ asking price of three first-round picks, two pick swaps, and a young player.

The price is actually more palatable than what the Nuggets asked for. Thanks to the Kristaps Porzingis trade—another example of why you must wait before declaring a winner of the trade—the Knicks can get away with including one of their own first-round picks.

Which young player the Wizards would want is the key to all of this. The current core of young talent is much better than the 2011 group. Julius Randle is now an All-Star player. Mitchell Robinson and R.J. Barrett are already serviceable starters and, in Barrett’s case, he is not even old enough to legally drink. Immanuel Quickley and Obi Toppin are exciting rookies who can score.

Parting with any of these players would be tough, but those who climb to the top must make sacrifices. The Los Angeles Lakers sold essentially their full core of promising players for Anthony Davis and saw immediate returns. Beal would have the same seismic effect on the Knicks, but he opens the door to more exciting moves down the road.

Beal and Randle give the Knicks a duo good enough to propel them from mediocrity with room to further upgrade the roster. Anthony gave the Knicks opportunity 10 years ago, but they blew it.


Under a smarter regime, a Beal deal could provide a similar effect: it will be a lot easier to get a meeting with the Kawhi Leonards of the world when you can pitch Beal, Randle, and whatever else your heart desires.

When a deal is made for a star player, the key is not to focus on the trade itself. Focus on the follow-through. That is what truly mattered 10 years ago, and what matters now.