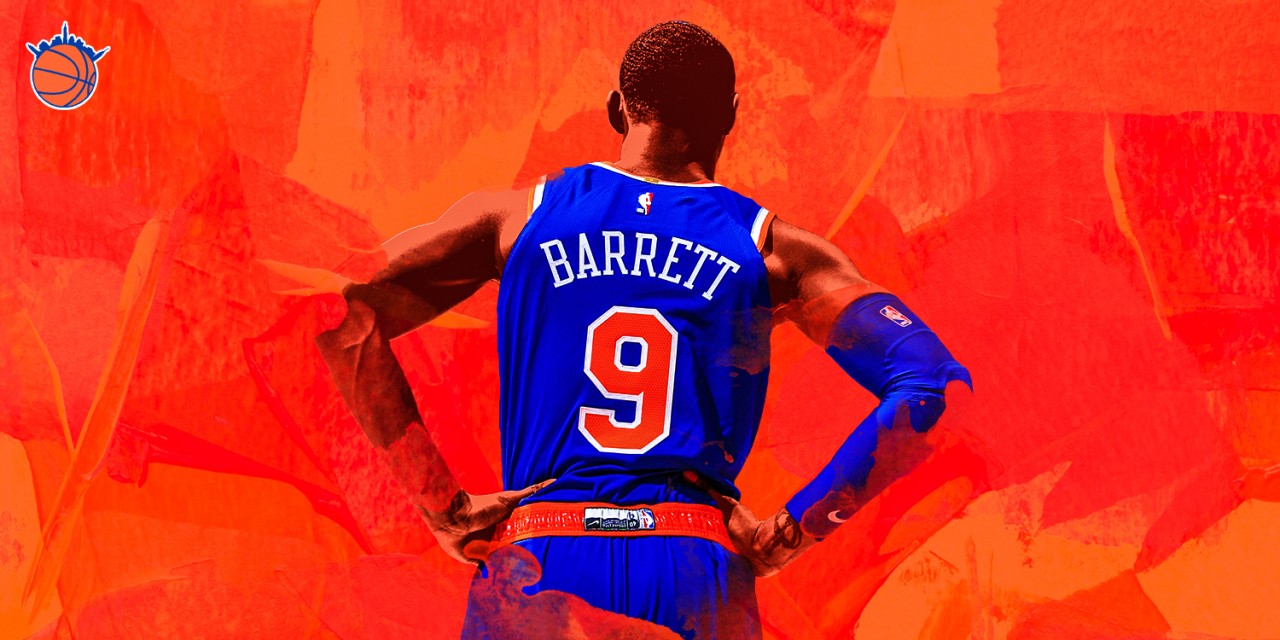 Impressive Knicks rookie guard RJ Barrett can still orchestrate the team’s offense without being the only ball handler in the backcourt.

R.J. Barrett is off to a fast start for the New York Knicks. Despite the team’s unremarkable record, 1-7, the third overall pick in the 2019 NBA Draft is averaging 17.9 points, 6.1 rebounds, and 3.9 assists per game while playing a near-league-high 36.8 minutes a night.

A starter from day one, Barrett’s first official regular-season game actually pitted him as the nominal lead guard in second-year head coach David Fizdale’s offense, with combo guard and former undrafted free agent Allonzo Trier joining him in the backcourt. After Elfrid Payton, a free agent pick-up last summer, quickly demonstrated himself as a stabilizing force in New York’s lineup, Barrett moved over back to his natural position, the shooting guard role. Then Payton went down with a hamstring injury and Fizdale first tried to move Barrett back to the 1 before pairing the first-year guard with Frank Ntilikina, the polarizing Frenchman.

Last week, The Knicks Wall staff writer Zach Locascio penned an article detailing the positives in Barrett’s turn as a lead guard, specifically giving the Knicks a boost with a real offensive threat at point guard—something unheard of for the ‘Bockers since…possibly Stephon Marbury?

Zach is correct: R.J. Barrett does give the Knicks an improvement as a scorer at point guard; however, for everything that was truthfully stated about the rookie’s contributions so far, it’s responsible to examine how the dual shooting-guard lineup for Fizdale’s team also harms Barrett’s own development and maximizing the Knicks.

Leveraging Barrett as a slasher

One of the immediate impacts of Barrett’s role as a point guard in Fizdale’s offense is the overwhelming presence of the team’s vets—mainly forwards Julius Randle and Marcus Morris, two competent offensive threats who prefer operating, at least from what we’ve seen, in an isolation system. The Knicks are one of the worst teams at the moment in assists per game and turn the ball over an egregious number of times a contest. Part of the reason the Knicks can’t help themselves from fumbling the rock is the high number of new players sharing the court early into the young season, along with lack of communication on that end.

Those issues are amplified when Fizdale throws Barrett at the 1 due to limiting the Duke product in initiating any offensive halfcourt set. Far too often the 6-7 Canadian guard would commence a possession by dumping the ball to a waiting Randle or Morris in the post. Barrett’s clear, number one skill right now—and possibly forever in his professional career—is dominating opponents by driving to the basket and being a downhill threat. We keep saying Barrett already has the “NBA body” and physique; by pushing him as a lead guard (alongside this group of teammates), Barrett’s role on offense is severely constrained to setting up his teammates, who in turn have yet to thorough screen for him (on or off ball) and make the rookie a slashing hazard for opposing defenses.

Here are several clips I stitched together to visually emphasize a Barrett-led offense without another ball-handling guard:

New York has an 84.6 Offensive Rating in 13 minutes, per NBA Stats, with those five players sharing the court. The Knicks’ best OffRtg in double-digit minutes so far is a Payton-Barrett backcourt with the starting frontcourt minus Robinson plus Portis (132.2 in 27 minutes), which can be traced back to Portis’ mind-melting performance against his former team, the Chicago Bulls.

One reason Duke last season in the NCAA was very flawed was the lack of spacing and perimeter shooting threats. When Barrett is made the point guard, he has to be one of those shooting threats (he has started the season shooting nearly 40% from deep; it won’t last) and in the spare time he can drive to the rim. He again has no abundant and reliable three-point threat other than Ellington, if he’s playing with him, and/or Morris. This is déjà vu if you watched the Blue Devils last year.

Barrett has been visibly patient while running the pick-and-roll, and as ESPN’s Zach Lowe mentioned last week, his advanced numbers are “averaged,” but that can be directly affected by the Knicks’ poor outside shooting (bottom third in the league in made threes per game). R.J. cannot be the only primary playmaker in the backcourt, or else he’ll be chucking up well-defended floaters or regressing in his three-point shooting. His jumper is a work in progress, much noticeable from the free throw line, and the constant dumping to the post to Randle or sticking in the corner for his teammates’ iso possessions have and will continue to make Barrett’s shot stick out like a sore thumb. He’ll have to hoist up threes on his own to salvage a possession.

Instead, Barrett needs another playmaker and natural point guard in the backcourt with him (or move him to the 3! But that’s another layer removed from the importance here). Wherever you stand on the Great Ntilikina Debate, or if you prefer either Payton or Dennis Smith Jr., it’s undeniable that the third-year French guard can at minimum be a good defender and initiate the offense. The latter point being key in understanding how Barrett can self-improve and learn when to take his shots and where on the floor is he most comfortable exploiting mismatches.

For example, here’s Barrett against the Celtics in Boston running the pick-and-roll with Robinson and finding Ntilikina for a corner three.

A similar play to Randle passing to Barrett in the corner, who drives, but this time it’s Ntilikina making a quicker decision and sharing the ball right after passing (led to free throws for the rookie).

And if you’re not leal to the French Prince, and Payton is more your style, again, the sixth-year vet and former Scott Perry lottery pick in Orlando has some of the team’s best offensive efficiencies in lineups. In other words, Barrett needs another guard in the backcourt with him instead of an only catch-and-shoot threat Ellington, who doesn’t set up the offense or is adept in the pick-and-roll like Barrett or another point guard, or Trier, who’s trying to break the “Iso” nickname but has since been glued to the bench.

To wrap things up with a retrospective, I was initially very hesitant with even the idea of Barrett playing the 3. I thought R.J. would succeed by using his physique and driving ability as the shooting guard instead of having to deal with taller and stronger forwards. I’ve since come around on this idea because of Barrett’s crafty moves for layups and the underlying need for perimeter shooting on the Knicks, but it should definitely be matchup-based for Barrett as a small forward.

However, Barrett will not prosper personally, and the team is not maximizing its well-performing rookie, if he has to be the only playmaking guard in a lineup. The early chemistry with Ntilikina is encouraging, and Barrett can exploit offensive opportunities by slashing to the rim, operating in the PnR, or setting up teammates. Though, that last point turns to ash when Barrett doesn’t get help from his teammates.

»READ: Could RJ Barrett be the answer at point guard?

»READ: Playing RJ Barrett in garbage time is not helping him succeed