The Case For Julius Randle as a Secondary Option 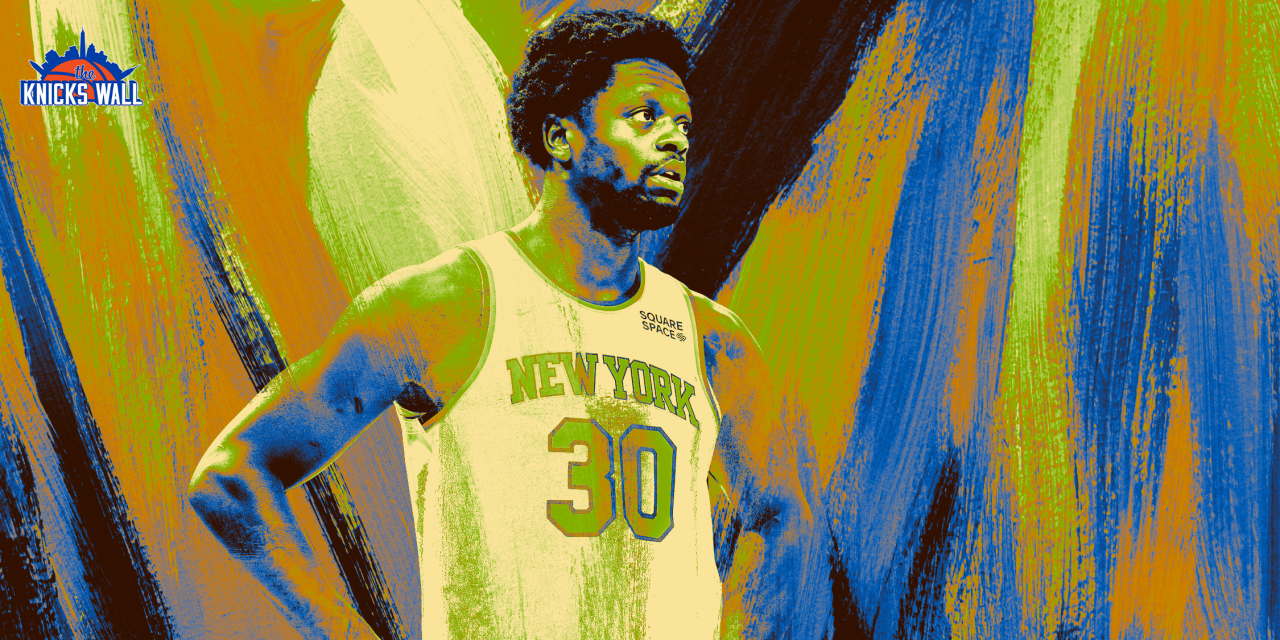 Julius Randle’s struggles this season were well-documented. Could a shifting of offensive responsibilities help him regain some dominance?

This season of New York Knicks basketball revealed quite a lot about roles on the squad and who could, or more importantly, could not step up as the true playmaker within a starting lineup that lacked a point guard. If there was one thing we learned for sure, it’s that the Knicks would be better served if their lone All-Star entering the season, Julius Randle, spent more time working on his ability to be a catch-and-shoot player, and less time seeking to handle the rock to begin, and often end, possessions.

Were his struggles because of the lack of “true” point guard play? Or did he simply feel more comfortable in a “1A” role, knowing that eventually his teammates would find their stroke and be able to capitalize on his potential dishing prowess? Regardless of these questions, Randle took a lot of blame throughout the year for trying to get his team going on offense, which usually resulted in some poor results for him and the rest of the team.

The idea of Randle allowing the younger, faster Knicks on the team, namely RJ Barrett, to take control of ball handling while he becomes a devastating attacker against shifting defenses is attractive. It would take an adjustment from both him and a hopefully improved backcourt, but it could prove to be successful as the Knicks try to get Randle comfortable once again as the high-scoring engine that was sorely missed.

Looking at the numbers

Randle tried his best to get his teammates the ball this season, but unfortunately, their lack of scoring prowess was his downfall when it came to his assist numbers. According to NBA.com, Randle passed most often to Evan Fournier, who led the Knicks in three-pointers made this season but lacked touch around the rim, and Alec Burks, who averaged just over 40% from three-point range but only scored 11.7 points per game.

When passing out to Fournier, Randle’s favorite target, the Frenchman averaged 42.6% from the field. For Burks, this number sank down to 29.2%. And for his third favorite target in Walker, he ended up falling right in the middle of the pack at averaging 38.1% from the field. Looking at the numbers alone, you’d think that Randle’s ability to dish out to players like Fournier and Burks meant that they had a larger impact on the Knicks’ offense.

But, you would have had to watch the games this season to know that those passes, while often timely and smart from Randle, often meant that players with stronger scoring ability at the rim like Barrett or Mitchell Robinson missed their chance to help speed things up while running down the court.

Robinson averaged 62.5% from the field off passes from Randle, but they came very rarely as pick-and-roll action was typically reserved for Robinson and a point guard on the floor like Quickley. Randle only passed out to Robinson 3.3% of the time, even though Robinson was a decent paint scorer after getting healthier as the season progressed. Randle was only really a pick-and-roll man in his time with the New Orleans Pelicans according to NBA.com and has no record of being the primary ball-handler on these types of plays. This goes to show that Randle did not have much flexibility in terms of what he could really generate as the primary ball-handler for New York, even with a rim threat like Robinson who averaged 66.7% of shots from the field off passes from Quickley, and an even better percentage made off passes from the shooting guard Burks.

With Fournier and Burks being almost exclusively catch-and-shoot players, and Walker sitting out for most of the year, it would have been imperative for Randle to find other options to go to more consistently. Unfortunately, that wasn’t the case. So, what could have been if Randle was the 1B option behind another potential playmaker like Barrett?

Barrett and Randle can be seen as the two most important Knicks on the team right now. Both have extremely large potential to be catalysts behind a strong offense and an even stronger defense under the tutelage of Coach Tom Thibodeau. While Barrett continued to improve this season with both his three-point shooting and with his court vision, Randle definitely seemed uncomfortable in his role at times.

If given the opportunity, Barrett could be the facilitator over Randle and could do so effectively. Barrett passed to Randle at a higher frequency than any other teammate, and Randle hit those shots at a respectable clip of 35.8% from the field. This is in comparison to the 13.9% of passes to Barrett from Randle, even though Barrett hit those shots at a similar rate of 36.5% from the field.

The numbers are fairly equivalent between those two players, but when looking at who else Barrett liked to facilitate the offense through such as Immanuel Quickley, there is a greater chance of speeding up the offense overall considering how… quickly New York plays with Quickley in the backcourt. Though Randle shot 4.0% better from the field on pull-ups than on catch-and-shoot jumpers, even when they were going on, it was easy to feel the offense grinding to a halt. But, from ten feet away from the basket, he was very effective, averaging 55% of field goals made. Randle cutting off of Barrett or Quickley’s passing could greatly improve his impact on the Knicks’ offense and allow Randle to play with the space and timing that he seemed to lack this past season. It’s a style of play that Obi Toppin was able to thrive in while playing with Quickley and Barrett, and given Randle’s size and ability to back down defenders when he is in the paint, there’s no reason he shouldn’t be able to thrive as well.

RJ Barrett powered the @nyknicks to their highest scoring half of the season!

It will be up to the Knicks’ coaching staff entering the 2022–23 season to find tweaks that will benefit both Randle and other featured players on offense like Barrett, Fournier, and the rising Quickley. A better backcourt would make that adjustment easier, but we have yet to see any major moves that would indicate that being an impending reality. While we’ve seen that Randle can be a primary ball-handler and has the ability to help his teammates score, he would be better served attacking off another playmaker, not trying to play Point God for catch-and-shoot players in a starting lineup that needs to play faster and more decisively.