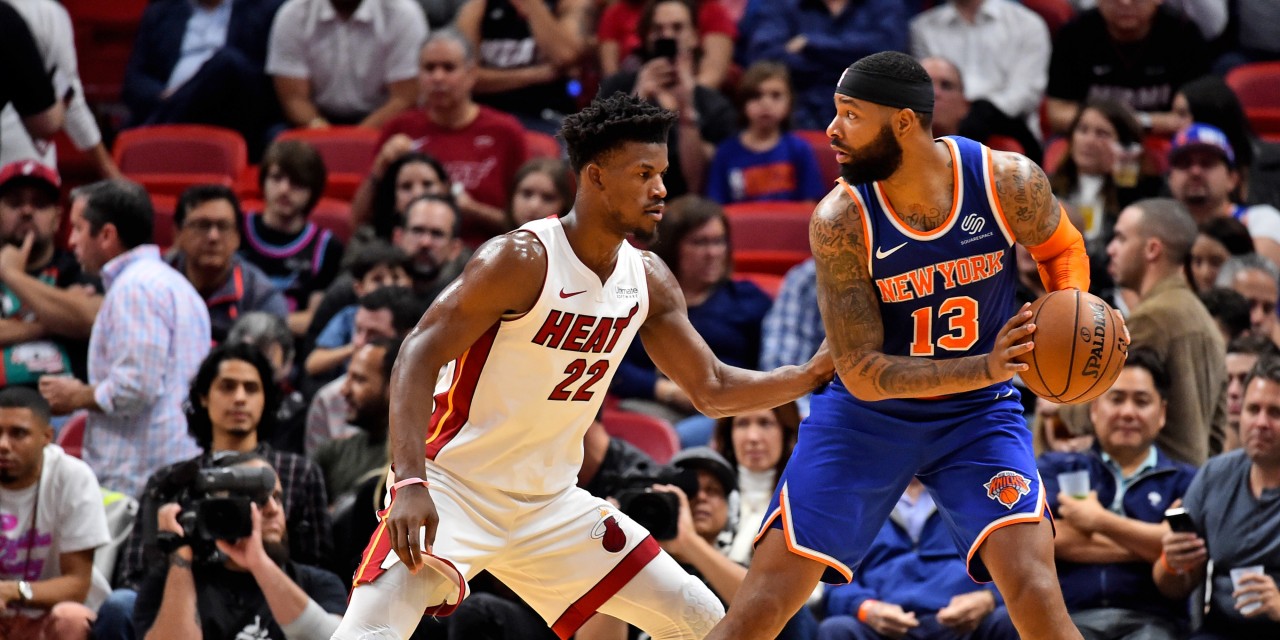 Marcus Morris is the Knicks’ best trade chip this deadline, but he also represents bona fide good outside shooting for a team that desperately needs it.

Everything about the New York Knicks’ season screams “sell” at the deadline. Between their abysmal record—they now stand at 15-36 after last night’s overtime win against the Cleveland Cavaliers—their mismatched roster, and the number of veterans on expiring, one-year contracts, the argument for staying put at the trade deadline is virtually nonexistent. Other than R.J. Barrett and Mitchell Robinson, there is no one on the Knicks roster who should be deemed untouchable.

Unfortunately,  the Knicks seemingly like to live every day like it’s opposite day. After all, they did prioritize size and toughness over three-point shooting in the offseason. And now they’re saying Marcus Morris—easily their most attractive trade chip as the deadline looms—is a candidate to re-sign after this year and they’re not interested in trading him for a late first-rounder. This seems preposterous—he’s taking away minutes from younger players like Kevin Knox and Damyean Dotson while the Knicks look to be heading to the lottery for the third straight year. In reality, though, Morris has been far and away the Knicks’ best player on the floor, as well as their unequivocal leader off of it. For a Knicks team looking to claw their way back to relevance, he might also be integral to their future, too.

Holding onto Marcus Morris: Not as Crazy as it Sounds

Morris is undoubtedly having the best season of his career, at least from a statistical standpoint. He’s averaging 19.6 points, 5.4 rebounds, and 1.4 assists on 44.2% shooting from the field and 43.9% from three, which is good for fifth in the league. Morris has been a reliable and consistent scorer and an above-average defender on a team that generally lacks any semblance of stability on a game-to-game basis. Not only has he been lights out from three on a team that can’t shoot from deep, but he’s been a great isolation scorer and clutch bucket-getter who can create their own shot when the shot clock is defending. For all intents and purposes, Morris has shown ‘Melo-in-his-prime-esque shot-making skills, only he’s a far more efficient shooter from three.

In fact, one could even argue he’s not only been the Knicks’ best scorer, but their best overall player since pre–Phil Jackson era ‘Melo.

But that’s not all. He’s really taken on the leadership role for this team. Maybe he saw everything Kyrie Irving did in Boston last year and decided to it would be shrewd to do everything the complete opposite. Between calling a players-only meeting after David Fizdale was fired, to having his teammates’ backs on the court, and holding teammates—and himself—accountable, Morris has shown the ability to lead the Knicks on and off of the court.

“He’s been a great veteran for these young guys,” Miller said after Morris’ impressive performance against the Cavaliers, where he scored 16 of the Knicks points in the fourth quarter and overtime.

Additionally, Morris’ skill set is one that can complement the Knicks’ developing players. As a versatile wing who can play both the three and stretch four (and maybe even a little small-ball five, for stretches), Morris has everything a modern player needs to be successful—positional versatility, ball handling, and shotmaking. The Knicks’ two best young players, R.J. Barrett and Robinson, aren’t plus shooters at this stage in their respective careers (Side note: It’s slightly infuriating that Robinson still won’t even look at the basket outside of the painted area). Marcus Morris can provide solid spot-up shooting and spacing for two players who make their living in the paint.

And while Morris’s isolation might seem like a detriment to a developing Knicks squad, it’s actually been a blessing in disguise. His ability to get off his own shot in the pinch-post and mid-range area has taken a lot of pressure off of their younger players, particularly Barrett. The third overall pick certainly has an NBA-ready body, but his shooting and shot creation still leave much to be desired.

Although Julius Randle is still just 25—and the only offseason acquisition signed past this year—it’s easy to make the argument Morris is actually the better fit going forward for the rebuilding Knicks. New York needs to show they’re on the right track to ever really be considered by marquee free agents, and the Knicks are clearly a better team when Morris is on the court. The Nets were able to steadily improve year by year in order to land Kevin Durant and Irving, and they did this largely in part by adding a stable group of veterans to their young core.

The Knicks might have whiffed in free agency on some of their own veteran signings, but that, undoubtedly, does not include Marcus Morris.