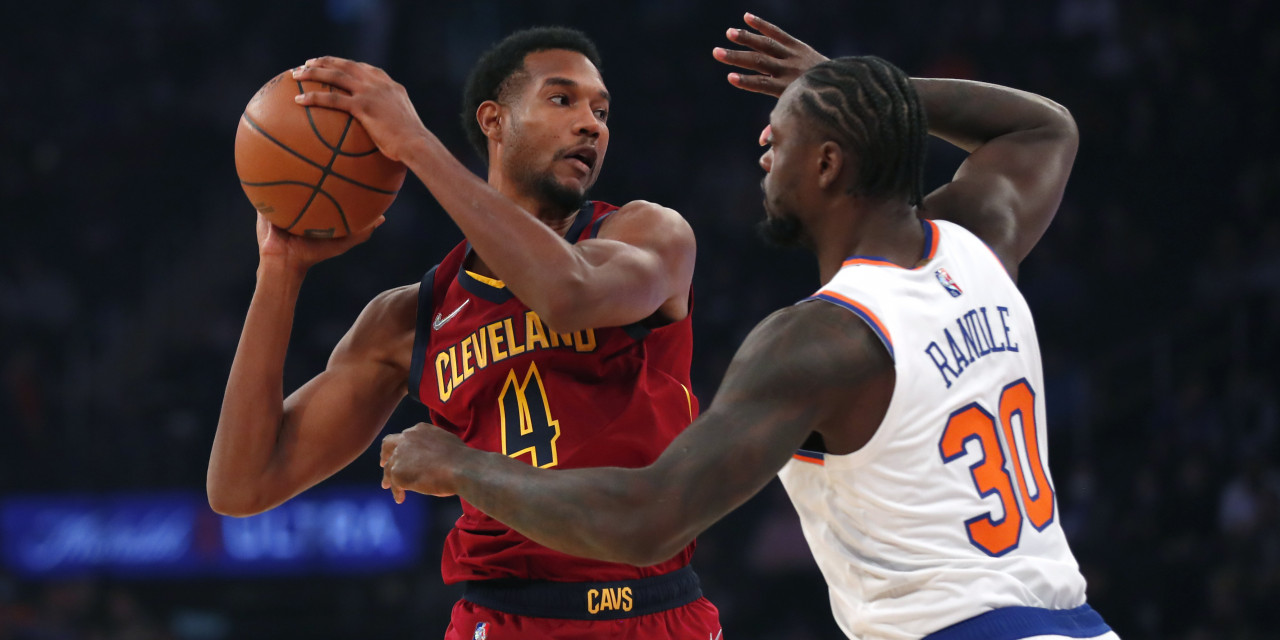 Cavs rookie big man Evan Mobley had a monster game in his Madison Square Garden debut, tearing up the Knicks in unprecedented fashion.

If there’s a bright side to a 17-point loss against a team most NBA consumers aren’t completely sold on as of yet, it’s that most NBA teams aren’t constructed like the Cleveland Cavaliers. Most teams—like, 30 or 31 of them—can’t field two seven-footers on any given night and have them contribute effectively, if not 100% equally. Exactly zero teams can field three of them. And though the Cavs were down one of their triplet towers in last night’s 126-109 win over the Knicks, with Lauri Markkanen remaining in health and safety protocols, it was the duo of Evan Mobley and Jarrett Allen that exploited the Knicks’ primary defensive issue to a T. Perhaps the Cavs have done New York a favor; perhaps they’ve keyed the rest of the league on how they can stop the otherwise red-hot Knicks from continuous success.

Mobley and Allen combined for 44 points and 26 rebounds, but the story lies primarily with the rookie Mobley, who notched a career-high 26 points in his first trip to Madison Square Garden. The World’s Most Famous Arena couldn’t have had lights bright enough to outshine Mobley; he was brilliant in every facet, shooting 73% from the field and picking the Knicks apart at every turn. It’s been said too many times already, but in his young career, Mobley has made it a habit of proving he has talent far beyond his years.

“It’s a big stage for anybody and it’s your first time playing at MSG,” Allen said of his frontcourt partner after the win. “They said it 10 times before the game—it’s the World’s Most Famous Arena. It really is. For him to come in and play how he did and play a career-high and close out the game on defense and offense how he did, it just shows a lot of growth. He has a long way to go in this league. He’s going to be Rookie of The Year in my opinion.”

Allen shares that opinion with the masses. Despite high expectations for top-two picks Cade Cunningham and Jalen Green in Detroit and Houston, respectively, and epic two-way efforts from Scottie Barnes up in Toronto, it’s Mobley who has had the greatest effect on his team. The Cavs, at an unexpected 7-4 to start the season, have now beaten six teams who made the playoffs last season, foremost among them being the Knicks, Hawks, Clippers, and Nuggets. They’ve largely done so on the shoulders of their youngest player; his averages of 14.9 points (third on the Cavs), 8.0 rebounds (second), and 1.3 blocks (first) per game (not to mention a team-leading 34.4 minutes per game) are certifiably ROY numbers. So far, they’ve proven to be winning numbers, too.

“Each game I’m learning where I can score,” Mobley said postgame.” I’m finding my spots in the offense that we run, so I feel like each game I’m getting better and better at that. I’m just trying to do what I do on the court. I know I got my guys around me to help me do that so it’s making it easier.”

Sure, his teammates have helped make it easier, but even that feels misleading considering how unstoppable Mobley has seemed this season, and how unguardable he appeared in particular last night. His 26 points were second on the Cavs—thanks to an uncharacteristically-blistering night from Ricky Rubio, who had 37—but his performance was undoubtedly the most impactful. He led the Cavs in plus/minus with a +26 on the night. And yes, he was able to score 18 points in the paint, which feels typical for a seven-footer, but he also made two of his four three-point attempts. If he can continue those sort of marks from beyond the arc, teams might as well pack it in before tip.

What Mobley did that was most detrimental for the Knicks’ chances, however, wasn’t merely his scoring. It was just how he was able to create his shots. Unlike most big men, Mobley has the dexterity and speed to knife his way through tight spaces, explode off of screens to pop out for a jump shot opportunity, and blow by bigger defenders off the dribble. What Nerlens Noel and Mitchell Robinson aren’t capable of, due to a bevy of reasons, is defending on the perimeter. They don’t have the agility that Mobley has; thus, he was able to use his ability to handle the ball like a guard in an effort to attack the rim like a forward.

Mobley’s other guard tendencies—seeing the floor like a point guard can, having the presence of mind to dump a pass to a baseline-dwelling teammate when he’s collapsed upon by the defense, constantly moving around the wing and free throw line extended in order to get open—are bound to be kryptonite for any team. But the Knicks simply don’t have bigs that can keep up. Julius Randle is a separate case all to himself, given that he stands 6-foot-8 and plays bigger than he is in reality and has a bit more mobility than his counterparts, but even he couldn’t stop what Mobley was pulling off.

If there’s one silver lining, other than knowing that 30 or 31 other teams in the league wouldn’t be able to bring the big-inflicted pain like these Cavs can, it’s that the Knicks weren’t total slouches defensively, particularly when it came to defending Allen in the paint. Randle, Robinson, and Noel combined for nine blocks and four steals, many of which came via cutting off Allen in the post.

And yet… to split hairs, one of my foremost abilities, it cannot be lost on us that too many of those great defensive plays resulted in a second chance for the Cavs. If the Knicks are to beat a team designed like this one, limiting second-chance points is bound to be vital. They only gave up 13 last night, but taking away those 13 points changes the complexion of the game. That, plus a few more makes down the stretch from RJ Barrett and Evan Fournier—both of whom were relatively, if not completely, cold last night—makes this a game that’s winnable for the Knicks, even if it’s not necessarily a win that they “deserve.”

New York heads to Philadelphia tonight to play a Sixers team it has already dominated once. While Joel Embiid has inside-out ability far more advanced than Mobley’s—the former is a perennial MVP candidate while the latter is a possible ROY, it must be mentioned—he doesn’t necessarily have the speed. Plus, the Knicks already rendered him close to useless when he and the Sixers came to MSG a few weeks ago. A repeat of that effort is entirely possible. Was last night discouraging, or merely a cautionary tale to build off of?

The blueprint is there for the Knicks to have success against bigger lineups, and though Philly certainly doesn’t have that, they do boast one of the league’s most devastating offenses, one that is bolstered by Embiid, first and foremost. If New York can hold him to a dud of a performance yet again, they’ll be welcome to bing bong all the way home. If not, then perhaps it’s time to hold up a mirror to the team’s schematic approach moving forward.