Changing of the Guards: Previewing the 2021–22 Knicks Backcourt 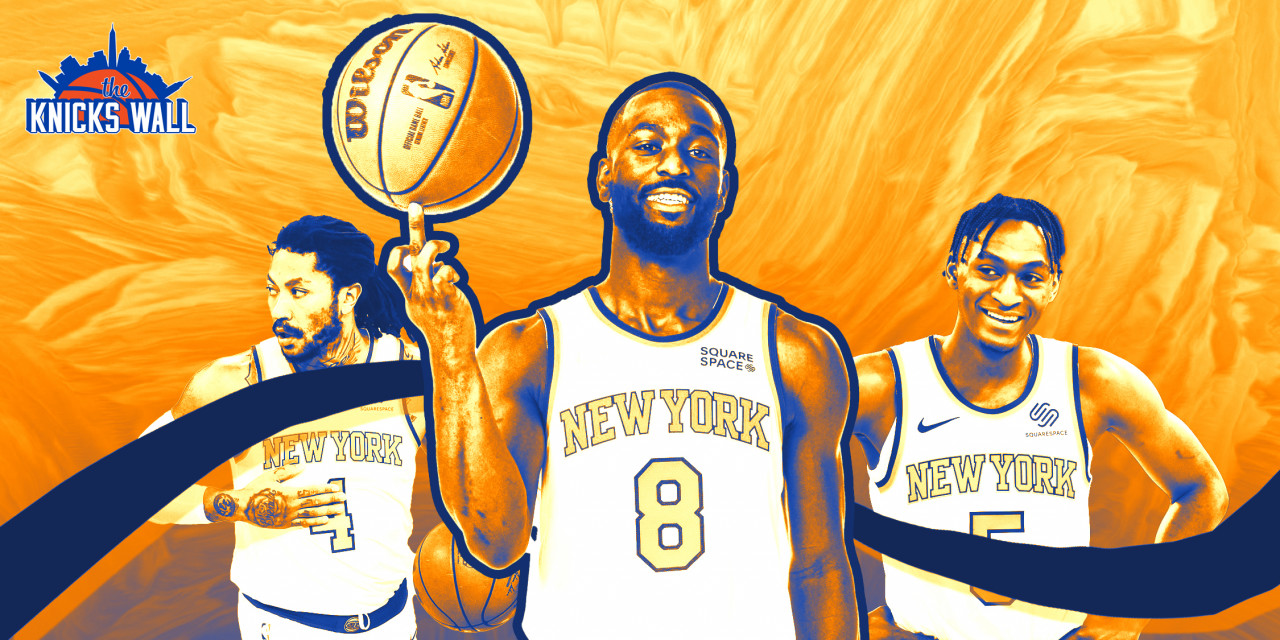 The talent is abundant in the Knicks’ guard rotation from the starters all the way down to their deeper bench players.

The New York Knicks’ collection of guards is very promising. It’s no longer a dream or a stretch or a lie we have to tell ourselves to stay sane—it’s the truth. The Knicks’ guard room is filled with intriguing, talented options that can both surround the team’s stellar forwards and lead the team in spurts.

Julius Randle and R.J. Barrett are New York’s most crucial players. Finding the right supporting cast is the key to unlocking the team’s potential. Last year, the team learned the hard way just how restricting it can be when it doesn’t do that, as they were flanked by one of the most lackluster backcourts in the league.

Elfrid Payton had a strong case for one of the worst players to start at his position—and just to start in general—last season. Take a look at who started the most games as a point guard last season and click on the stats to sort them. Payton is near the bottom in nearly every category, including last in assists per game and three-point percentage. Meanwhile, Reggie Bullock was an efficient spot-up three-point shooter but didn’t offer much else offensively, and that’s not what you’d want from your lineups’ third-best scorer. Especially in the playoffs, they were totally exposed for their weaknesses and rendered useless.

Last season saw 21 five-man lineups that played at least 5oo possessions, according to Cleaning the Glass. The Knicks’ two most popular starting lineups (Payton, Bullock, Barrett, and Randle with either Nerlens Noel or Mitchell Robinson) were both in the bottom five in both point differential and points per 100 possessions. Given the improvements from Randle and Barrett that certified them as the team’s best players and the massive defensive impact from the centers, it was clear who the main culprits were.

The Knicks’ front office provided major upgrades to both starting guard spots, retained the two key off-the-bench guards and added even more depth behind them. After what feels like an eternity, the Knicks have a complete collection of guards—one that might even be a little too full with good options.

The kid from the Bronx and the French Reconnection will likely make up the starting backcourt for this year’s team. Walker and Fournier can be a devastating offensive tandem by regularly sinking triples and creating their own shots when needed.

Concerns about Walker’s ability to stay healthy are valid. But so too are the predictions that he can elevate the Knicks’ offense when he’s ready to go. The four-time All-Star’s scoring repertoire is the epitome of shrewd, clever, slick. Because of his lighting-quick handles and propensity to shoot off-the-dribble, even from beyond the arc, Walker is tough to contain. As he grows older, he becomes less built to handle a significant offensive workload. Luckily, Randle and Barrett are built to do so.

Fournier has the right skills to take advantage of a defense scrambling to contain Walker, Barrett, and Randle. As a career 37.9% three-point shooter who has attempted 42.8% of all his field goals from beyond the arc, he can make defenses regret showing extra help, much like Bullock did last year. What separates Fournier from his predecessor is that he has the handles and playmaking to make something happen. He isn’t totally dependent on others making opportunities for him; he can do it himself from time to time.

The most pressing question regarding the Walker-Fournier pairing is its defense. More specifically: will they provide enough to stay afloat? I believe the answer is yes because the old dogs don’t need to be taught new tricks. Walker and Fournier don’t have to become strong defenders in order to thrive.

Although neither player has been widely touted as a good defender, they aren’t being asked to replace stellar defenders. Payton had his moments but was mostly not very good. Bullock was a pretty solid defender but was never someone that made a tremendous impact. All the while, the Knicks’ defense shined. So long as Tom Thibodeau can find ways to cover for Walker and Fournier when they get picked on by offenses—and he should, based on his coaching abilities and those of the other starters—they’ll be fine.

This Knicks backcourt may be a step back from last year’s backcourt on defense overall but will undoubtedly be multiple steps ahead on offense. That’s a clear upgrade. Walker’s injury is the only real area of concern. And even if he is unfortunate enough to miss weeks or months with an injury, the Knicks have the depth to patch up the starting lineup.

New York’s bench was a crucial part of their success last season, and the same crew is back for more. Once again, it will be orchestrated by Derrick Rose and Immanuel Quickley. The point guard duo was very effective last season and should find themselves in positions to succeed again.

Rose was one of the best reserves in the league last year, placing third in Sixth Man of the Year voting, and he told reporters at media day that he has no issues running it back in that role. His inside-the-arc scoring and playmaking are still his key strengths. Although his three-point shooting was also very good last year, that probably won’t be the case again. Rose shot 41.1% from deep last season, even though he had never been that good of a shooter in his career. It would be logical for him to have a regression. Even if he does fall back to being a below-average shooter, he should still be a key contributor.

Quickley’s sky-high confidence pairs nicely with Rose. As IQ enters his second season in the league, it’s important for him to continue his development as a lead creator for the offense. The scoring potential is there, no doubt, as Quickley scored 25 points thrice last season, more than anyone aside from Randle and Barrett. The playmaking potential is just potential as of now, but it exists. And with more reps, IQ should flaunt it even more.

It would best benefit the Knicks to start transitioning Rose’s lead role in the second unit to Quickley. Letting the youngster do more can only benefit him and the team’s future. He’ll have plenty of help around him in the form of Rose and Alec Burks, as well as an increasingly improving Obi Toppin. New York has the luxury of having a young point guard who can grow into a high-quality starter and a veteran who can guide him along the way.

Deuce McBride is the big reason why I said earlier that the Knicks might have too many good options. After such a strong showing in the Summer League, the second-round pick earned himself an honest look from Tom Thibodeau. But to no fault of his own, he might not see as much playing time as his skills say he should. There are just too many proven names ahead of him on the depth chart.

Is this NBA Summer League or Beyond Scared Straight? Deuce McBride has Sharife in JAIL 🔒 pic.twitter.com/Q3Kop9MOmL

On defense, McBride covers his opponent like white on rice. On offense, he boasts a picturesque jump shot. Someone as well-rounded as him would find consistent minutes on any other team. Unfortunately for him, the Knicks’ depth is among the best in the league. If anyone can scrap their way to more playing time, though, it’s him. At the very worst, he’ll be the first injury replacement. Walker and Rose could use some load management and McBride allows the Knicks to do so without worrying about the guard rotation.

The other third-string guard will likely be Dwayne Bacon, who spent last season with the Magic after being drafted 40th overall in 2017 by the Hornets. In 72 games and 50 starts last season, the 6-foot-6 guard averaged 10.9 points and 3.1 rebounds in 25.7 minutes per game. Bacon’s best attribute is his defense, as he can be used to guard wings and switch onto bigger players. Offensively, he provides slashing and not much else.

Overall, I don’t think it’s possible for the Knicks’ guards to fail them. The starters and backups have all proven to be effective scorers that can also make plays. While the group may be defensively deficient aside from McBride, New York thrived last season without a true stopper at the guard spot. The upgrades at the starting guard spots, as well as the talent that’ll back them up, make the New York backcourt players a group that can bound and astound.