Checking in on the EuroBasket Knicks 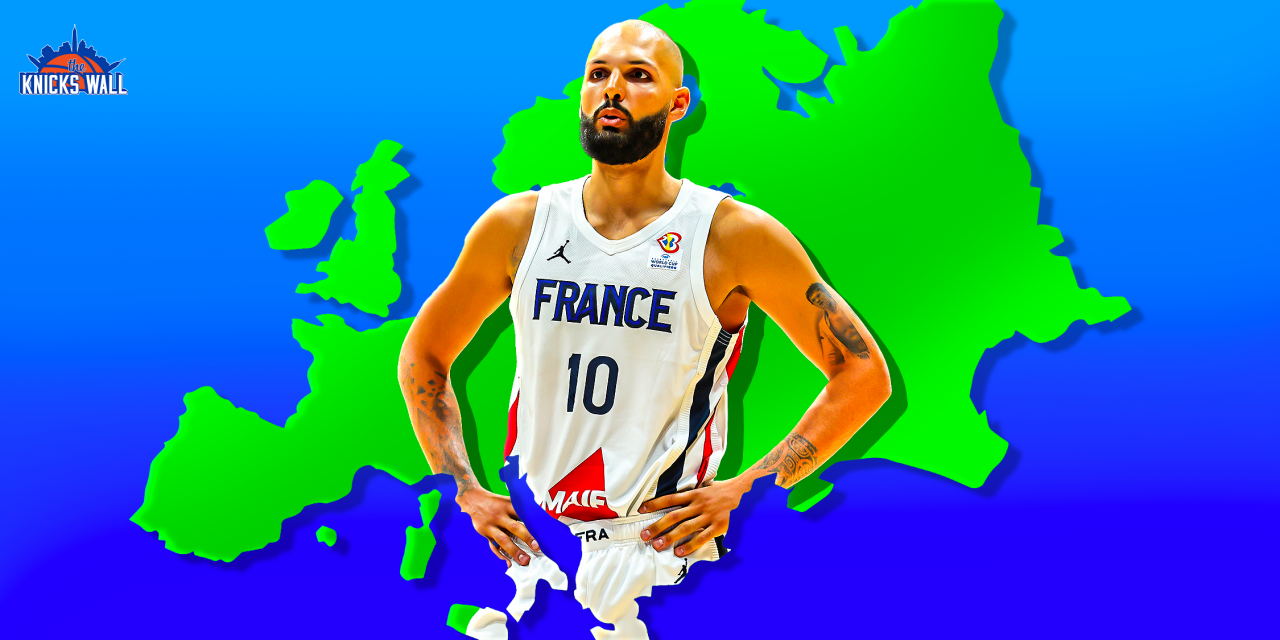 We’re reaching the end of slow season in the NBA calendar, but Evan Fournier and Rokas Jokubaitis are two Knicks already in mid-season form.

While you may be getting excited about football season here stateside, there is high-level basketball being played across the pond. 2022 brings us the return of the EuroBasket tournament, where international teams fight for European supremacy. This is a loaded tournament with some of the best international teams of all time, including three MVP candidates representing their respective countries. In such a rich time for international play, these teams are filled with NBA players across the board, including one current New York Knicks and one Knick to be: Evan Fournier and Rokas Jokubaitis.

The two best players on the floor were both Knicks:

* Fournier scored a game-high 24 points to go along with 5 rebs, 4 made treys and three assists

Knicks fans have vastly different relationships with Jokubaitis and Fournier, so it is interesting to see them both succeeding in playing as the best versions of themselves. Jokubaitis is taking advantage of his opportunity to play for his country. Playing alongside all-star Domas Sabonis, Jonas Valanciunas, and a pair of Knicks legends: Iggy Brazdeikis and Mindaugus Kuzminksis, Rokas is getting a significant portion of time to run the offense. At 21, it’s hard to be mad at him averaging eight points and three assists on the highest stage, and even more importantly he is showing the “clutch gene”.

Evan Fournier (27 points 5 rebounds 3 assists 2 steals) and Rokas Jokubaitis (14 points 4 rebounds 5 assists) both hit clutch shots down the stretch, but France was able to come back, take the lead and hold it. Another great EuroBasket game. France over Lithuania 77-73 pic.twitter.com/Ecv68AKlPV

While he finished with 14 points in the game against France, he had only four of those in the first half. He was able to help Lithuania fight back with clutch shots from deep as well as a couple of key plays made for his teammates. I think it speaks volumes about the young Lithuanian’s role with the team that not only is he on the court late in close games but is given free rein to make plays. Not only was he given the opportunities, but he was successful when needed the most. Even though he is only shooting 22% from beyond the arc in group play, he was able to make the most of his minutes.

The other thing that has stood out from Rokas early in international play is his ability to take defenders off the dribble. The “Group of Death” in this competition has earned its moniker for a reason. Lithuania has struggled, starting 0-3 in group play with games against powerhouses like reigning Eurobasket champ Slovenia and Olympic silver medalist France. Lithuania has lost close games in all three performances including a double-overtime game to Germany. These games have given Jokubaitis a chance to go up against some of the best defenders on the continent, and he has looked every bit up to the part of going at them. He has been explosive going to the basket and taking defenders off the dribble, putting him in advantageous positions to score or create easy buckets for his teammates.

WHERE DID THAT COME FROM!?

Unlike Rokas who has nothing but upside for Knicks fandom with tantalizing hypotheticals about the impact he can have as a “draft and stash”, Fournier is a known quantity. Nothing can ever be said positive about the French shooter without the context being brought up about his contract or who he was signed over. All of those comments are fair given the lack of success from such a big signing from this front office. With that being said, however, Fournier has been a successful NBA role player for a long time now and there is a reason for that.

Nothing will ever highlight that more than Fournier in his element representing his home country. If you ever watch a French international basketball game, you would think that the Knicks guard is the player making $205,000,002 and not his multi-time DPOY French teammate Rudy Gobert. The international game is very different from the NBA and it highlights scoring in an open-court situation, which makes Fournier extremely dangerous. He has shown that in international play throughout his career, especially with France’s success in the previous Olympics.

Nothing has changed for Fournier in Eurobasket. He is still a walking bucket against any defender that stands in his way. The game against Lithuania was a great example of that. Late in the game when France needed baskets, they gave him the ball and spread out. He was trading late threes in the game with Rokas but that was enough to put the game away for a French team led by his 24 points. He had 18 in the first half alone after getting hot from deep, where he is just out of his mind at the moment. Throughout the first three games for his homeland, Fournier is attempting nearly seven threes a game and connecting on 40% of them.

You see the role he is given in the numbers but the eye test is where it really shines through. His three-point shooting numbers are similar to what he put up in his record-breaking Knicks season and his scoring numbers are just a little better, but he is relied on to create the offense for France almost entirely. Their offense runs through him in a way that he does not experience in the NBA, and he is better off for it. He is far more efficient than you would ever expect and he helps France contend for international championships, as they are surely a favorite in this competition.

After his dominant performance against Lithuania, Fournier played just over 20 minutes against bottom-dweller Hungary. In the Group of Death there are not a lot of easy games, especially given the success of Jusuf Nurkic’s Bosnia and Herzegovina. The fact that Fournier played so little in the one game that France could breathe easily speaks to the importance he has in this context.

After struggling in the opening loss to host Germany, Fournier and France have gotten on the right track. It won’t get any easier in group play for them with Luka Doncic’s Slovenia still to come on the schedule. For France to make it out of the Group of Death as they are supposed to, it will be on the shoulders of their captain. He has put up remarkable numbers in France’s big games in the past and we will see if he can continue to impress.

France tried to rest its captain Evan Fournier a bit today. He played 23.5 minutes and scored 12 points with five assists and two steals as France survived a close one against cellar dweller Hungary, 78-74. Les Bleus now 2-1 in early EuroBasket. pic.twitter.com/iQWBaWZ5X6

The international play emphasizes scoring and puts much less stress on the defense – that is always going to make a player like Fournier look better, but right now he is on a short list for first-team all-Eurobasket. Group play has been very exciting, even providing a little bit of scandal and controversy. You’re missing out if you haven’t had a chance to watch, but there is still plenty of time left to go. It remains to be seen if both France and Lithuania will get out of their group but if they do, Fournier and Jokubaitis will be a major reason why. With the number of eyes on them on one of the biggest international stages, they will come out with higher expectations after these showings.

Evan Fournier cooking against Lithuania today 🤦🏽‍♂️ This FIBA game is his element. Has a knack for putting the ball in the cup.

We will be keeping you updated with how these players and teams are doing if you are not up to date with European tournaments. If the first few games are any indication, it will be a wild ride for everybody involved!

»Read: What can the Knicks do with their two open roster spots?