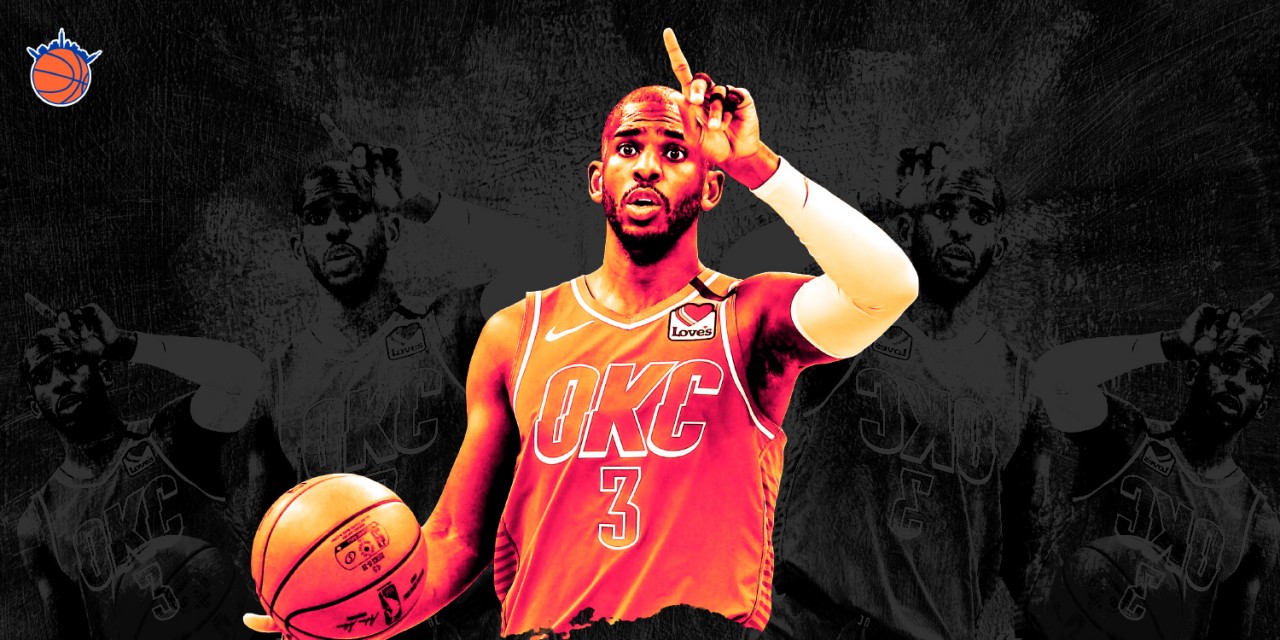 Chris Paul’s connection to new Knicks president Leon Rose has inflamed speculation of an offseason trade. Do the Knicks want to move in that direction?

Okay. Let’s tackle the aging elephant in the room with a giant contract.

Last week, when Ian Begley of SNY reported he thinks “there are still people with the Knicks that feel bringing Chris Paul onto the roster at this time would jumpstart the franchise’s effort to build a winning culture, to give the young players winning habits,” while some scoffed at the idea.

And yes, it ticks all the boxes of a classic Knicks fiasco. Paul is 35, has had nagging lower-body injuries over the past few seasons, and has three years left on a $159 million contract (with a player option for 2021–22). For those of you that are bad at math, that’s close to an annual $40 million cap hit. Seems like a recipe for disaster, and this organization seems to return to that recipe more than just about any other team in the league.

While we’re at it, let’s also hit the other elephant in the room. This is a rumor, nothing more. Other than Begley’s vague reference to “people within the Knicks,” there are no indications that this is anywhere close to a priority for the Knicks or the Oklahoma City Thunder right now (New Knicks President Leon Rose repped Paul in the past). And why would it be a priority? The league is collectively focused, as it should be, on coming up with a creative solution to bring NBA basketball back into our lives. Free agency and roster shuffling are barely on the radar.

But if a Chris Paul to New York deal is ever on the table this offseason, whenever it happens, the Knicks should do everything in their power to secure that deal. Why? Well, for a multitude of reasons, but above all, to establish that stupid, ethereal thing we call a “winning culture.”

The Knicks are not winners. Paul is still a really good basketball player, and he wants to win basketball games.

Look, Knicks fans don’t need to be reminded that their last winning season was in 2012–13, when Carmelo Anthony was a fringe MVP candidate, and not struggling for minutes in Portland. Since then, they’ve cycled through five head coaches (bonus points if you can name all five), and went through a bunch of weird stuff (the Derek Fisher/Matt Barnes episode, for instance).

The Knicks have also, during this very bizarre and miserable era of losing, had the three things that are supposed to save franchises: cap space, a big market, and talent on rookie deals (Remember Kristaps Porzingis?). Knicks fans also don’t need to be reminded that none of those things amounted to anything, really.

So, what is the missing link? Why won’t anything stick? Sure, fans can point to James Dolan’s antics or front office mismanagement, and they’d have a point. But the Knicks struck out big last summer, whiffing on the promise of Kevin Durant and Kyrie Irving (may have actually dodged a bullet there, but that’s besides the point), and then the problem, the real problem, the root cause of all this rot, became very clear: Nobody good comes to the Knicks because they suck, and everyone knows they suck because they’re the Knicks. Madison Square Garden shines brightest for its stars, and even brighter for its circus. Nothing goes unnoticed, especially losing.

Paul is declining, for sure, but one of many lost narratives in the wake of a season cut short by COVID-19 is Paul’s resurgence to All-NBA form in Oklahoma City. He is, by most metrics, still one of the 15 or 20 best players in the entire league, even as he enters the latter half of his 30’s.

His abilities as a playmaker are still borderline elite. According to a metric called Box Creation developed by Ben Taylor at Thinking Basketball, which provides an estimate of shots created for teammates per 100 possessions, Paul generates more offense for his running mates than guys like Kawhi Leonard, Ja Morant, Kyle Lowry, Kemba Walker, and Nikola Jokic. His 6.8 assists per game rank 16th in the league. And his telepathic skill at reading and bending defenses to his will remains second to none.

Paul will slow down with age, but that understanding of how to manipulate defenses doesn’t just evaporate over time. And he’s still a remarkably efficient scorer for a player of his size and lack of above-the-rim athleticism. Paul doesn’t look for his own shot nearly as much as other star playmakers like Luka Doncic, LeBron James, Damian Lillard, or James Harden. But he punishes defenses for overplaying the pass, and according to another Thinking Basketball metric that estimates the amount of spacing one player generates, Paul actually ranks higher than both Jayson Tatum and Kemba Walker, two of the NBA’s deadliest shooters.

Imagine, for a moment, Paul running this high pick-and-roll with Mitchell Robinson.

Now imagine the strong-side baseline defender, Lonzo Ball in the above clip, rotates to disrupt the lob lane, leaving R.J. Barrett in the right corner to attack a closeout or make a different play against a wobbly defense. Paul is not a good fit for this team; he’s a great one. The Knicks need a point guard, and if the Point God is available, they should go out and try to get him, especially since they’ll actually be one of the only teams with the cap space to soak up his monstrous contract without dipping into the luxury tax.

At the end of the day, here’s why you trade for Chris Paul if you’re the Knicks: He’s one of the best point guards ever, still playing at a very high level, and he never mails it in. That last bit is crucial. It’s a huge factor in the Knicks not even being in the conversation with big-name free agents every offseason. Guys like Durant and Irving, whether you as a fan wanted them or not, don’t look at the Knicks as an organization that hold themselves to the standard Paul does every night. It never seems like the Knicks as a whole know what they’re doing. There’s pieces that make sense, but there’s no driving force pulling them together into anything coherent. Paul is that force.

But at the end of the day, it makes sense why you don’t trade for Chris Paul if you’re the Knicks: He’s 35, and, well, that’s a lot of dead cap to invest in a 35-year-old. Magic Johnson retired at 32. Isiah Thomas retired at 33. Oscar Robertson at 36. Walt Frazier at 35. There’s not a lot of precedent for point guards, or any basketball player, really, aging well into their 30’s.

But this is a new era, one with improved sports science, and most of those guys didn’t leave the game because their skills decayed. Magic saw his HIV diagnosis cause an early retirement; Isiah tore his Achilles tendon after pushing the gas pedal too hard; Oscar was a key member of a Bucks team that went to the Finals his last season.

Let’s tackle the real elephant in the room. The goalposts need to be reset for the Knicks. This is not a “championship or bust” town anymore, and it hasn’t been for a really, really long time. So, even though trading for Paul wouldn’t, in any logical universe, vault the Knicks from laughingstock to title contender, it would be a much-needed step toward building that stupid, mumbo-jumbo thing we call a “winning culture.” This is a town that needs a leader that knows how to compete, someone who’s going to set standards in place for the team’s young talent to live by, someone who’s going to be the flag bearer for a new generation of Knicks basketball. And that person is Chris Paul.