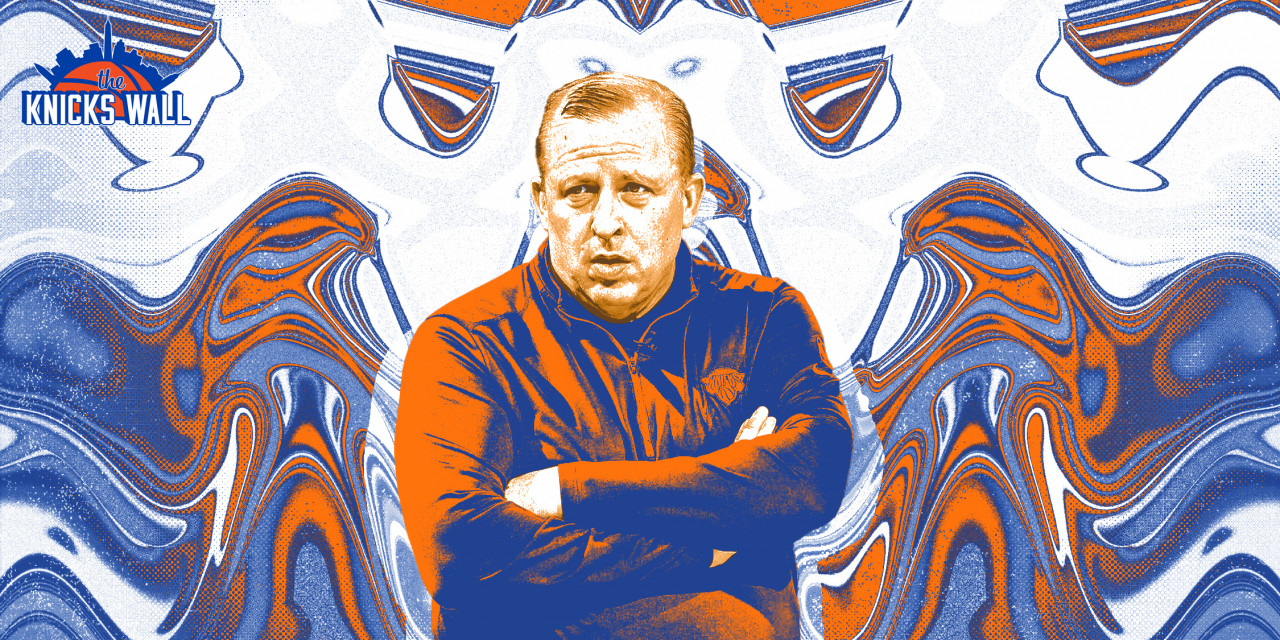 In order to build upon what the Knicks started last season, head coach Tom Thibodeau has kept his coaching staff largely the same.

Do you think Tom Thibodeau celebrated winning NBA Coach of the Year last season? He did crack a smile during his interview with TNT’s Inside the NBA and told Ernie, Kenny, Chuck, and Shaq, “Anytime you get an award like this, I’m obviously honored, but it’s more a reflection of our group and our organization.”

For Thibodeau, a good season is its own reward and one could bet that after hanging up on the TNT crew, the Knicks’ coach went straight back to work rather than popping a bottle of champagne. However, the Knicks went 21-45 during the 2019–20 season; they hadn’t gone over .500 since 2012–13, the year of their Eastern Conference Semifinals appearance. After struggling for the better part of a decade, 41 wins in a 72-game season would be worthy of a celebration, despite a first-round playoff exit.

The Knicks are still mentioned whenever superstar trade rumors start to stir, but for the time being, New York is approaching 2021 with a certain measure of continuity. Elfrid Payton became Kemba Walker and Reggie Bullock became Evan Fournier, but the core of the roster remains unchanged. The same can largely be said for their coaching staff.

Thibodeau brought the team’s former head coach, Mike Woodson, back to the Garden as an assistant to start last season. Woodson spent the four years between his stints in New York as an assistant with the Clippers, but the homecoming did not last long. In March, The Athletic’s Shams Charania reported that Woodson would return to his alma mater, Indiana University. Woodson told SNY’s Ian Begley that, “I would never have left the Knicks for any other job; there’s no way.”

New York didn’t hire another assistant to replace Woodson, however, and the rest of the coaching staff will return for Thibodeau’s second season with the squad. Associate head coach Johnnie Bryant was an assistant in Utah who started in player development. Darren Erman, an assistant, got his first job in the NBA as an assistant in Boston in 2007. He also spent time on the bench with the Golden State Warriors and the New Orleans Pelicans. Erman spent the 2019–20 season as the head coach of the G League’s Maine Red Claws before the Knicks hired him.

Kenny Payne was John Calipari’s associate head coach from 2014–20, until he joined the Knicks staff, while Dice Yoshimoto, “assistant to the head coach,” met Thibodeau in Chicago as a video coordinator and joined him in Minnesota in a similar role to that which he has now.

Andy Greer’s first job as an NBA assistant was with the Knicks when he joined a staff that already included Thibodeau in 2001. He left with Jeff Van Gundy for Houston in 2003, a year before Thibodeau did the same. Greer’s since been a scout with the Trail Blazers and Team USA, as well as an assistant coach with the Grizzlies and the Raptors. Plus, he’s been on Thibs’ staff in both Chicago and Minnesota. His brother Larry is also a part of the organization, hired as an advanced scout last November after spending the prior season as an assistant coach with the Suns.

Knicks have hired Larry Greer as an advance scout, according to a league source. Greer had been a Suns assistant last season. He's the brother of new Knicks assistant coach Andy Greer. He worked for Tom Thibodeau in Minnesota.

Thibodeau is known for his grit-and-grind old school mentality, but the staff has leveled out at a happy medium of youth and experience, allowing for a very good cop, bad cop dynamic. Payne, having just left a college powerhouse, is particularly suited to relate with young players in a way that Thibs—who lauded Payne for “[his] outstanding ability to forge relationships with players and improve their skills”—simply cannot.

The varied backgrounds of the Knicks’ coaching staff give them a wide breadth of perspectives to call on. However, with Woodson’s departure, Thibs will not have another former NBA head coach to bounce things off.

The 2012–13 Knicks that Woodson coached led the league in three-pointers taken, and the 2021–22 Knicks are primed to play similarly. Last season New York finished third in three-point percentage, and with an improved roster, Thibodeau is ready to let it fly again. He told Mike Vorkunov of The Athletic, “The big thing was we knew we were going to have work on our shooting. The four-point shot, we liked the concept of it. You’re seeing what these players are doing. Sometimes those are good shots depending on how you get them… There’s a lot of benefits to it. And I think that’s where the game is going. We’re trying to take advantage of it like most of us in the league are.”

The three-point barrages from Woodson’s Knicks were taken more as a necessity, and they did regress afterward—averaging four fewer attempts a game during the 2013–14 season, which cost Woodson his job. Having him next to Thibs on the bench would have been useful if only as a sort of Jacob Marley to Thib’s Scrooge. “You will wear the chains you forged in life Tom, forged link by link, long two by long two. Abandon the threes at your own peril.”

At this point, however, Woodson’s absence is nitpicking. The improvement from 2019–20 to last season was plain to anyone who’s watched the team under both former head coach David Fizdale and Thibs, and now the staff has had nearly a full season and offseason to implement this system.

For once, things are stable.

»READ: Taj Gibson could own the role of player-coach this season