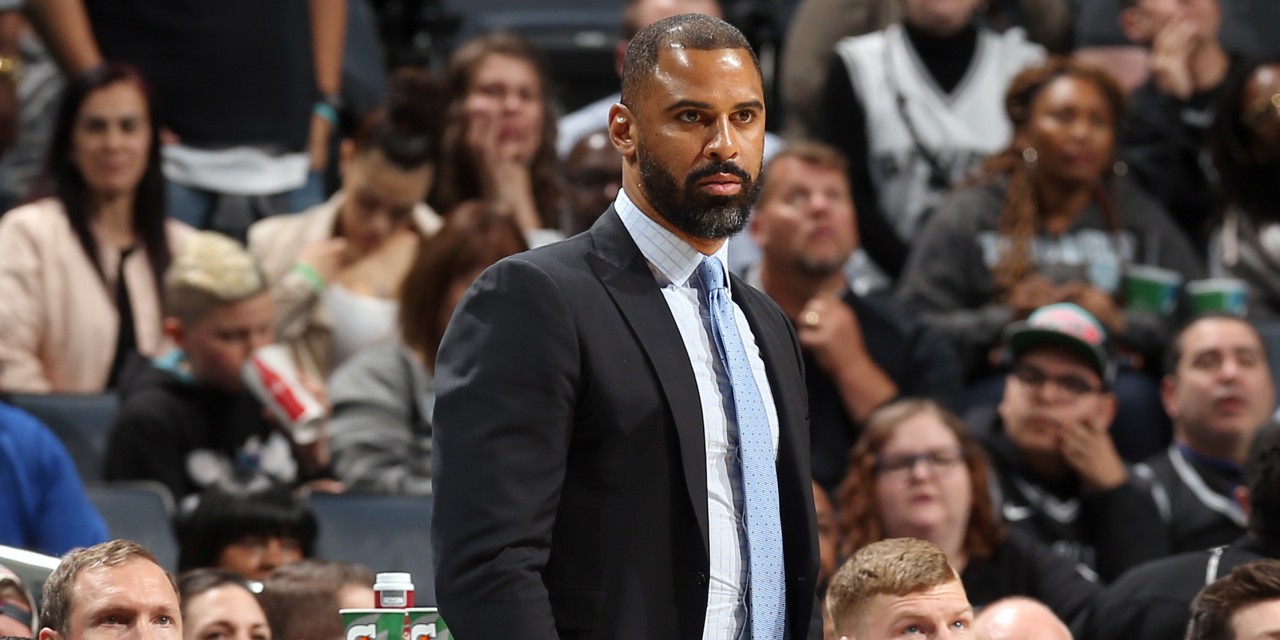 While Tom Thibodeau is considered the front-runner, the Knicks have several lesser-known personalities filling out the head coach search.

The pool of New York Knicks head coach candidates is a blend of familiar faces and new names making some of their first appearances in coaching candidacy discussions.

Not surprisingly, the better-known names dominate the discussion. New York fans are now acquainted with interim head coach Mike Miller, who is one of the front-runners to land the job. Tom Thibodeau and Kenny Atkinson, the two other most prominent names being considered for the job, are well-known coaches with histories of success. Dark horse candidates Mike Woodson, Jason Kidd, Mike Brown, Jeff Van Gundy and Mark Jackson are notable basketball figures, too.

In addition to interviewing Thibodeau, Atkinson, Miller, Brown, Kidd, and Woodson, Knicks president Leon Rose will sit down with some seldom known assistant coaches from around the league. Each of those five men has worked in the NBA for at least the last five years. Four of them are younger than 50 years old and four of them have worked with multiple teams.

None of them have experience as an NBA head coach, but all are unique, smart basketball minds with valuable backgrounds working as alongside great coaches, and who knows, maybe they leapfrog the favorites to earn the gig. Here they are from youngest to oldest.

The Knicks’ interview with Hardy was reported by ESPN’s Adrian Wojnarowski. The youngest candidate of the group has spent his entire NBA life with the Spurs. Beginning as an intern when he was 21 years old, Hardy climbed the ranks of the San Antonio organization to become an assistant coach, which he has been for the past four years.

Hardy raved to The Athletic’s Jabari Young about all the basketball minds that have been influential to him in San Antonio, Gregg Popovich being the chief amongst them. Others include Tim Duncan, Tony Parker, Manu Ginobili, Mike Budenholzer, Brett Brown, and fellow Knicks head coach candidate Ime Udoka.

Awesome news! So happy for him!

Always knew Will Hardy was gonna make it to the front of the bench! ? https://t.co/PWI6adr4Ck

Upon Hardy’s promotion to assistant coach, Popovich said he “has proven to be someone who really has a knack for the game” and that as he got more experience working directly with players, “it became apparent that he’s got to be somebody that we continue to groom in this program.”

In the same video, Kawhi Leonard said that Hardy “is a great guy. He loves what he does, you know. We’re close and he dissects my game by giving me my weaknesses to work on and also my strengths. I think he’ll be a great coach in the future when he wants to become a head coach.”

Hardy also served under Popovich for Team USA during the 2019 FIBA World Cup. He coached San Antonio’s summer league team in 2017 and 2018.

Delany, whose candidacy was reported by Wojnarowski, has coached as an assistant for the past six seasons. He started with the Charlotte Hornets and worked with the Orlando Magic for the last two years.

Before becoming an assistant coach, Delany spent a decade with the Miami Heat, starting his tenure with the video department and serving as an advance scout from 2007–13, which included a five-year stretch where Delany worked with David Fizdale, who was an assistant coach. Delany also coached Miami’s G League affiliate (the Sioux Falls Skyforce) in the 2013–14 season, achieving a regular season record of 31-19 and reaching the semi-finals.

Delany coached the Magic’s summer league team upon joining the franchise. In that role, his metric for success was how well he established a good culture with Orlando’s young players, he told the Skyforce.

“I think the biggest thing is about our core guys. The Magic players that are going to be playing for us this season,” said Delany. “To make sure that everybody is organized to make sure everybody on the roster is comfortable with each other. Seeing some of our young guys here over the last few weeks has helped me learn how we want to utilize them and how we want to see them play. At the end of the day, it’s always about developing players and seeing what they’ve learned… I want to see our guys progress and then take advantage of their opportunities to show that.”

In Delany’s two years with the Magic, Orlando is on pace for a second consecutive season with a playoff berth and a top-10 Defensive Rating in the league.

Mosley’s interview with the Knicks was also reported by Wojnarowski. Mosley has been an assistant coach for the past 14 seasons, the last six of which came with the Dallas Mavericks.

With the Mavericks, Mosley has been their defensive coordinator for the last two seasons and their summer league team’s coach for the last three years. The New York Daily News‘ Stefan Bondy reported that Mosley often does 1-on-1 work with Luka Doncic and the New York Post‘s Marc Berman reported that Mosley is adept with analytics and “is a key ear for Carlisle as far as in-game decisions.”

Mavericks coach Rick Carlisle said Mosley’s “got a great reputation with player development” and that he’s earned the opportunity to interview with New York.

Before his time in Dallas, Mosley spent four years with the Cleveland Cavaliers as an assistant coach and four years with the Denver Nuggets as an assistant coach, player development coordinator, and advance scout. During Mosley’s tenure in Denver, Carmelo Anthony—22 years old when Mosley arrived—continued to develop into one of the league’s most dangerous scorers and the Nuggets reached the Western Conference Finals.

Mosley explained to the NBA Coaches Association his coaching philosophy relies on relationships. “As I’ve gotten more and more into this game, I think turned into the relationships and the feel for your team and who you have on your roster and the best way to put these guys in positions to succeed,” Mosley said.

Mosley was a 1,000-point scorer and All-Big 12 Third Team member at the University of Colorado along with playing overseas for four years in Australia, Spain, and South Korea.

Udoka is the only former NBA player in this group. At 6-foot-6, he played small forward for seven seasons, playing as a Knick for the last eight games of the 2005–06 season and spending the bulk of this career with the Spurs. The news of New York’s interest in him was reported by Shams Charania of The Athletic.

Shortly after wrapping up his NBA career, Udoka returned to the San Antonio bench as an assistant coach in 2012. He spent seven years there before taking an assistant coaching job with the Philadelphia 76ers for the 2019–20 season.

Will Hardy, who worked alongside Udoka in San Antonio, praised his former coworker. “Ime with players, his ability to understand what it’s like to be a player and that certain situations are tough. He’s somebody that I really look up to.”

Spurs players have been complimentary of Udoka, too. “We got cool when he came [on] with the Blazers,” All-Star LaMarcus Aldridge, who played alongside Udoka in Portland, told ESPN’s Francis Okupa. “He’s a good guy, works hard so I just got close to him then. He’s been kind of like the middle man, trying to help me and how I feel [get] across to the coaching staff. He’s trying to help me feel more comfortable every year.

“He’s been the guy that I work with every summer since I’ve been here. He’s been a big part of me getting more comfortable…I think he’s gonna be a big time head coach. He understands the game, he played, he’s kind of like Pop’s right hand man at times here. I think once he gets the opportunity, he’s gonna be great.”

Fleming’s interview for the job was reported by SNY’s Ian Begley. Fleming has been an assistant coach in the NBA for the past five seasons, spending last season coordinating the Chicago Bulls’ offense.

As a head coach, Fleming has enjoyed success coaching in and for Germany. A torn ACL he suffered playing professionally in Germany ended his playing career but kickstarted his coaching career, according to K.C. Johnson of NBC Sports Chicago. Per Johnson:

Fleming began developing a reputation as a strong communicator and teacher with offensive acumen. His success led to getting hired by Brose Bamberg, which he led to four German League championships and with whom he earned a Coach of the Year honor.

Fleming coached the German national team in European championship tournaments in 2015 and 2017, working with players like Dirk Nowitzki and Dennis Schröder. His first NBA job was as an assistant coach under Mike Malone with the Nuggets in the 2015–16 season.

After a year with the Nuggets, Fleming bounced to Brooklyn, arriving at the same time as Kenny Atkinson. Fleming would help Atkinson resurrect the Nets, developing a hopeless, futureless team into a playoff squad. After three years serving under Atkinson, Fleming became Jim Boylen’s lead assistant coach in Chicago.

The Bulls’ offense showed slight improvement from last season. Under Fleming, improving in points per game and Offensive Rating by roughly two ticks in each statistic. Chicago already shot over 150 more three-pointers in this season than they did in the 2018–19 campaign. The Bulls, with Fleming, also averaged more assists per game.