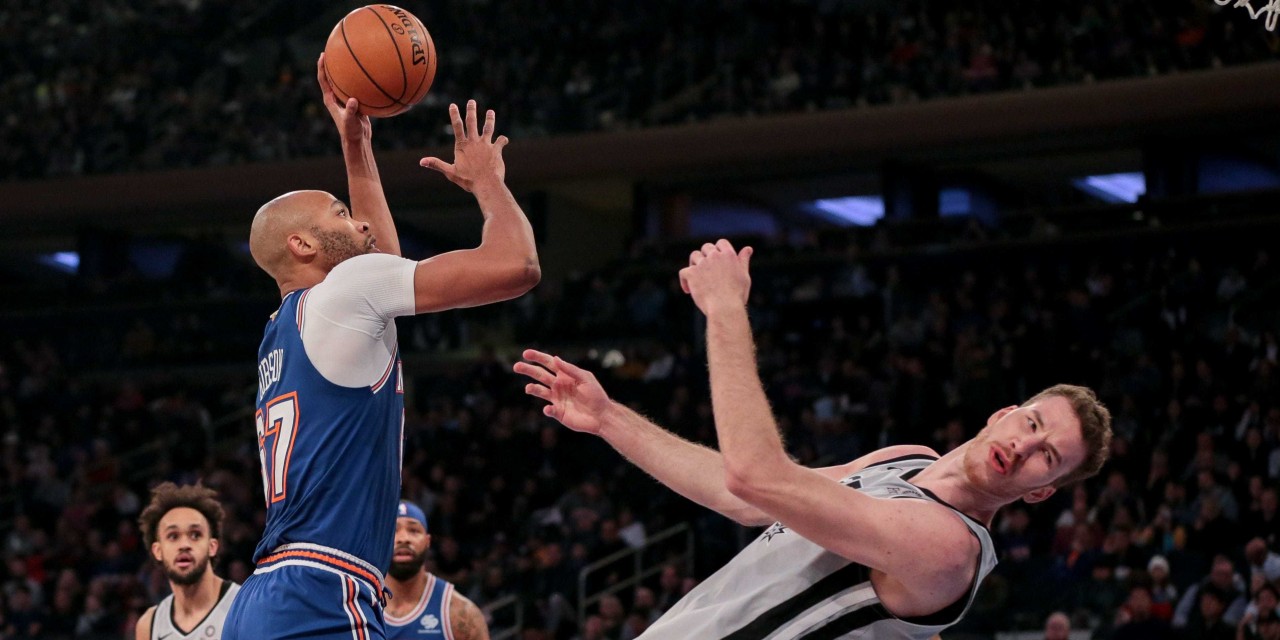 The Knicks were terrible through three quarters on Saturday, and their common fourth-quarter late comeback wasn’t enough against the Spurs.

The San Antonio Spurs defeated the New York Knicks by the final score of 111-104 on Saturday night. LaMarcus Aldridge finished with 23 points, six rebounds, three assists, and three blocks for San Antonio. For the Knicks, Marcus Morris finished with 20 points, seven rebounds, and four made threes. With the loss, the Knicks have moved to 4-12 on the season.

It’s a frustrating process, watching the Knicks continue to face teams that are better and see them knock them out within the first 24 minutes. The Spurs, despite entering Madison Square Garden with an eight-game losing streak, are a better team than the Knicks and made it well known within…24 minutes. By the end of the first half, the Knicks were down 25 and boos rained down from the crowd.

A sizeable group of fans chanted "sell the team" briefly, but loudly, late in the second quarter of Knicks-Spurs at Madison Square Garden. NYK trails San Antonio by 25 at halftime and was booed loudly at the half.

This was a game of San Antonio’s experience against New York’s mistake-prone defense. The combination of ball movement and the extra pass overshadowed San Antonio’s poor shot selection—mostly mid-range shots, but DeMar DeRozan and Aldridge are great at those—which killed the Knicks. After one or two passes, the Spurs found open shots with ease.

In the end, San Antonio finished with 53% shooting from the floor and 52% from the floor. It was the combination of DeRozan and Aldridge as lead offensive options, but Patty Mills was key off the bench. Mills finished with 17 points and five made threes, giving the Spurs the shooting needed to keep New York’s defense honest.

Four of San Antonio’s five starters finished with at least three assists, which is something you may never see from this iteration of the Knicks.

David Fizdale had a terrible coaching performance. He coached well in the most recent three games, but he continues to balance the big men poorly. He gives Julius Randle a bit too much rope, and I don’t find the use of Wayne Ellington all that great. With that being said, it’s clear that he has no chance with this roster as currently constructed.

To New York’s credit, they fought. The second half, largely a write-off on the Spurs’ part, was New York fighting back against San Antonio’s large lead. David Fizdale went with more shooting, allowing Ellington to come in and help spark a comeback. Morris completed a four-point play to cut the lead to eight.

But the Knicks’ defense did it again. After three straight successful possessions on defense (we’ll get to that) the Knicks doubled Aldridge, who got the ball to Derrick White, who found DeRozan for a wide-open dunk. That dunk extended San Antonio’s lead to 10 with 1:11 left and the Knicks went quietly into the night.

Let’s talk about the notes.

FRANKIE CLAMPS with the EXCEPTION defense leading to the transition dime to RJ pic.twitter.com/9eHZOz0dts

The Knick stay at home to host the Kyrie Irving–less Brooklyn Nets on Sunday.