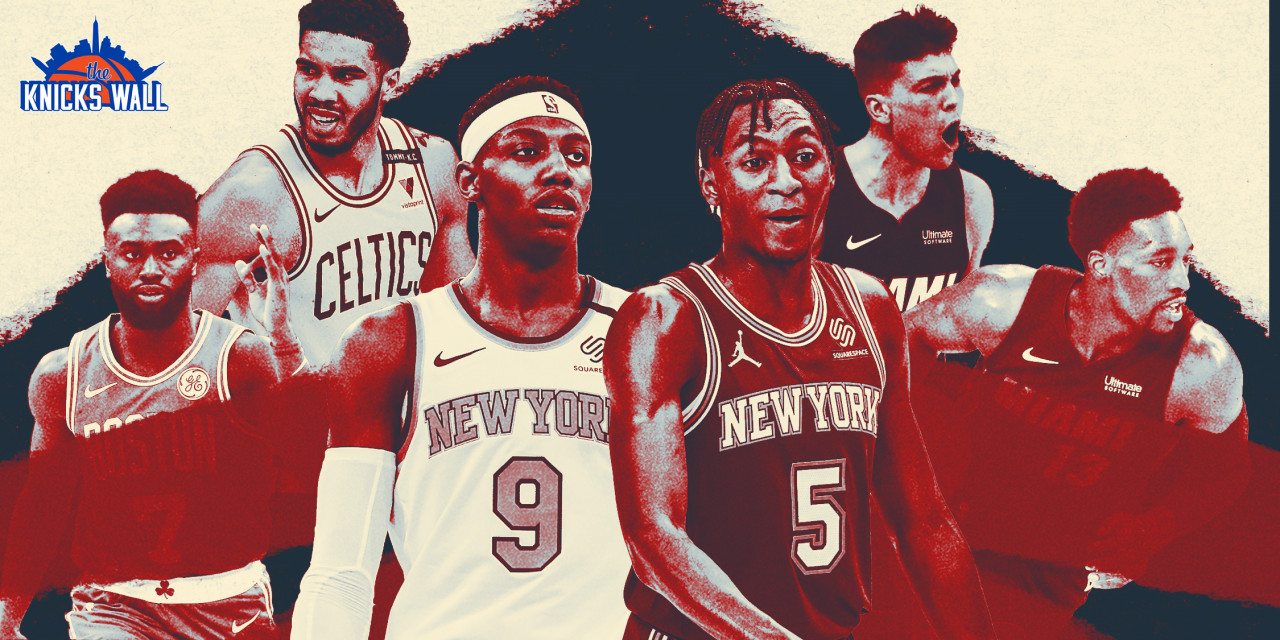 Today’s losers are tomorrow’s stars. The Knicks, Celtics, and Heat were eliminated in the playoffs early, but they have young talent to compete tomorrow.

With September just beginning, it’s officially the dog days of the NBA offseason, a time when players and coaches get some much-needed rest and fans reflect on the previous campaign. However, a usually grueling period for the New York hoops community will be different this time around. Instead of having to watch, read, and hear about dysfunction and uncertainty surrounding the team’s future, Knicks faithful now has a postseason-caliber core that appears to be intact for the foreseeable future.

Considering the Knicks both made the postseason in 2020–21 and are filled to the brim with blossoming young talent, they are in a uniquely advantageous situation. The ‘Bockers are one of few teams who can claim to be simultaneously competing at a high level in the present and building for the future.

Because the Knicks fell in the first round of the postseason to the Atlanta Hawks, it makes sense to compare their young core to opposing squads in somewhat comparable situations to gauge the competition. The Boston Celtics and Miami Heat are clubs who bowed out in round one along with the Knicks, and both boast intriguing young nuclei. Let’s delve into some notable youngsters that these two teams boast about and then come back to New York and how they stack up against their Eastern Conference rivals.

(Disclaimer: all of the players to be mentioned are 25 years old or younger.)

The Heat are gunning for a title run. Veteran additions Kyle Lowry, P.J. Tucker, and Markeiff Morris, coupled with Duncan Robinson’s extension, prove that Miami is all in on this team, spearheaded by Jimmy Butler and Bam Adebayo. And for a good reason, as they are a mere one season removed from an NBA Finals appearance. Though with Lowry 35 years old and Butler 31, this group’s title window as constructed is only so long.

As of this moment, Adebayo is well on his way to approaching perennial All-Star territory, if not there already. An elite facilitator (5.4 assists per game last season) and ball-handler, Adebayo is a big with the skills and instincts of a guard. Not to mention he was a nightly 20-10 threat with averages of 18.7 points and nine rebounds in 2020–21. And defensively, he established himself as one of the very best in the game; his lateral quickness, strength, and defensive I.Q. allow him to guard positions 1-5 legitimately. Aside from the three-point shot (0.2 attempts per game for his career), there aren’t any real holes in his game.

Herro was one of the stars of the NBA Bubble in Orlando back in 2020. People quickly crowned him the next great shooting guard after dropping 37 points on the Celtics in Game 4 of the Eastern Conference Finals. However, Herro’s sophomore campaign didn’t pan out like many expected; his stats were quite similar to his first-year numbers, and he struggled mightily in Miami’s lone playoff series against Giannis Antetokounmpo and the Bucks (9.3 points per game on 31.6% shooting). Herro could very well be an All-Star someday, but if the report about Pat Riley not wanting to deal Herro for Harden is true? Miami made a huge mistake.

Okpala has suited up in just 42 games since entering the pros out of Stanford. Limited opportunities to play in the Summer League or G League because of COVID-19 may have hindered his development. Nonetheless, at 6’9″ and 215 pounds, Okpala competes on the defensive end and has flashed a bit of perimeter shooting chops as well, such as when he nailed six treys during a preseason game in 2020. Okpala is a work in progress, but he fits the Heat culture perfectly as a hard-working, defensive-minded player and thus might have a long-term home in Miami.

The Celtics were undeniably one of the league’s most disappointing teams last season. That said, with up-and-coming superstars Jaylen Brown and Jayson Tatum just 24 and 23 years old, respectively, the Knicks’ division rival remains in an enviable position, even if their treasure trove of assets has evaporated. The offseason additions of Dennis Schröder, Al Horford, and Josh Richardson were what Boston needed to rekindle their defense-first identity. Expect the 2021–22 Celtics, now coached by Ime Udoka, to look more like the Brad Stevens-led teams who scrapped their way to 50-ish wins.

Any list of the most entertaining players in the NBA should include Tatum. The former Blue Devil epitomizes the term professional scorer; he put up a career-high 26.4 points per game in 2020–21 while finishing in the top 50th percentile in accuracy from all three levels of the floor, per Cleaning the Glass. It’s worth noting that Tatum was this efficient with an incredibly high usage rate (98th percentile among wings), making his scoring precision all the more impressive. And the fact that his playmaking grew leaps and bounds last season (career-best 4.3 assists) spells trouble for the rest of the league.

The Brown and Tatum tandem is perhaps the deadliest duo under 25 years of age in all of basketball. While Tatum is the better player of the two, Brown made the bigger leap last year. His scoring output shot up noticeably from 20.3 to 24.7, and, amazingly, his field-goal and three-point percentages marginally improved. The defining improvement in Brown’s game was his handle; it’s now air-tight after being shaky at best to begin his pro career. With newfound confidence in his ball-handling ability, Brown created his shot more frequently and effectively than ever before, which played a huge role in his breakout campaign. They say the hardest part of winning a championship is acquiring the right stars. If that’s the case, the Celtics already have the most challenging part figured out.

Pritchard quietly put together a solid rookie year for himself in Boston. Foremost a lights-out shooter, Pritchard converted 41.1% of his threes on 3.8 attempts per game as a neophyte. His range is almost limitless as he attempts shots from well beyond the line without hesitation, almost like Quickley. Beyond perimeter scoring, Pritchard has solid point-guard skills and sees the floor well (averaged 1.8 assists as a rookie). He just recently wrapped up an excellent Summer League in which he tallied splits of 16.8 points, 8.5 assists, and 5.8 rebounds. Yes, Summer League only means so much, but Pritchard’s all-around performance is just further evidence that he is in store for a long NBA career.

Barrett was New York’s top-performing youngster by a wide margin. Aside from steals, he achieved career-bests in every major statistic as a sophomore and was New York’s unofficial number-two scoring option all season long, a heavy burden for someone just barely old enough to drink alcohol. Barrett’s evolution as a long-range shooter is what sticks out more than any other aspect of his growth from year one to two. Once considered a hole in his repertoire, Barrett transformed into a reliable deep threat as the season progressed. He shot 40.1% from deep on 4.3 tries nightly when the season was all said and done. With this in mind, fans should be optimistic that Barrett will hone other aspects of his all-around game as he ages.

Quickley could very well go down as being the steal of the 2020 NBA Draft. He almost instantly staked his claim as perhaps the best pure shooter on the 2020–21 roster, along with Reggie Bullock. Quickley’s 38.9% clip from three as a rookie is impressive in itself. But this mark becomes even more eye-opening when recognizing that half of all his field-goal attempts came from beyond the arc (68th percentile among combo guards). Additionally, a staggering 39% of them were unassisted (85th percentile). His two-point efficiency of 40.2% leaves a lot to be desired, but Quickley’s three-point jumper alone makes him an ideal fit on the court alongside Barrett and Julius Randle.

Toppin didn’t quite live up to the expectations that come with being a top-10 pick. Because he was prone to defensive lapses, he never became a consistent member of the rotation during the regular season; Thibodeau has little patience for rookie mistakes, particularly on the defensive end. But Toppin deserves flowers for saving his best basketball for the postseason. He was one of the few brights spots in a wire-to-wire first-round defeat to Trae Young and the Hawks, averaging 6.4 points and 2.6 rebounds in 13 minutes of play. And now, heading into his sophomore year fresh off a Summer League in which he was named to the All-Summer League First Team, Toppin has been trending nowhere but up since a rocky start to his pro career.

All in all, while Toppin, Quickley, and Barrett are three players who project to be key pieces of the Knicks’ future, they don’t quite stack up with the likes of Boston with Brown and Tatum or Miami with Adebayo and Herro. After all, three of those four names are older than any of New York’s top three kids, so in time the gap between these young cores may shrink. Barrett/Quickley turning into All-Star-caliber players and Toppin a rotation mainstay are realistic outcomes and would certainly help matters. But at this moment in time, the edge in young talent goes to Boston and Miami.

»READ: Immanuel Quickley can be a lead creator — or point guard — for the Knicks