The Knicks may very well choose to select their next point guard with their later first-round draft pick instead of their top-10 selection, with plenty of options available for them.

It’s no big secret that the 2020 NBA Draft is one of the weaker classes in recent memory. With a lack of surefire star power and major question marks among most of the top players, there are plenty of reasons not to be excited about this year’s incoming prospects.

But the one thing this class has in droves is point guards. LaMelo Ball, Killian Hayes, Cole Anthony, and Tyrese Haliburton are generally considered the top lead guards of the class, and chances are the New York Knicks will have a shot at at least one of them when it comes time to use their first pick on draft night (re-scheduled for October 15th).

But there is another group of point guards further down most big boards that offer their own intrigue, a collection of five to seven guards slated somewhere between the mid-first round and early-second, and it’s these players that I’ll be looking at today.

One note: readers will find three names that don’t appear in this breakdown: Kira Lewis Jr., Theo Maledon, and Jah’mius Ramsey. There are a couple reason for this. I believe that Lewis will be more of an early-to-mid first-round pick, where most of the other players discussed fall further down the rankings. Maledon and Ramsey will be more likely to fall in the combo guard role—similar to R.J. Hampton—than in the pure lead-guard role.

So with that said, let’s take a look at some of the later-ranked point guards to see how they could fit with the Knicks, should they choose instead to grab an offense initiator with their second of two first-round draft picks.

Tyrell Terry is a 19-year-old sharpshooting point guard from Stanford, and might be my favorite late-first-round prospect in this year’s class. While small at 6’2″ with a frame that doesn’t look ideal for adding a ton of muscle, he’s not only an absolute sniper from outside (48% on catch-and-shoot threes, per The Ringer) with genuine 40/50/90 potential, he’s also surprisingly crafty and effective around the rim. He’s a solid rebounder for his size, and despite his physical limitations, shows some flashes of having decent defensive instincts.

He also spent his season at Stanford learning how to be effective off-ball, and has already found ways to be dangerous in that role, relocating to the corners and showing impressive flashes of cutting ability.

Here are all 11 of Tyrell Terry's 3 attempts from his 2nd game vs. Utah. Sure, it was his best shooting performance from last season (7/11) but think it highlights his shot versatility (off movement, pull up, catch & shoot) pic.twitter.com/qSjWJN7P9Y

With such a perfect skill set for today’s game, it’s fair to wonder why he’s generally considered a late-teens to late-20’s pick, and if he’s available for the Knicks at no. 27, it will be looked back on as a steal of a pick in a few years. But there are areas of concern.

For starters, he’s not a great floor general, sporting a 1.21 assist-to-turnover ratio and only recording three games with more than five assists out of the 31 games played. He’s also a lock to be targeted in the pick-and-roll due to his size, and he has the unfortunate habit of getting shaken very easily when defending the point of attack. It will be crucial to surround him with versatile defenders who can cover for him if he’s going to be a starting point guard at the next level. Luckily, between R.J. Barrett, Frank Ntilikina, and Mitchell Robinson, the Knicks would be in a decent position to do just that.

It’s easy to look at his quick release and devastating pull-up game and think “Steph Curry lite,” but let’s put the kibosh on that immediately. Terry is nowhere near the ball handler Steph was, even in college, and probably won’t be nearly as good a defender or passer either. But for a team as starved for self-creation from the perimeter as the Knicks, Terry would be an absolute godsend. If he’s available when the Knicks are on the clock for their second selection, he should be at the top of the board.

Grant Riller isn’t yet much of a household name outside of draft circles. In fact, he doesn’t even make the first-round cut in many mock drafts out there currently, but I expect that to change as the pre-draft process starts to heat up. Age, lack of explosiveness, and concerns about competition-level playing for College of Charleston have kept him low until now, but at a certain point, his scoring versatility off the dribble and ability to get to the rim are going to be too hard to ignore.

While Riller is wired as a scorer, he’s a willing and capable passer, especially on the break, where he keeps his eyes up and tries to push the pace. Like Terry, he’s already very crafty relocated off-ball and plays with active hands on defense as well as chasing after rebounds. He’s also shown a great drive-and-kick ability playing alongside a floor-spacing big and has experience in two-guard lineups, which is necessary for anyone playing off Barrett.

But Riller’s biggest strength is his shotmaking off the dribble. He doesn’t have the prettiest form, but Riller can knock down deep threes with a hand in his face and, in college, had no problem getting to his spots and getting the ball up.

He also shares Terry’s lack of focus off-ball as a defender, losing shooters with regularity and getting beat backdoor far too often. He doesn’t have great discipline as a point of attack defender, where he also gets blown by too often. The biggest area of concern, though, is his somewhat rudimentary handle. For a guy who will make his living beating guys through craft and deception, his handle isn’t nearly as tight as you’d hope. He often gets out of control, leading to ugly turnovers.

Even with those flaws, Riller is absolutely worth a gamble. He’s one of the bigger upside plays in the later stages of the draft, and while he’ll never be Damian Lillard or C.J. McCollum (his shooting percentages are a notch or two below both guy’s college numbers), it’s hard not to see shades of McCollum in his crafty pull-up game, and in the similar career numbers between the three four-year mid-major guards: 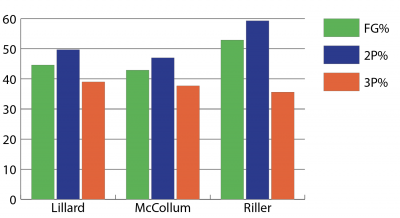 There’s a decent chance Tre Jones ends up being the best point guard on this list, if only as a super high-level backup point guard. Like his brother, Tyus, who plays for the Grizzlies, Jones is a winner through and through. After a freshman year that saw him effectively manage a floor with Zion Williamson, Barrett, and Cam Reddish, this year he took over the mantle of leader to great effect. He’s probably one of the two or three best point-guard defenders in this class, and while he’s not a passing savant on the level of Ball or Haliburton, he’s a quintessential floor general. He even managed to bump up his shooting numbers to a passable rate this season, though how real the stroke is remains to be seen (I’m still a little skeptical).

He also always seems to rise to the moment, as evidenced by his matchup against UNC’s Cole Anthony, which was maybe his best game of the season.

A relatively low floor and shooting concerns make him a less-than-perfect fit for the Knicks, but on a team that can develop him and let him play to his strengths (Miami comes to mind as a perfect system for his talents) he very well could blossom into a Fred VanVleet–style hybrid backup/spot starter at the point guard spot.

Devon Dotson seems cut straight from the cloth that gave us Jalen Brunson. Or is he more Frank Mason III? The 6’2″ guard is an absolute freight train going to the basket and has consistently improved as a playmaker and defender in his two years at Kansas, but the jump shot remains a major question mark.

One thing that isn’t a question is Dotson’s toughness and competitiveness. That said, he wasn’t as prolific a scorer at Kansas as his reputation might suggest, and he was prone to major bouts of inefficiency. He seems like a guy that will carve out a long career for himself but, like Jones, probably offers a little less upside than Terry or Riller barring a huge leap in his shot-making.

Nico Mannion came into this season with the most name recognition of anyone on this list, but his time at Arizona hurt his draft stock more than it helped.

Though Mannion does possess good instincts running the floor, which was discussed in depth by The Knicks Wall’s Eugene Rapay, his lack of size and burst, combined with a much worse-than-advertised outside shot, makes it unlikely he’ll ever be more than an average backup in the NBA.

While his reputation has kept him in the late-first round of most mock drafts, I wouldn’t be surprised if he slides to the early or even middle of the second round. Mannion has undeniable skills, and if he’s there when the Knicks pick in the second round, he’s worth a flyer—but in my opinion, using a first-round pick on him would seem to be a mistake.

For a team as historically starved for decent point guard play as the Knicks, this year’s crop of ball-handlers could be a major step in the right direction. Being able to surround Barrett and Robinson with shooters and playmakers would go a long way in helping stabilize the rest of the roster. Hopefully because of the amount of lower-ranked point guards available, Leon Rose and Scott Perry will have the ability to choose the best player available at the top of the draft, regardless of position, and fill out the point guard spot later if it’s still necessary.