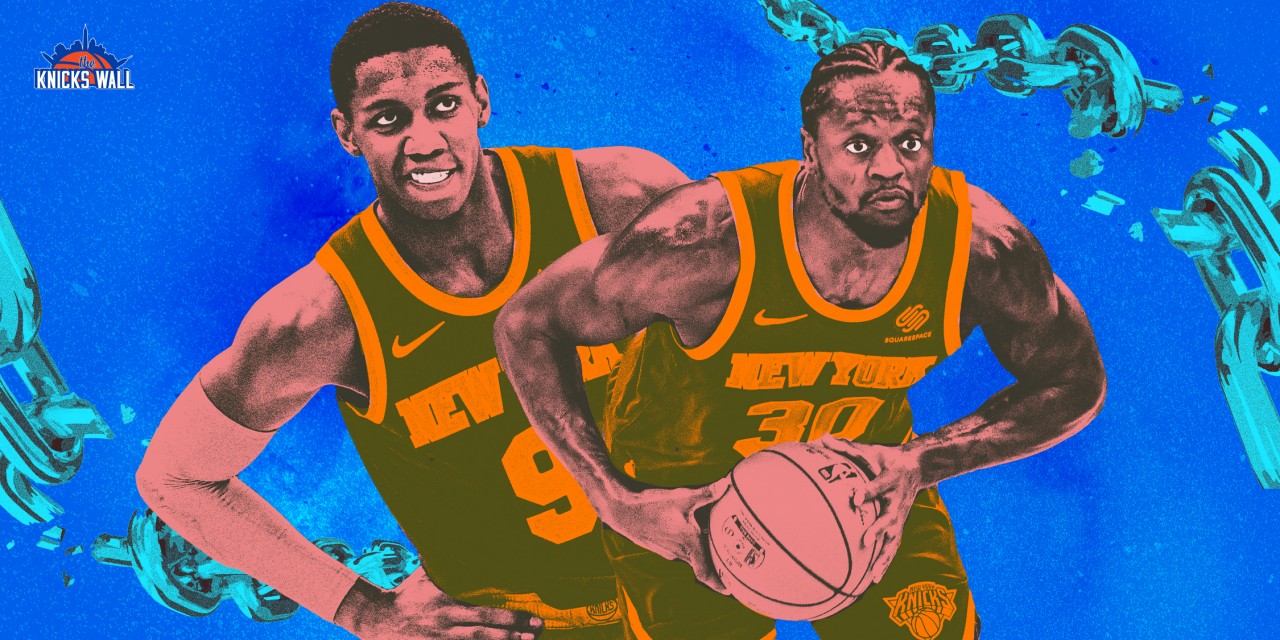 The Knicks’ two southpaws, RJ Barrett and Julius Randle, could benefit from fewer minutes together, especially the future outlook of the guard.

It’s tough to be negative about the New York Knicks these days. New York has a record of 8-8, sitting firmly in the play-in games through the first 22% of the season. After an initial scare, the young players are playing well with several sharing time together and offering a glimpse of what’s to come as they continue to develop. Head coach Tom Thibodeau has his warts, but he’s in the midst of creating an identity in New York—pushing players to play hard and remaining active on the defensive side of the ball.

In a season with very few expectations, the Knicks are soaring. With that, it’s tough to gripe about anything going on at the moment. Instead, we ponder about the future.


One area that raises plenty of questions is the development of 2019 third overall pick R.J. Barrett. To start the season, the second-year swingman has played well, averaging 17.8 points, 7.3 rebounds, and 3.5 assists while showing improved defense and baby steps as a playmaker. Just last night he recorded his single-game career-high in scoring with 28 points on 17 shots and five assists.

However, the same glaring weaknesses remain. The athleticism, specifically the wiggle when moving through traffic, remains concerning. The shooting remains woeful, with Barrett currently sporting a 49.0% True Shooting mark, submarined by 23.5% shooting from three-point range. His free throw shooting has improved to 75.3%, but it hasn’t translated to the outside yet.

The shooting is what will ultimately determine Barrett’s role on a good team. If he shoots, all the tools are there for him to be an effective two-way wing. If he remains a poor shooter, then he’ll have to lean on his ability to play in the post and thrive as a rebounder, playmaker, and defender to cover for his subpar jump shot. While he’s not a complete bust at the age of 20, we’re moving into a full season of data for Barrett, and more importantly, halfway through his rookie contract. How can the Knicks find a way to further unlock Barrett’s offensive game?

One idea could be to detach some of his minutes from Julius Randle to see what Barrett looks like with a similar usage rate, but around players who are better fits around him. So far this season, Randle has played the exact same number of minutes as Barrett: 593, so most of their minutes overlap this season. However, as the Knicks get healthy, they might have better talent to surround Barrett to help turn those numbers more positive.

The starling lineup and the math problem: The lack of shooting

Among New York’s current rotation, Barrett is tied for the second-highest usage rate on the team at 23.6%, tied with Elfrid Payton. The usage and getting his shot attempts and touches isn’t the issue; rather, the lineups he has played with early. Look no further than the starting lineup.

According to NBA.com’s stats page, the most used lineup consists of Barrett, Randle, Payton, Reggie Bullock, and Mitchell Robinson with 239 minutes—the only five-man lineup that has seen more than 100 minutes on the floor for New York. The lineup often draws ire, due to the lack of consistent shooting. Despite being a lynchpin in New York’s early-season success, the results have been poor on the offense end (102.3 ORtg) while great on defense (95.6 DRtg).

The math problem has been a consistent issue for the Knicks all season, as teams are taking more and more threes, while New York has remained hovering around 30 attempts per game (27.2) and 30th—dead last—in the league in three-point rate. At the time of this writing, Randle is the only player shooting over 35 percent from the outside, with Robinson neglecting to shoot one over the first 16 games of the season (Ed. note: Reggie Bullock’s hot night in the Bay Area crept his average to 35.3). The result has been a clunky offense that gets mucked up on the floor by both teammates and opposing defenders clogging the paint.

As the season continues and more lineups earn minutes, several ideas make sense: Playing Immanuel Quickley among the starting lineups over Payton; playing another shooter like Kevin Knox or Alec Burks to balance out the shooting over Bullock; and finally, lineups that can adequately use Randle and Barrett as offensive hubs with shooting around them and Robinson behind.

If Thibodeau agrees to place Barrett around players who better amplify his skill set, the Knicks have plenty of options. Two players of interest are rookies Immanuel Quickley and Obi Toppin.

Quickley at this point is well-known: The neophyte has impressed quickly, averaging 9.6 points, 2.5 assists, and 33.3% shooting from three. Unlike Payton, Quickley has flashed the ability to run the offense, but also an elite floater in the middle of the floor. While his three-point shooting isn’t elite, he’s a solid shooter who can make the right plays on both sides of the ball as a makeshift point guard.

As for Toppin, the intrigue is his skill set. Through his first few games, Toppin has shown that he’s willing to shoot from the outside. His shot chart looks more like a wing player than a rim-running big man. With 48.3% of his shots coming from the outside, Toppin could very well become a MoreyBall big—someone who is capable of knocking down corner threes and getting good looks at the rim, thanks to his athleticism.

What makes Barrett-Quickley-Toppin an intriguing trio is their skill sets blend. Quickley can properly handle the ball, but can also work off-ball as a catch-and-shoot and secondary threat. Toppin’s shooting offers more spacing around the rim, but his passing makes for Barrett to work as a cutter, his rim-running offers Barrett a high-level athlete to create shots above the rim, and Toppin is often found away from the rim on possessions.

The other two players will matter in time; someone like Robinson makes sense as a last-line-of-defense center and Kevin Knox as another shooter who offers stretch. The biggest concern will be the defense, but as New York switches from playing the veterans to the kids, the trio of Barrett-Toppin-Quickley could be a fun one to watch.

The biggest reason why the Knicks should begin to stagger Barrett minutes from Randle is that they both patrol the same position. Barrett being a power forward isn’t a negative, as one subcategory of “power forwards” in the modern game is the “big wing”—tall or sturdy wing players who can handle the work in the post.

Because of that, the Randle/Barrett combination just doesn’t work. When playing alongside Randle, Barrett is reduced to a catch-and-shoot role who also works off of dribble handoffs to slash. It works sometimes, as Barrett can get downhill when attacking the rim. Throw in Payton and it absorbs some of Barrett’s creation ability—moving Payton off the ball only offers a poor catch-and-shoot option.

Then add Robinson, a rim-running big man who only steps away from the rim to set screens and then roll to the rim, and you have a cluster of Knicks players – Barrett, Robinson, and Payton – in the same vicinity with similar scoring radiuses.

The New York Knicks have played well and continue to impress as the younger players continue to develop and the coaching staff work on creating a culture build on defense and hard work. There isn’t much to complain about, but there are certain things to ponder. Calling Barrett a power forward is both because of his skill set, the players he’s currently best at defending, and what type of players you want alongside him on the floor. Much like Randle, you want a big man who can defend the rim around him, but after that, the other three remaining spots should be flanked with shooters.

Barrett has made strides as a player and continues to impress as a defender, playmaker, and driver. The issue, however, is how to improve his shooting, as well as validate his role as a top offensive threat on a good team. Those two things go hand-in-hand.

To figure out what Barrett’s long-term future is, the Knicks should consider is playing him in lineups without Julius Randle and swap him for players who can not only shoot but offer a better fit alongside him. Not only may that help him continue to develop and improve as an offensive threat, but could also find Barrett as a much better player in the future.