Kristaps Porzingis has grabbed all of the headlines, but Courtney Lee has been an understated aspect of New York’s recent success.

When you think of successful rebuilds in sports, they all tend to have three things in common. The team always has a bona fide superstar at the helm. The front office is able to nail at least one pick in the draft. Finally, they secure a prominent veteran who serves as a quiet but assertive (sometimes aggressive) factor along the way. Where the Knicks are right now, they are in decent shape for the long haul. Despite their brass emphasizing that the focus is on youth, we started out the season seeing the old guys Ramon Sessions and Jarrett Jack get a nice bulk of time as ball distributors. But the true veteran presence that has become— and will continue to be — a trusted mainstay for the Kristaps Porzingis era is Courtney Lee.

The league has nearly fully shifted away from position basketball. There are no hard lines on what positions a player can play based on their height or size. This season, we’re seeing Jeff Hornacek routinely implement that to be able to compete with the game’s evolution. While he’s the main guy that is tasked night in and night out to guard opponents’ premiere wing, Lee is seeing less time on the wing offensively. Coach Hornacek has opted to roll with what is essentially a three-guard lineup keeping Lee at the 2. It has allowed Lee to be more active in the offense and put his offensive skills at the forefront.

We’ve covered Lee’s defensive prowess in depth here several times. The reality is when a player has a high I.Q. on defense — that is, he can anticipate passing lanes and plug holes in a team’s most vulnerable spots — that doesn’t change season to season. Lee’s defense has often been the Knicks’ saving grace when dealing with such offensive behemoths like LeBron James and James Harden. What’s making a big difference with how the Knicks are moving now is Lee’s offensive output.

Although KP is dropping 30 or more points every time the Knicks take the floor, it shouldn’t come as a surprise that currently, the squad is towards the bottom half of the league in points per game. They’re averaging just 105 points, primarily due to the groggy early season play of Tim Hardaway Jr. However, while we waited patiently for Junior to start unloading his clip, it was Courtney Lee who was a steady stream of buckets.

Lee is notching nearly 47 percent of his points from long distance with 86 percent coming off assists. The game versus the Nuggets was one of those starts where Lee came out shooting with such smoothness. It’s very easy to hit shots like this when your teammates know you won’t hesitate to take the shot:

Again, on an assist from Jack, you see Lee step right into the shot out of transition. As a veteran, Courtney saw the wide open set-up there off the turnover and knew where to be in order to get the easy look. These are the shots that we were used to ‘Melo taking. While Lee is not a volume scorer and doesn’t seek to play that role, he’s seamlessly stepped into a capable position as a hybrid 2/3 player. He no longer passes up good shots because he doesn’t have to:

His offensive rating through nine games is 102.9 with a effective field-goal percentage of 50 percent. Lee has been more aggressive with the ball in his hands than Knicks fans likely perceived him to be when he signed. Not only has his three-point shooting improved (up a whole percentage point), but he’s having an impact from mid-range at a higher rate too: (via BBall-Ref) 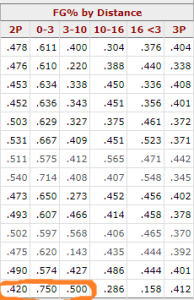 One of the larger questions about this team heading into the season was where the scoring would come from after KP. With a young core in KP, Hardaway Jr., and not-sure-what-he-is-yet rook Frank Ntilikina, there had to be a guy who would pick up the slack on those lowly nights. Fortunately, no one expected KP to coming out firing like this. What I think is critical is how Courtney Lee has again proven himself to be a reliable co-captain on this unpredictable journey towards a team to stay excited about.

Without a ball-stopper, the Knicks appear to be playing at a faster and more fluid pace. They’re also getting their best shooters the ball without burning time off the clock or forcing the shooter into a bad shot. Lee finished October averaging 11 points per game. Beyond being arguably the Knicks’ best overall defender, he’s dispatched to shoulder the scoring load with KP and THJ. Hornacek has utilized him as a scorer on the floor, pairing him with willing distributors like Jarrett Jack and Kyle O’Quinn. I think this is a large reason why the team just seems to be playing at a higher level of intensity.

Looking at how the team is constructed, it’s actually a perfect situation for Lee. He’s one of the most underrated shooters from outside and will give you high energy minutes. Lee’s stats don’t jump out in a crowded group of 2 guards, but part of that is because he lacks the finesse to be a 15 and 7 guy. Despite the perception, the league needs guys like Courtney Lee. Proper rebuilds require a veteran like him. His influence in the Knicks’ offensive scheme this season can’t be taken for granted. If the league had an award for Mr. Reliable, Lee would surely be a top nominee every year.

The Drastic Shift in the Perception of the Knicks