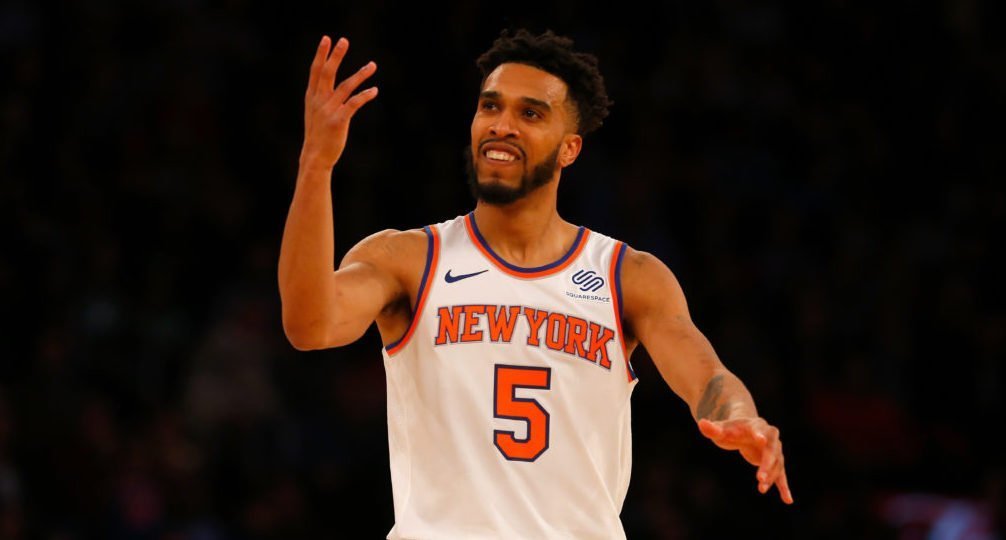 The Knicks’ veteran swingman Courtney Lee has detoured to the G League to get his game up to speed after a neck injury derailed his first quarter of the season.

Courtney Lee, the New York Knicks’ longest tenured shooting guard, is looking to make a comeback—albeit in an unorthodox way. If their recent play is telling, the Knicks’ backcourt misses his old self much more than the post–neck injury variant.

The injury happened during a training camp practice and sidelined him before preseason began. Lee summed it up by saying it was equivalent to whiplash, and after aggravating it sometime near the end of his rehabilitation period, he knew the path back to full strength wouldn’t be straightforward (via NorthJersey).

On December 10th, it was announced he was assigned to the Westchester Knicks.

Lee’s perspective of the G League is a progressive, positive one, far from the stigma that’s been associated with it. The San Antonio Spurs used their G League affiliate Austin Spurs to rehabilitate guard Tony Parker (via mySA). Parker was an integral part of the Spurs, and properly getting him up to speed was of the utmost importance. Fears of it being a ‘demotion’ are quieted once normalcy returns. Hopefully, Lee can find the same sense of stability once it returns.

In fact, going to Westchester was his idea. “It’ll probably take a couple of weeks to get back, get a rhythm, and feel chemistry with the guys,” Lee told the NY Post.

Lee’s veteran leadership couldn’t alter the G League team’s destiny, as he shot 7-of-21 from the field in their third loss in a row. Apart from the 1-of-9 three-point shooting, Lee’s on-ball defense was average, but his help defense and pick-and-roll defense was lacking. In his 31 minutes of playing time his conditioning was unsurprisingly lackluster. Like an out of shape 33-year-old, Lee didn’t appear nearly as spry or NBA-ready as Westchester star John Jenkins, although he had an off night himself.

It appears he’s still not all the way there yet, but flashes of what the Knicks have been missing on offense are integral parts of his game. A steady, even-keeled player, Lee dished three assists and grabbed seven boards in the game.

However, his leadership qualities haven’t translated to much this season at Madison Square Garden.

After being deemed healthy enough to play for the team on December 1st, Lee has appeared in four games and averaged 10.6 minutes. In the brief minutes he’s played, Lee averaged 3.5 points, 2.3 rebounds, and 1.5 assists per game. The piss-poor play prompting him to adjust is a good sign of leadership.

Lee was with the team in their loss to Cleveland, but he didn’t play a minute in the loss. Although he’s struggled, Lee may be just what the Knicks are missing. Their defense on perimeter players has been horrendous, even though most of the Knicks who take the court seem more than willing defenders. Statistically, they’re 23rd in Offensive Rating and 29th in Defensive Rating, and lost to the Cavs who had the 22nd-ranked offense and the 30th-ranked defense. Adding Lee to the backcourt wouldn’t hurt.

Courtney Lee is an 11-year veteran and rumors have been swirling for some time now that the Knicks would like to trade the remaining years on his contract for a player with an expiring contract. Clearly, the Knicks would need to showcase his upside before trading him for anything of value. The trade deadline is marked for February 7th at 3:00 p.m. (per NBA). New York has until then to make a move.