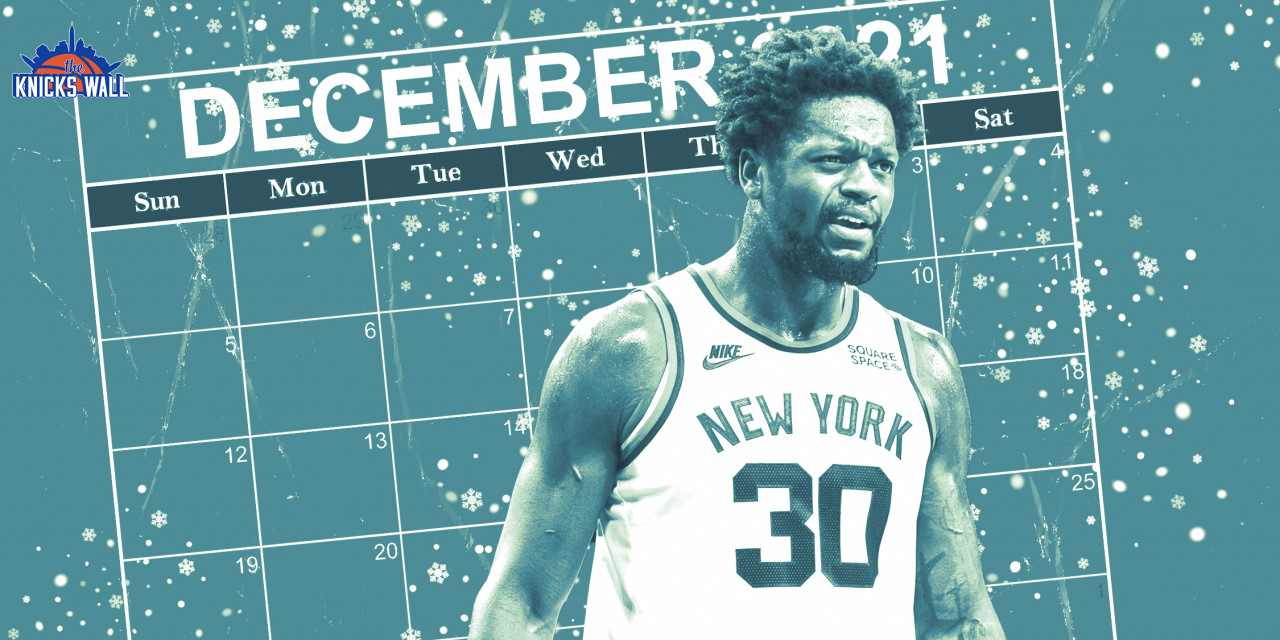 The most important month of the regular season for the Knicks is here. How do they fare in their 14 remaining games?

As the weather gets colder here in the Big Apple, the sense of urgency grows stronger for the New York Knicks, who currently are 11-11 a little over a quarter of the way through the NBA season. December could be a make-or-break month for the ‘Bockers, who have a chance to enter 2022 with some momentum or, on the other hand, find themselves in a tailspin, depending on their results in these final 15 games of the calendar year.

Thus far this season, many would characterize the Knicks’ overall performance as average, indicated by their .500 record. After a hot start, winning five of their first six games, they have struggled, going 6-10 in their last 16 games and have just not brought the same defensive intensity as we saw last season, where they allowed the fewest points per game of any team, per NBA Stats, at 104.7. This season, Tom Thibodeau and co. are 18th in points allowed and seem to be leaking on that end of the floor.

Offensively, New York did a good job of bringing in more talent in that department, but some of those acquisitions have been disappointing, specifically with Kemba Walker, who as we all know is no longer in Thibs’ rotation and Evan Fournier has been hit or miss. Top gun Julius Randle has been solid, but his numbers are slightly down from last year and RJ Barrett, who most fans thought would take another leap in year three, has played poorly.

This has all netted out to a pedestrian first 22 games for the orange and blue.

New York’s December schedule is a mix of formidable teams and some teams who are already looking ahead to the lottery. The Knicks have shown this season that they are capable of beating top-tier teams like the Bulls and Bucks, but unfortunately also capable of a letdown, losing two out of three matchups to the lowly Magic and playing the Rockets and Pelicans a little too close for comfort in victory.

The current Knicks’ December record sits at 0-1 after a tough loss at home to the Bulls last night. The Knicks looked flustered at the beginning of the game and didn’t compete defensively as well as you would have expected. The second-half comeback was encouraging, but at the end of the day, a loss to the Bulls isn’t something that should be a shock, as Chicago is simply a more talented team.

In terms of the good, playoff-caliber teams the Knicks play over the next month, by far their toughest challenges are going to be the Warriors and Bucks, fortunately at home. The Warriors are looking to be in dynasty form yet again, with Stephen Curry leading the charge. The defending champion Bucks, who got off to a rocky start, have won eight of their last nine games and look like one of the best teams in the NBA again.

Teams like the Nuggets, Celtics, and Hawks all have immensely talented players but have underachieved this season. The Nuggets have been struggling with the injury bug, losing Michael Porter Jr. to back surgery, and have been without Jamal Murray, who is recovering from a knee injury. Nikola Jokic has been MVP-level this season and the Knicks have lost their last seven to Denver, dating back to 2018, per Land of Basketball.

The Celtics and Hawks games will always be tough for the Knicks given the fact that these are viewed as rivalry games, with the Hawks rivalry germinating during last year’s playoffs. Both Boston and Atlanta are slightly over .500 but have stars in Trae Young, Jayson Tatum, and Jaylen Brown that could make life difficult for the Knicks.

As for the Wolves and Wizards, both teams were horrendous last year, but have been surprisingly good this season. Minnesota is an exciting young team headlined by former first-overall pick Anthony Edwards, who is an absolutely special talent. Washington is one of the surprises in the league, posting a 14-8 record thus far after trading away Russell Westbrook in favor of solid veteran role players.

Prediction vs. The Good: 3-4. The Knicks will lose to both the Warriors and Bucks and drop a game at the Timberwolves off of an emotional Christmas Day win against the Hawks. The Knicks’ other loss comes this Saturday against the Nuggets, a team that has given the Knicks trouble.

As mentioned previously, the Knicks have had a propensity this season for disappointments and it cannot be assumed that they will sweep all of the above bad teams. The Knicks have already lost to the Raptors, Pacers, and played the Rockets tightly.

In terms of the awful teams on the docket for December, the Pistons (4-18), Rockets (5-16), and Thunder (6-16 and just lost by 73 points) set themselves apart in this bunch and are likely more concerned about their lottery ping-pong balls as opposed to winning games.

The Spurs, Pacers, and Raptors are more well-equipped than the other bad teams on this list, but San Antonio just doesn’t scare you at all anymore, even with Gregg Popovich at the helm. Toronto, also well-coached, is rebuilding and Indiana doesn’t have a roster about which anyone should write home.

Prediction vs. The Bad: 5-2. I could definitely envision the Knicks falling in Indiana on the second night of a back-t0-back. Also, I believe that given the fact that the Knicks have shown to play down to competition this season, another loss could realistically be mixed in there.

Overall, that brings my prediction to 8-6 in the final 14 games of December, equating to 8-7 over the final month of 2021. 8-7 is about the pace the Knicks have been going this season and they have given me no indication that they will be taking off anytime soon, given their recent play. On the flip side, I do think this schedule isn’t necessarily a murderers’ row and there isn’t a high likelihood that they completely fall off the face of the earth.

We will see what happens over the next 28 days, but hopefully, this stretch of games is a positive turning point for the Knicks.