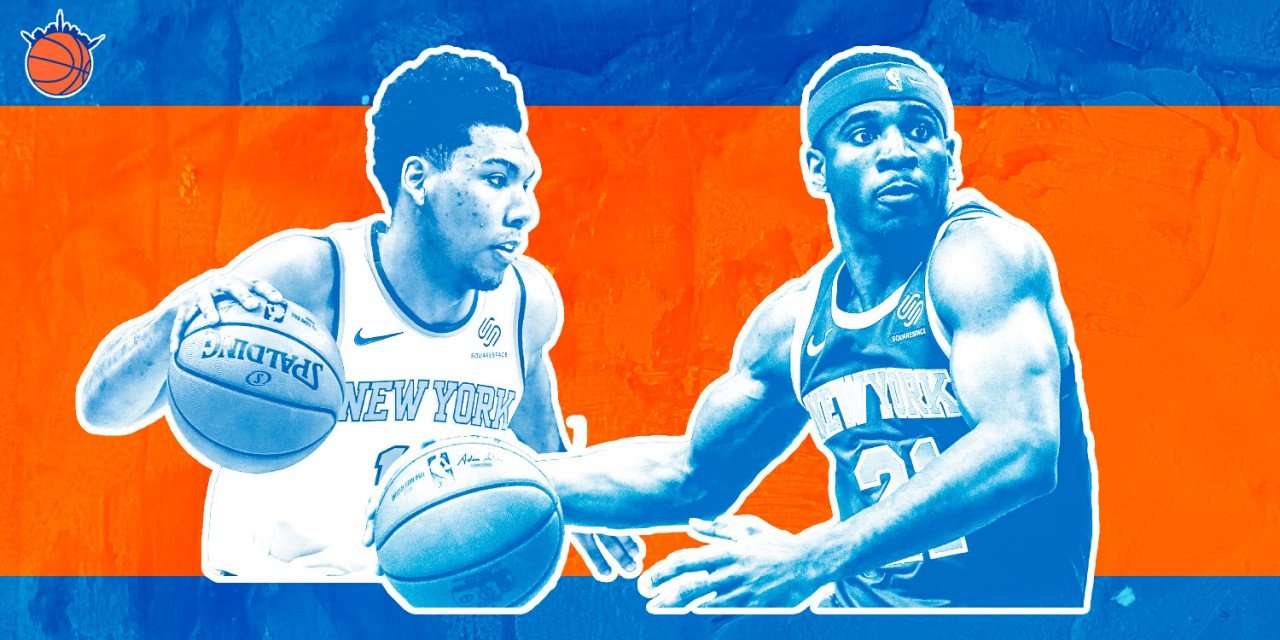 The New York Knicks’ rotation continues to be a point of contention as we move out of the summer and closer to the looming preseason.

Between the rookies and their play at Summer League, the expansion of forwards signed this summer, and the small point-guard debate, the majority of the roster heads into the 2019–20 regular season fighting for a spot in David Fizdale’s rotation.

The competition doesn’t stop at the shooting guard position, where the new faces in town⁠—Wayne Ellington, Reggie Bullock, and third overall pick R.J. Barrett⁠—could create an uphill climb for the likes of incumbent guards Allonzo Trier and Damyean Dotson.

Before the start of the offseason, Trier and Dotson were viewed as cheap depth for a potential star-studded Knicks dream team. Both players under the age of 25, on team-friendly contracts, and add a handful of skills to the team’s rotation.

Six weeks and various free agents later, the Knicks added two shooting guards, drafted a third wing player, and made Trier and Dotson’s position on the roster a question mark.

In New York’s offseason Plan B, the goal was to improve outside shooting after a terrible season from beyond the arc. The result was the addition of Wayne Ellington and Reggie Bullock, two wing players who do nothing but launch threes. Even with Bullock currently on the mend with an injury, both players project to be valuable rotation pieces.

It also creates a large question mark in the backcourt for the Knicks, at least for the start of the season.

We’ve already touched upon Trier’s solid rookie season, and he’s talked about focus heading into year two. The two areas he needs to improve are his defensive ability and shot selection. Both were questionable at best in his first NBA season and will need to be more established heading into his second.

Dotson, however, is a trickier fit. From his rookie to sophomore campaign, Dotson made step forward as a scorer, going from 4.1 points to 10.7 per game. More importantly, Dotson took a moderate step forward as an on-ball defender, and became a solid shooter, knocking down 36.8% of his 342 triple attempts.

Still, Dotson feels like a “jack of all trades, master of none” kind of player. On a team with stars, you can use that player as the fourth or fifth starter. On a team with no clear star and several players all within the same talent range, though, those guys tend to be undervalued and cast aside in favor of players who do one thing really well.

In a way, the combination of Dotson and Trier gives New York the best of both worlds. Trier is a much better scorer, while Dotson offers better defense and shooting.

Between Barrett, Bullock, and Ellington, the early season rotation seems stocked in the backcourt. Still, New York should keep both Trier and Dotson in the mind’s eye. Dotson is the best option to jump into the starting lineup, as his balanced play would serve most of New York’s lineups.

DOTSON IS ELITE 6-6 from three ??? pic.twitter.com/YXYhMxRoa9

Trier, on the other hand, offers excellent scoring off the bench. New York could cover his defensive woes with players like Elfrid Payton alongside him, and guys like Taj Gibson and Mitchell Robinson behind him⁠—maximize his strengths and limit his weaknesses.

Dotson and Trier’s contract situations should tip their scales in their favor, too.

Both Trier and Dotson are restricted free agents after this season, meaning the Knicks control both of their rights. With Bullock and Ellington likely one-year hold-over options, re-signing Dotson and Trier to team-friendly deals should be considered, giving the Knicks solid value as they look toward star-studded free agents over the next two years.

With New York’s rotation in flux and nine players added to the roster this summer, the Knicks could find themselves with an intense preseason, as players look to secure their spot in the rotation.

And with three guards added this summer, the futures of Allonzo Trier and Damyean Dotson have become murky at best. Both offer a solid skill each, and the ability to sign them long-term should provide plenty of run for the Knicks.

The question is: How much run? Between the free agency additions and the arrival of Barrett to the scene, Dotson and Trier could find their spot in Fizdale’s rotation in question, at least at the beginning of the season.

»READ: Allonzo Trier is “harnessing” his three-point shot in the offseason for the Knicks