Can Damyean Dotson Grow Into a Danny Green Role for the Knicks? 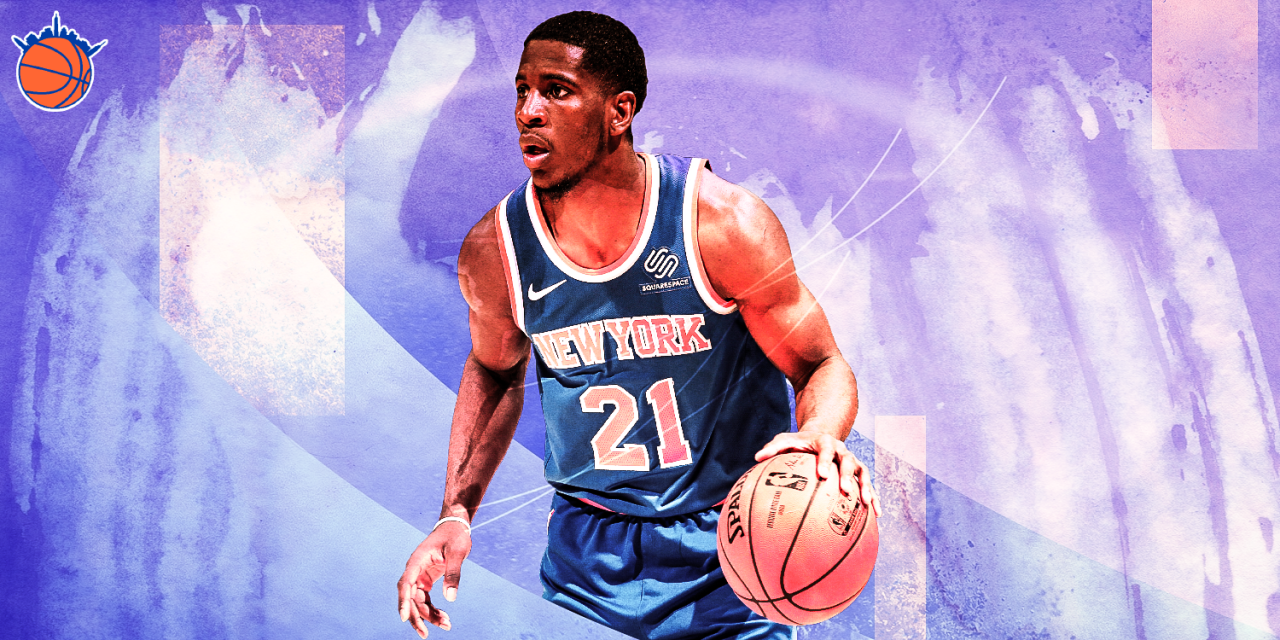 Damyean Dotson is not quite young core, not quite aged vet for the Knicks. His skill set and arrival into the league is reminiscent of the now-Raptor Danny Green.

It’s difficult for a team to hit a home run with its second-round picks. Often, those selections are made without an actual plan on how to integrate that player into the franchise long-term. Those players are less likely considered as a project and take a backseat to the prized first rounders.

Damyean Dotson had just turned 23 years old the month prior to the Knicks drafting him in the 44th slot. In expected fashion, the 6-foot-6 swingman was mostly tucked away in the big team’s developmental squad, in Westchester, as a rookie. For the DubKnicks, Dotson showcased his high-flying athleticism and improved his shooting I.Q. Today, Dotson is seizing the moments as an occasional starter while positioning himself as a legitimate role player.

Watching Dotson on the floor, particularly when he’s on the wing (88 percent of the time this season), you get the glimpses of a few namely players; former Spur-turned-Raptor Danny Green and a familiar face to the Knicks, Trevor Ariza. Though Danny Green has been traditionally utilized as a 2 guard in San Antonio and Toronto, he and Dotson share some specific similarities, both in patterns of their two-way ability as well as their journeys to starter minutes in the NBA.

Like Green, Dotson took some time to find his offense at the college level. After playing in 70 games for the University of Oregon, Dotson’s future as an amateur-turned-pro was threatened with allegations of sexual assault. Charges were never filed; however, Oregon took swift action by removing Dotson and his teammates from the team. He was banned from campus. No matter how good of an athlete he is, those stories weigh heavily on the minds of front office leaders.

In spite of his tumultuous tenure at Oregon, Dotson received a second chance when he transferred to the University of Houston. With former coaches and John Lucas singing Dotson’s praise, the Knicks decided to ignore Dotson’s past.

On the court, Dotson’s talent as a catch-and-shoot guy with tight handles is what immediately grabs your attention. Watching Dotson average 18 points per game while shooting 39 percent last season in Westchester was very reminiscent of the Danny Green’s dominance with the Austin Spurs, before performances that led to the San Antonio Spurs’ dominance in the Western Conference. But the comparison doesn’t end with sharpshooting.

Defensively, we have seen Green transform from an average defender on the wing to finishing with a top Defensive Rating (ninth in 2015–16) and earning a spot on the NBA’s Second Team All-Defense squad in 2016. The area that helps to project Dotson’s place in the Knicks’ future is unlocking and refining his position as a man-to-man defender. Though the sample size is too small to make a dent, Dotson has made several deflection this season, showing he can disrupt in the middle and give the Knicks an edge defensively (like Green has) in those teeth-clenching fourth quarters—which haven’t been pretty for the ‘Bockers this season.

Doing a little side-by-side comparison based on age, Dotson and Green’s trends are hard to ignore at both the individual and team level. Among all shooting guards this season, Dotson is averaging 3.7 boards to Green’s 4.3. Regarding steals, they have close to the same rates. The difference is simply minutes.

As with other Knicks discussed previously, it’s tough to gauge just how good Dotson is—and how influential he can be without consistency. Nevertheless, there’s enough evidence to support an educated guess on how Dotson should fit in with the Knicks going forward.

Dot is an important cog for the Knicks’ bench unit. The bench is currently averaging 43.4 points per game, with #WholeTeam being in the top 10 of lineups. In 93:43 minutes played, Dotson’s contributions are best suited when he’s on the floor with Frank Ntilikina, Tim Hardaway Jr., Noah Vonleh, and Mitchell Robinson. That’s a lot of length on the court!

Oftentimes, this lineup may suffer for a lack of offense. But what’s exciting is how this group of guys opts to attack the rim and draw fouls. Dotson’s propensity as a catch-and-shoot threat is perfect next to a ball distributor like Ntilikina. Additionally, this season THJ often demands a double on his baseline attacks, allowing Dotson clean looks like this.

For the last two months, David Fizdale seems to have Dotson settled with minutes. He’s averaging 24.3 minutes per game for the month of January, shooting 38.3 overall. It’s hard to judge how much attention Fizdale is putting into Dot specifically—but as an individual, Dotson remains committed to his own development.

Dotson commented on how he’s remained ready for a bigger role, per NorthJersey:

“When you’re not playing, work out like you’re playing. So if you didn’t play last night, come in and get at least a 25-, 30-minute workout hard, get the shots you’ll get in the game, try to get a good sweat.”

Dotson’s body of work incorporates grit, effort, and a teachable disposition that is begging to be developed.

That type of work ethic significantly paid off for Danny Green. We watched Green become a household name after the insane streak of three-balls during the 2012–13 Finals run. What sparked that? Gregg Popovich entrusted Green as a starter for 80 games, a significant increase from the 38 starts the previous season.

Fiz ain’t Pop. We actually have no real record of Fiz developing a player, unless you want to count Mudiay this season. We have to be patient.

Fan should give the Knicks’ brass a full season to show and prove on the promise of development. Without KP, this should have been easy to do. Fizdale deserves (some) credit for giving guys opportunities to step up. Dotson has answered the call multiple times. Sometimes it’s buckets. Sometimes it’s making a defensive impact.

Damyean Dotson falls into a weird category of NBA players. Second-round impact players like Danny Green and the Knicks’ 2004 second-round pick Trevor Ariza are more the exceptions than the rules. If you look at the careers of these two, their development and longevity as starters have been closely related to the commitment of developing weaknesses from their coaches and the respective front offices.

The Knicks, unfortunately, didn’t hang on to Ariza long enough to see what a steal he was. In fact, contrasted with Green’s career with the Spurs, Ariza serves as a cautionary tale for the squad about what can happen if you don’t give sound second-round picks a chance to flesh out their game.

Ariza’s slow build as a two-way starter is illustrative of what Dotson could accomplish. By the time Ariza was 24, he had finessed his skills into starting for the Houston Rockets. Ariza has thrived mostly as a catch-and-shoot guy as well, with 93.2 percent of his career threes coming off assists. He moves well without the ball and he’s benefited playing alongside guards like Chris Paul, Aaron Brooks, and Patrick Beverley. Defensively, Ariza lays the groundwork for Dotson’s ceiling with his ability to read telegraphed passes all over the court. Ariza has consistently been among the league’s best in steals per game and forcing turnovers. With time, Dotson can become a pesky defender for all five positions.

Dotson is a young(ish) player whose experience is a long-term bonus for the Knicks’ rebuilding phase. Aside from signing him to a longer deal, we haven’t heard anything convincing from Fiz about Dotson’ status in New York. And unlike Ariza (who was drafted at 19), few teams give older players time to put it all together.

The question isn’t whether Dotson can be a starter or not. Several teams have already taken notice as we enter the period of trade rumors. The question is whether or not the powers that be honor #WholeTeam’s body of work enough to nurture what’s there and push him to that next level.