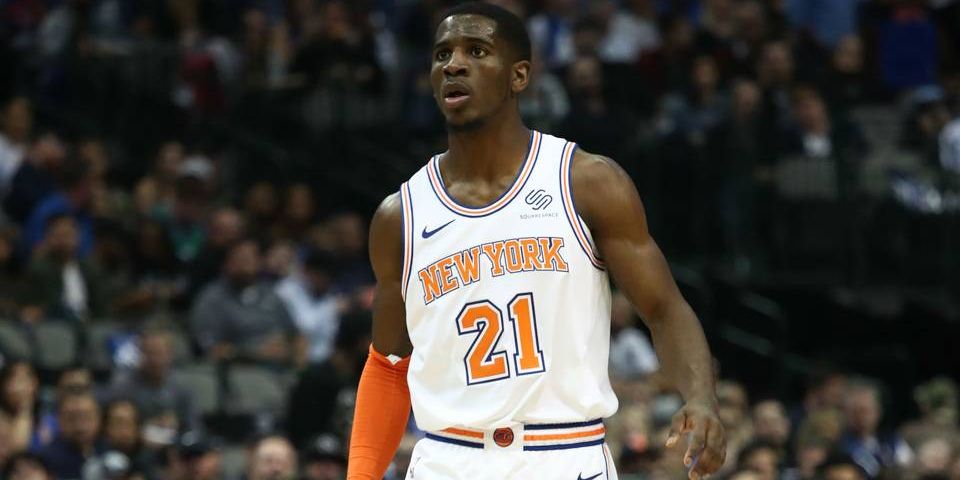 Damyean Dotson’s calm, cool, and collected performance has been eschewed with muddied rotations from Knicks head coach David Fizdale—and he deserves a fair shake on the hardwood.

It looked as if Damyean Dotson had finally found his footing. Following a rookie season where he spent more time glued to the end of the bench or up in Westchester, Dotson was being given the proper shine he should’ve received months ago.

His sophomore season initially felt like déjà vu. He kicked off the season with a pair DNPs. David Fizdale (thankfully) did not wait long before he set Dot free. By the third game of the season Dotson started to see minutes. He reached double digits in scoring in all three appearances off the bench. Against Miami in particular, he showed out with 20 points and 10 rebounds in a then season-high 35 minutes.

That performance captured every reason Dotson should be in the thick of the rotation. He is the prototype for a modern 3-and-D guy. He doesn’t need the ball to be effective—all three of his three-point makes were catch-and-shoots, and his defense is among the best on the roster.

Fizdale promoted Dotson to the starting lineup after that South Beach showcase. In nine games as a starter, Dotson’s numbers were modest. He averaged 10.4 points and 4.7 rebounds, while shooting 42.9 percent from the field and 28.9 percent from three. The Knicks were 3-6 during that stretch.

Fizdale reshuffled the rotation following an inept 115-89 loss to the Magic, and Dotson was once again cast to the shadows. Déjà vu once again. Mario Hezonja was promoted to the starting lineup, which in effect cut Dotson out of the rotation altogether. The drastic change in minutes led to a few teams to inquire about Dotson’s availability.

What those teams see in Dotson is what we see every time he is on the floor. Dotson does not need the basketball in his hands to be successful.

A skill already useful in a vacuum heightens with context. Fizdale has opted for the ball dominant guards of Tim Hardaway Jr., Trey Burke, and Emmanuel Mudiay to ramp up the pace. Until Kristaps Porzingis returns that game plan is unlikely to alter much, which creates a greater need to flank those guards with 3-and-D type players.

Recently that 3-and-D guy has been the aforementioned Hezonja, and Vonleh has pushed his offense beyond the arc, with 3.2 three-point attempts since returning to starting lineup. Vonleh has earned every minute he’s received.

Let’s shift our energy towards Mario, whose defense has impressed Fizdale since being promoted. While Hezonja may be doing the “little things” at the moment, it pales in comparison to the job Dotson was able to do on Kawhi Leonard or Victor Oladipo.

Dotson has also been the superior offensive weapon. Hezonja has been a life-sized brick. As a starter, Mario is averaging 5.5 points, 3.0 rebounds, and 1.3 steals. He is shooting 33.3 percent from the floor, and an arctic 22.2 percent from three.

When you put the numbers side by side it doesn’t make a whole lot of sense how Hezonja’s stock could rise so suddenly while Dotson’s dips. The only credible answer could be size. The 6’8” Hezonja is better suited to deal with threes than Dotson, who at 6’6” has the size of a natural shooting guard.

Fizdale’s comments on Hezonja back this up:

“His size at that position has been helping us. But he really has been taking the challenge defensively for us. Every film session since he’s been starting, there’s four or five clips on the edit of him doing something really well defensively.”

That’s where the reasons end. Dotson is the superior option in every other measurement.

Dotson proved that much in his return to action after a four game hiatus. Against the Pistons he relieved Hezonja who was in foul trouble. In 23 minutes, Dotson scored 17 points, including a perfect 3-for-3 from deep. The very next night against the Sixers he totaled 16 points, four rebounds and three steals in another 23 minute stint.

Fizdale praised Dotson for his readiness:

“He stepped up big time. That’s what you call a pro. Keeping yourself ready and not let yourself get down and when your number is called, you go and produce. Dot’s a big-time pro. He’s a guy I really trust in.”

The hope is Dotson can parlay that trust into a cementing a consistent role. Fizdale has been tweaking the rotation like it’s DraftKings, and will continue to do so until that 25-game mark. What role Dotson ultimately fills can be up for debate. What cannot be debated is that Dot is someone who should be on the floor as much as possible. He is one of the few players on the roster that satisfy its short and long term goals.

Thus far Fizdale has been unable to stay true to some of the proclamations he made when he was hired. The personnel on hand plays a big role in the X’s and O’s, and creates challenges for the position-less dream. That’s out of Fiz’s control.

What is in his control is rewarding guys for strong work. He has said on many occasions that this team will be run as a meritocracy. Dotson is the embodiment of such a structure, and his role should reflect that. Right now Fizdale has a strong hold of his troops. But this is the NBA, and opinions can change quickly. Not rewarding someone like Dot can be a slippery slope. Rewarding him, on the other hand, only strengthens that foundation Fizdale has broke ground on.