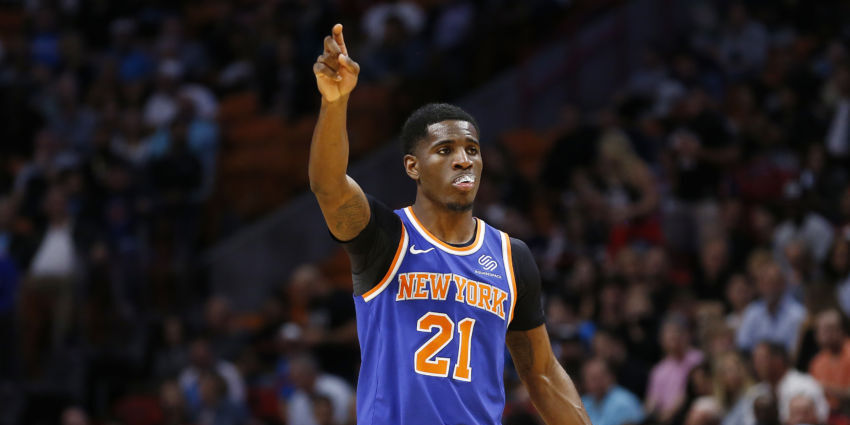 The Knicks are signing former second-round selection Damyean Dotson out of the G League following a coronavirus outbreak on their team and across several NBA franchises.

Dotson, 27, was a second-round pick by the Knicks in the 2017 NBA Draft, the last by team president Phil Jackson prior to the 13-time champion leaving the franchise. The Texas native averaged 7.8 points and 2.6 rebounds in 20.1 minutes per game in 165 games for New York between 2017 and 2020 before signing with the Cleveland Cavaliers in free agency in November of last year. Cleveland waived the 6-foot-5 shooting guard earlier this year, after which he played with the San Antonio Spurs’ G League affiliate.

The Knicks bring in Dotson after signing Westchester Knicks guard Tyler Hall—both to hardship exceptions, 10-day deals to maintain the minimum number of players available for the NBA to keep scheduled games afloat. New York is missing Obi Toppin, RJ Barrett, Quentin Grimes, Kevin Knox II, Immanuel Quickley, and Miles “Deuce” McBride due to COVID-19 health and safety protocols. Derrick Rose is a game-time decision after tweaking his ankle. Toppin could leave COVID protocols imminently, as it has been 10 days.

New York State reported its highest single-day number of cases of coronavirus just the other day. The Brooklyn Nets had a game postponed and saw James Harden, Kevin Durant, and Kyrie Irving enter protocols. It’s not just New York, though, as multiple NBA clubs are finding trouble fielding eight healthy players. Denver-Brooklyn, Cleveland-Atlanta, and New Orleans–Philadelphia were suspended yesterday while Orlando-Toronto today and Washington-Brooklyn tomorrow are all postponed. Multiple franchises are picking players out of the G League to augment their rosters.

Dotson averaged 12.9 points, 5.6 rebounds, and 3.9 assists per game in 12 appearances for the Austin Spurs this season, via RealGM.

The Knicks play their next three games at home through Christmas at The Garden against the Atlanta Hawks (as Trae Young tested positive for COVID-19), with no capped attendance announced by public health or government officials.