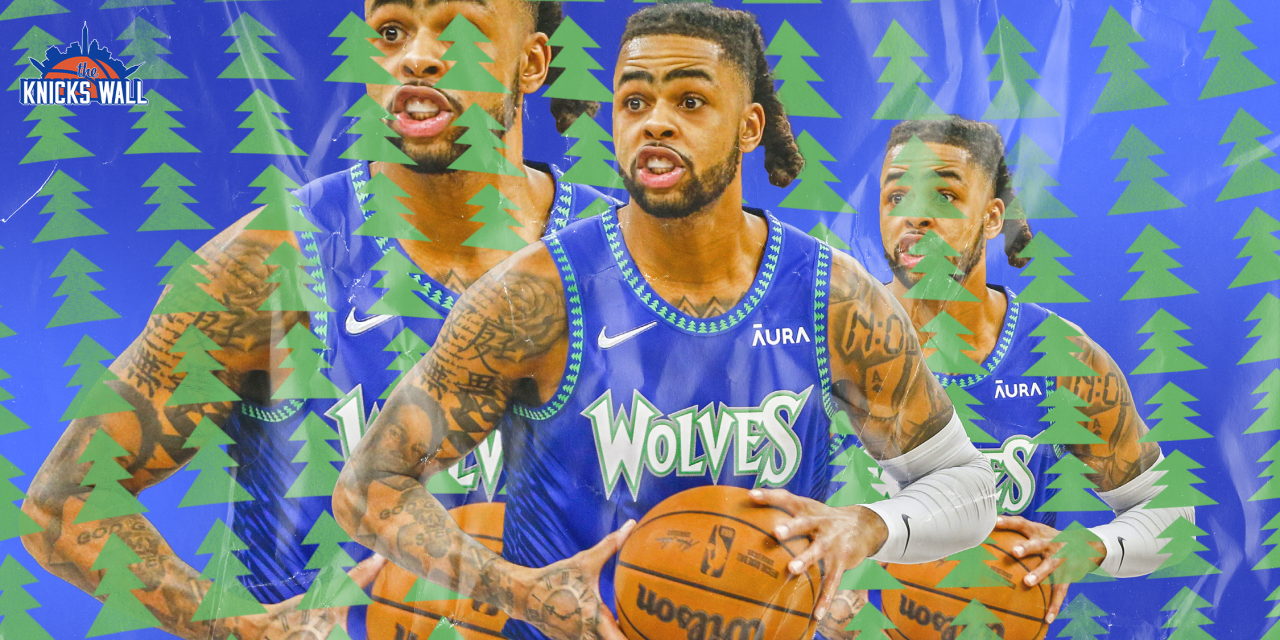 Timberwolves guard D’Angelo Russell could be on the move this offseason. With the Knicks in need of guard help, could the former All-Star be an answer?

Another point guard in the headlines, another connection to the New York Knicks. This time it’s Minnesota Timberwolves guard D’Angelo Russell, who, according to a report, will be shopped this summer. Russell is an interesting player and New York could be a potential landing spot. Coming off a solid season where he averaged 18.1 points and 7.1 assists a game, the highest dishing total of his seven-year career, Russell could be the missing floor general New York’s been desperately looking for.

The future of another prominent lefty lead guard in the West is much more uncertain after Minnesota’s first-round exit. D’Angelo Russell wound up on the bench at crunch time in the Timberwolves’ season-ending Game 6 defeat at home to Memphis and averaged just 12.0 points per game on 33.3% shooting in his second career playoff series. Numerous rival teams expect the Wolves to try to trade Russell this offseason irrespective of Russell’s close relationship with Minnesota star Karl-Anthony Towns. Russell, 26, has one season left on his contract at $31.4 million.

Though Russell had a good season and played in the most games he has since the 2018–19 season, an underwhelming playoff performance has Minnesota seemingly ready to move on. New York has already been connected to another Western Conference point guard, the Dallas Mavericks’ Jalen Brunson, who is due to be a free agent this summer. The Mavs are currently in a dog fight versus the Phoenix Suns in the second round of the NBA playoffs and Brunson has been a major catalyst in his team’s success, also holding the fort down in the first round against Utah with Luka Doncic hurt. Dallas might think twice about letting him walk this upcoming free-agency period.

If New York does go after either Brunson or Russell, it would cost them more than just money. The Knicks will have to give up draft capital and current players they might not be willing to part with for a player who might end up being a one-season rental in a deal with Russell, a free agent in 2023. However, with the combo guard on an impending expiring deal, New York could have some leverage and might not have to give up so much in a potential trade.

For Brunson, on the other hand, the Knicks’ front office might have to do some expert maneuvering for the veteran guard in a sign-and-trade deal with the Mavs—a move that would require moving current players and possibly other assets. Player transactions can be complicated especially when there are extra steps involved. Brunson’s father, Rick, is a former Knicks guard, a fact that could work in both parties’ favor.

The Knicks’ front office should be under no pressure to make any drastic moves this offseason. With a still-developing core, all moves need to be stable and aimed to complement the younger players, not trading them for another ill-fated quick fix or another clunky fit. D’Angelo Russell is a prime candidate for this. As a player with some recent extensive injury history, it could turn out bad for the Knicks. With their recent injury woes, especially at the point guard position with Derrick Rose and Kemba Walker this past season, New York cannot add a player they can’t rely on night in and night out. The point guard conversation is a always trending topic for the Knicks as they continue their search for a permanent solution. They may not have to look much longer or even go outside of the organization—with Immanuel Quickley already in the fold and a decent pick in a talented draft class, the Knicks could find their answer at no cost at all.

This point has been exhausting, but the Knicks are still a rebuilding team with a growing crop of good, young players. Disrupting that for a player that isn’t franchising changing is not worth the risk. The best decision New York can make is probably to stay the course for continuity purposes and not disrupt what they’ve built so far. D’Angelo Russell is a good player and on the right team he can help them compete but he is not the answer for the New York Knicks. It’s kind of hard to envision a trade for Russell because he doesn’t necessarily raise the team’s ceiling. With one year left on his current contract, he could easily depart next summer leaving New York with a new set of questions at the point guard spot all over again.

If New York is determined to add a dynamic player via trade, they should aim their sights higher. With the ever-circling rumors of Donovan Mitchell’s departure from the Jazz and his connection to New York, the Knicks would be wise to start their search there. Unlike a Russell or Brunson, an All-Star-caliber player like Mitchell raises New York’s expectations. He’d cost exponentially more than the other two guards mentioned, but New York instantly projects to be a playoff contender and presumably becomes more attractive to other players going forward.

The Knicks’ brain trust needs to understand there should not be any rush to make a splash move for marginal improvement this summer. The Eastern Conference is stacked with championship contenders, and New York isn’t one of them as a team still building right now. If, or when, the right star becomes available, the Knicks should pounce (like Mitchell), but right now the best possible and cost-effective answer is probably in-house as they continue to build.