Who are the assistants new Knicks head coach David Fizdale has begun assembling for his coaching staff?

Now that it’s been confirmed that Kurt Rambis won’t be making a miraculous return, I think it’s time for a brief moment of celebration over who the Knicks’ newest assistant coaches will be. Somehow, the latest Knicks regime of team president Steve Mills and general manager Scott Perry haven’t messed up yet. They’ve been meticulous with every aspect of the offseason and that is, I’ll say it, refreshing. The hiring of David Fizdale signaled a shift from Knicks past—we’re no longer playing favorites.

With that said, Fizdale has brought on some new and old names for his assistant coaches. Let’s take a look at how his staff is rounding out.

The player Keith Smart was on 10 different teams over the span of his career. In similar fashion, the coach Keith Smart will now be a coach for his seventh team. Smart is, without a doubt, the most experienced and battle-worn of Fizdale’s assistants. Smart will almost definitely become David Fizdale’s lead assistant, per Ian Begley of ESPN.

His first head coaching gig came in the 2002 season when he was slotted in as the interim head coach after John Lucas II was relieved of his duties. With 50 games remaining in the season, Smart went a cool 9–41 during his time as interim head coach. That following year, the Cavaliers drafted some nobody out of high school with the no. 1 overall pick. That player’s name was LeBron James. Whatever happened to that guy?

From 2003–10, Smart was an assistant coach for the Golden State Warriors and three different head coaches—Eric Musselman, Mike Montgomery, and Don Nelson. It’s rare that assistant coaches stick around through one coaching regime, let alone three. This should be a testament to Smart’s basketball mind and his ability to adapt to different systems.

Fun fact: Keith Smart coached Jeremy Lin, who backed up Stephen Curry before Lin went on to take over New York during Linsanity. The 53-year-old had two more seasons as head coach for the Sacramento Kings before joining the Miami Heat as an assistant coach. Smart owned a 93–170 record as a coach.

Unfortunately, Smart doesn’t have a polished record when it comes to his relationship with players. During his stint in Sacramento, DeMarcus Cousins was going through some growing pains. Per Matt Moore, then of CBSSports, Keith Smart was a disaster of a coach. “Smart’s decision-making has been called into question, and we aren’t just talking about his choice to play DeMarcus Cousins nine minutes on Friday night. It has worn heavily on both fans and players for some time and now the clock is ticking.” Moore continues by saying, “Smart consistently coaches to his opponent and rarely takes advantage of potential mismatches. He is a reactionary strategist and chronic dabbler. There is no set nine, 10 or even 11-man rotation 76 games into an 82-game schedule.” While being a strategist isn’t bad, Knicks fans should not be excited about the prospect of not having a set rotation—something that ex–head coach Jeff Hornacek also struggled with.

With years of experience on an NBA bench, Smart’s knowledge of the game becomes invaluable, regardless of his history. Bottomline is that Knicks fans should welcome Smart with open arms and a blank slate. Not only has he been with Fizdale for quite some time, but he doesn’t come to New York glued to an offense, and more importantly, doesn’t come with an agenda. Keith Smart has been a great assistant every stop he’s made, just not a great head coach.

Knicks fans, look at the Los Angeles Lakers roster and don’t become envious of their tantalizing potential. Per ESPN’s Ian Begley, Buechler is in serious talks to join David Fizdale’s staff. Thankfully they won’t be getting a top pick to add to Lonzo Ball, Kyle Kuzma, Brandon Ingram, Josh Hart, and Julius Randle—if he’s re-signed.  The Lakers have a legitimate blueprint for the future. That said, we should also be happy he’s stealing one of the premier player development coaches away from our West Coast rivals.

Jud Buechler knows what a healthy locker room looks like. Having been on losing teams and winning teams, such as the ‘98 Bulls, Buechler knows a healthy locker room from an unhealthy one. Tasked with player development by Luke Walton, Buechler draws from lessons learned over his 12-year career. “I played 12 years in the NBA and was on some really bad teams and probably the greatest team ever with the Bulls. I’ve won 23 games, I’ve won 72. So I think I have the experience and know what it takes both on the court and off the court—what the locker room should feel like in a winning situation.”

Buechler, upon arrival to the Lakers camp, was inserted in as the Summer League head coach. Per Tania Ganguli of the L.A. Times, his immediate focus was aimed at the last-place defense of the Lakers, “we were 30th in defense last year and that has to change. It has to change right now.” This fits in perfectly with what Mills, Perry, and Fizdale have been harping on: effort and defense.

Among his approach to team-building and defense, Buechler is otherwise a positive person to be around. New Yorkers and Knicks fans alike should be extremely happy that Fizdale is able to pry Buechler away from the bright future of the Lakers. Perhaps, and hopefully, Buechler envisions an even brighter one for the Knicks.

Harlem-born and just 36 years old, Royal Ivey would be another addition to an already strong Fizdale-led coaching staff. Ivey has spent the past two seasons working for the Oklahoma City Thunder, where Presti converted him immediately from player to coach. Royal interviewed for an assistant position with the New York Knicks, per Ian Begley of ESPN.

Royal Ivey has potential to become the glue guy for this new Knicks coaching regime. Ivey, never an astounding player, was highly regarded by all of his previous teammates. So much so, that when Durant said that Ivey was his favorite teammate of all time, the Thunder brought him on as a player development coach in an attempt to keep Durant in Oklahoma City. Though it did not work out the way it was planned, Ivey is all about team chemistry and development.

Despite having only two years in the NBA as a coach, Ivey has drawn clear interest from multiple NBA teams, including the Philadelphia 76ers, where he would work with Brett Brown. The versatile guard has an abundance of knowledge from his 10-year playing career that he can share with many of our young players like Ntilikina, Burke, Mudiay, Ron Baker, Dotson, and the no. 9 pick. Ivey is especially relatable to Burke, Baker, and Dotson because Ivey himself spent time bouncing between the G League and the NBA. His professionalism and ability to adapt to different situations is something that all of our players can look up to.

Ivey should capitalize on the unique opportunity to work with such a young team. He can become a mentor and a leader to each player in their own, respective ways. In what will be a homecoming, Royal Ivey should be welcomed with open arms. His deep knowledge of the game, learnings from Billy Donovan, and a close understanding of how the modern NBA is played should have all Knicks fans excited to have him on our bench.

UPDATE: Ivey is finalizing a deal with the Knicks to join the coaching staff, per ESPN.

The biggest mystery of the Knicks coaching staff so far is Pat Sullivan, whom the Knicks are in advanced talks with about an assistant coaching position, per Ian Begley of ESPN. Coming from stints with the Wizards and the Clippers, Sullivan has been around the league as a player and a coach. Most notably, in context to the Knicks, is that Sullivan began his coaching career with the Detroit Pistons in 2004 as a video coordinator. For the casual fans, New York general manager, Scott Perry, worked with the Pistons front office during this time.

Since then, Sullivan has bounced around the league—working for the then New Jersey Nets, again the Pistons, the Wizards between 2012–16, and most recently, working with Doc Rivers and the Los Angeles Clippers from 2016–18.

As a player at North Carolina, Sullivan went to three Final Fours. As an assistant coach at UNC, Sullivan was a part of three more Final Four runs. Between his appearances as a player and coach at UNC and in the NBA, Sullivan has decades of basketball knowledge that the young, developing players can tap into.

Although he’s not as reported as the other assistant coaches, Sullivan, like the others, comes to the Knicks bench with championship-pedigree as well as know-how in getting the most of his players. He’s worked with great coaches, such as Larry Brown, and will help Fizdale become the best coach that he can be. The New York media can be ruthless, but bringing in a coaching staff that has experience in player development, improving team chemistry, and building championship rosters are one way to get them on our side.

Sullivan will join Fizdale’s staff, too, per ESPN. 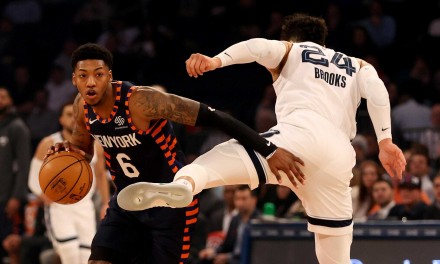