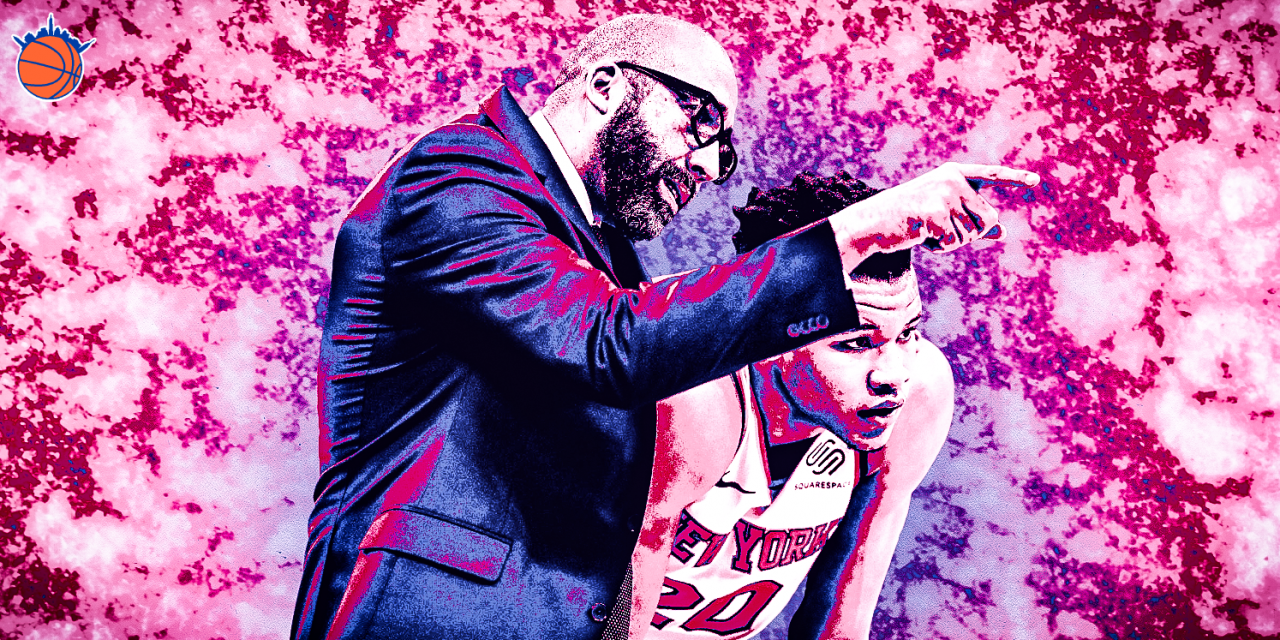 Knicks head coach David Fizdale is tasked with grooming impressionable, young Knicks players on the path of successful development. How is he psychologically training them?

When the Knicks opted to go with ex-Grizzlies head coach David Fizzle as the successor to the oft-maligned Jeff Hornacek, the thought process was that the younger, new-age coach would gel better with the Knicks’ young roster. With a faster play style, a renewed emphasis on three-point shooting, and above all else, a personality that meshes with a young, rebuilding squad, Fizdale looks like the ideal fit with a rebuilding ball club. Because, let’s face it—the NBA is now a player’s league, and some of Jeff Hornacek’s old school philosophies just didn’t jive with the current zeitgeist surrounding professional basketball.

But there’s one underrated aspect of Fizdale’s coaching style that the Knicks might have overlooked (or maybe they didn’t, who knows?)—the coach’s psychological prowess.

To an extent, some of the greatest coaches in professional sports history have implemented a philosophical approach to their job. UCLA’s John Wooden did it through his famous trio of rules, “Don’t whine, don’t complain, and don’t make excuses. Do your best.” Duke’s Mike Krzyzewski has his “next play” philosophy, and New England Patriots head coach Bill Belichick does it through, well, pure terror and intimidation.

But when it comes to the NBA, there is perhaps no greater philosophically driven coach than a name Knicks fans cringe when they hear—Phil Jackson, the Zen Master himself. It might sound funny, but Jackson was the master of getting grown men to do his bidding through a strange assortment of mind games and off-kilter coaching techniques. Fizdale’s own eccentric coaching style relates more to Jackson than one might think, but this is less about Jackson and more about Fizdale’s own increasingly transparent coaching tendencies.

Don’t look now, but Coach Fiz might be the most philosophically driven coach in the league. In other words, there is a method to his proverbial madness. And there is certainly a lot of the latter.

The great part about Fizdale’s coaching performance so far is that he didn’t come in hot, so to speak. His first agenda was simply to bond with his players and instill trust—something he did during last year’s Eastern Conference Finals when he brought Frank Ntilikina, Emmanuel Mudiay, and Damyean Dotson to the big event.

He further strengthened his bond with his players by making it a point to compliment the youngsters in public—a sign of a great leader in itself. Whether it was publicly declaring Lance Thomas his own version of Draymond Green, talking up Kevin Knox’s versatile skill set, or telling Emmanuel Mudiay “We’re going to get you right,” at his own opening presser, the Knicks coach went out of his way to build a foundation of trust with his young players.

And this, ultimately, set the stage for some of his tactics we’ve seen thirty plus games into the season.

…And Ripping It Down

After Fizdale earned the trust of his young players, he implemented a merit-based bureaucracy. He declared no starters going into the season and called for open competition. This competition lasted well into the regular season, and it appears that it’s still not fully over. But it isn’t necessarily about who’s starting. It’s about Fizdale’s willingness to play and sit players based on results.

We first saw this when Fiz yanked Kevin Knox out of the starting lineup right before the regular season began. He touted Knox as a potential starter all throughout Summer League, training camp, and preseason, but when push came to shove, he started Frank Ntilikina at the three instead of Knox to start the season.

Fizdale pulled a similar stunt with Frank. Quite a few times, actually. He first took him out of the starting lineup after his first five-game stint at the wing proved to be relatively fruitless. He then earned the chance to start at point guard—much to the delight of Knicks fans—but that was also short-lived. When Frank was pulled from the lineup a second time, he didn’t even see time in the rotation. For three games, he rotted on the bench, and it lit a fire in Ntilkina. The innocuous French Prince even managed to snap at a reporter out of frustration. Riveting stuff.

But Frank responded, and immediately showed his aggression upon his return to the lineup, scoring 18 and 16 in back to back games against the Hornets and Cavaliers. Ntilikina has been up and down since then, but there’s no questioning an increased aggression from the Frenchman since he’s returned to the lineup.

Frankie on advice from Coach Fiz, per MSG Network: pic.twitter.com/9CV3JzqHC5

Before Frank, there was a similar occurrence with one of the Knicks’ other young guards—Damyean Dotson.

For starters, Dotson was a DNP the first two games of the season. After finally making an appearance in the Knicks’ third game against the Boston Celtics, Dotson went on to score in double digits over his next nine appearances, averaging 13.2 points per game. He clearly took the DNPs to heart and responded.

After a string of up and down performances from Dot, Fizdale benched the second-year guard for another three games. He certainly took exception to this benching—a few lousy performances and he was once again riding the pine.

The good news is that the benching didn’t last long, and after a three-game stint Dotson returned to the lineup. He scored 17, 16, a career-high 21, and 17 in a string of games against the Pistons, 76ers, Bucks, and Wizards, respectively. Dotson, who averaged 11.1 points on 46 percent shooting and 37 percent from three, has responded to every single one of Fizdale’s benchings, and it’s clear the coach’s constant musings and unconventional coaching tactics have paid off in his development.

We’ve seen him bench Mudiay for long stretches. We’ve seen Trey Burke log DNPs. Knox was in and out of the lineup and Mitchell Robinson replacing Enes Kanter in the starting lineup, and vice versa. Mario Hezonja even found himself starting for a stretch (a stretch we all suffered), as Fizdale set a precedent that exceptional defensive effort will be rewarded. All of these moves were calculated by Fizdale, not just necessarily for an on-the-court advantage, but for chemistry and long-term development purposes.

This kind of stuff may not have worked in Memphis with Marc Gasol, and it might not work with Knicks’ cornerstone Kristaps Porzingis (try benching him, David), but it’s clearly had an effect on some of the Knicks’ young, impressionable players who are fighting for their NBA livelihoods.

Nonetheless, Fizdale has shown he can get away with doing these kinds of things because of the bond he has with his young players. He’s willing to fight for them on the court (as seen by his demonstrative complaining from the scorer’s table), and he’s also willing to do pushups for them.

Coach Fiz demands one thing from his players—effort—and he does his best to reward them for it. He will also punish them for a lack thereof. He’s not afraid to try a mix up psychological warfare, radical rotation altering, or just benching his players altogether. Despite his at times head-scratching maneuvers, there’s one thing that’s certain—it’s all part of the plan.