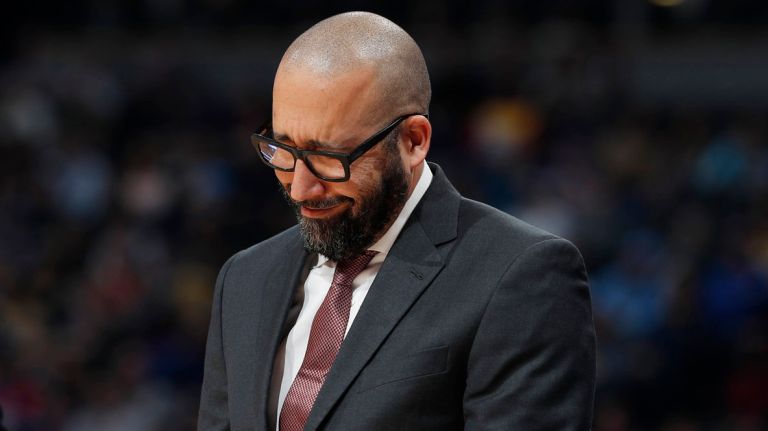 Can Coach Fizdale and the Knicks resolve both the Enes Kanter problem and dearth of talent on the team?

Now approaching the midpoint of the 2018–19 season, there is little sense of stability in the Knicks’ rotation. Head coach David Fizdale says he’s still tweaking with lineups after promising that by game 25 he’d have his player’s minutes figured out.

“Just figuring out what these kids can handle, and what was a little bit too much this first half of the season. I think now I’m starting to see, ‘Hey, this is the things they can really hang their hat on and these are the things we should probably just stay away from,’” Fizdale told the Daily News. “Moving into the second half of the season we’re going to try to trim it and simplify it for them so that maybe we can find some consistency in the second half.”

Granted, it’s not easy to figure out rotations in the NBA. The Golden State Warriors are still tweaking their rotation despite having an embarrassment of riches, so this is not an issue unique to the NBA’s bottom feeders.

Still, there are observations that can be made from one of Fizdale’s most recent changes to the team’s rotation: the insertion of Kevin Knox into the team’s starting lineup 10 games ago. Since this decision, the team has gone 1-9, suffering many miserable losses with a brutal January schedule awaiting. This stretch has been a mixed bag—and certain adjustments to Fiz’s rotation could bring a more stable performance from the Knicks as a result.

Benching of the Vets

Two of the Knicks’ three most experienced players, Courtney Lee and Lance Thomas, have essentially fallen out of the team’s rotation for New York to prioritize development of its younger players. Lee and Thomas appear to have handled this demotion professionally. However, the third-most experienced Knick, Enes Kanter, has not been as easy going with his fluctuating role. Despite playing unmistakably poor of late, Kanter has publicly sulked in response to losing his starting role to Luke Kornet.

Kanter has single-handedly held the Knicks’ starting units back in the team’s past 10 games. When paired with the regular starters of Emmanuel Mudiay, Tim Hardaway Jr., Kevin Knox, and Noah Vonleh, the Knick have posted a -7.2 Net Rating in 128 minutes as the team’s most frequently used five-man lineup.

However, the lineup of Kornet paired with the same four players has outscored opponents by 18.1 points per 100 possessions in 40 minutes together. Kanter’s inability to effectively play defense on any part of the court coupled with his tendency to be a black hole on offense simply makes him too much of a liability to justify his playing time. He may only be receiving minutes due to Mitchell Robinson’s ankle injury. Ultimately, when Robinson returns, it may be for the best to remove Kanter from the rotation entirely, no matter how much he sulks throughout the process.

Knox’s insertion in the starting lineup helped him earn Eastern Conference Rookie of the Month honors for December. Since joining the starting five, Knox has averaged an impressive 17.9 points, 5.2 rebounds, and 1.1 assists per game on 41 percent from the field, 38 percent from three, and 68 percent from the free throw line. While his scoring numbers are gaudy, Knox can still improve his efficiency and defensive impact on the court.

I hate to beat a dead horse, but Knox’s impact outside the box score was far better with Kornet at the 5, as opposed to Kanter. Furthermore, Knox with a frontcourt of Vonleh and Kornet has posted a NetRtg of 14.5 over the past 10 games, while Knox playing at the 4 alongside Kanter has a miserable net rating of -22. Knox has been excellent at grinding out buckets regardless of who’s on the court, but the pairing of him, Vonleh, and Kornet is key to ensuring the rook can score more efficiently moving forward.

Mudiay and Vonleh Holding the Team Together

The Knicks’ two biggest revelations, Emmanuel Mudiay and Noah Vonleh, have been life support for the Knicks’ offense during this stretch. The tandem’s ability to space the floor and facilitate has been key to their production, as well as some ridiculously poor play from the Knicks’ bench, which will be addressed later. To start, the Knicks’ Offensive Rating drops from 106.8 to 94.3 when Mudiay leaves the court, falling from respectable to incapable of competing in the NBA. Similarly, the Knicks’ ORtg falls from 108.9 to 90.5 when Vonleh is off the court. Evidently, the duo is head and shoulders above every other player on the team in terms of demonstrating a tangibly positive impact on the offensive end, and staggering the duo’s minutes may raise the team’s offensive floor moving forward.

The Bench Mob (or Lack Thereof)

With Knox’s promotion and injuries to Allonzo Trier and Robinson, the Knicks’ bench has been putrid during this recent stretch. There has been minimal consistency with Fizdale’s bench lineups in terms of who is playing, and the team’s struggles have shown as a result. Over the past 10 games, no five-man lineup has played more than 20 total minutes, demonstrating New York’s inability to stick with similar lineups on a game-to-game basis.

There’s too much flux for these lineups to succeed, and as a result, Frank Ntilikina and Damyean Dotson have played very poorly over this stretch. The second-year guards have each posted a NetRtg of at least -14, by far the worst out of players who have been healthy recently.

Where to Go From Here

Two main adjustments stand out for the Knicks to prioritize development and have some semblance of consistency moving forward.

The first tweak to Fiz’s rotation should be to stagger Mudiay and Vonleh’s minutes. The duo has played together for 254 minutes since mid-December, and more should be asked of each player to elevate those who are struggling, potentially helping Ntilikina and Dotson break out of their slumps. Despite the scoring prowess of Hardaway and Knox, the volume-shooters do not buoy the team’s offensive efficiency like the more complete skill-sets of Mudiay and Vonleh.

Secondly, when Mitch gets healthy, Kanter should be removed from the rotation for the near future. Kanter’s poor play and attitude concerning his demotion has made him a major liability both on and off the court. Providing skills which Kanter lacks, both Robinson and Kornet can operate off ball offensively and hold their own weight defensively. Experimenting with Vonleh at the 5 could also be a possibility; in 227 minutes at center, Vonleh has posted a NetRtg of 0.6 this season. A move like this could help the Knicks adapt to a more modern approach, boosting the team’s spacing offensively as well as its defensive versatility. However, it appears Fizdale has different plans for the rotation upon Mitch’s return.

How will Fizdale handles centers when Robinson returns? "Yeah, that’s going to be a juggling act that I’ve got to figure out, trying to get them all minutes and get them all where they all go, like they can get their feet wet and contribute." #Knicks

As Fiz has shown repeatedly, nobody is in his dog house for good. Some games off for Kanter could help him hit the reset button. If it doesn’t go swimmingly, New York has the options of trading or buying out the disgruntled center.

The Knicks are close to discovering which pieces should stick in the rotation for the remainder of the season, and which lineup combinations work the best. The team’s next goal should be to find more balanced groupings heading into the All-Star break.