Davis Bertans May Be the Antidote to Knicks’ Bobby Portis Conundrum 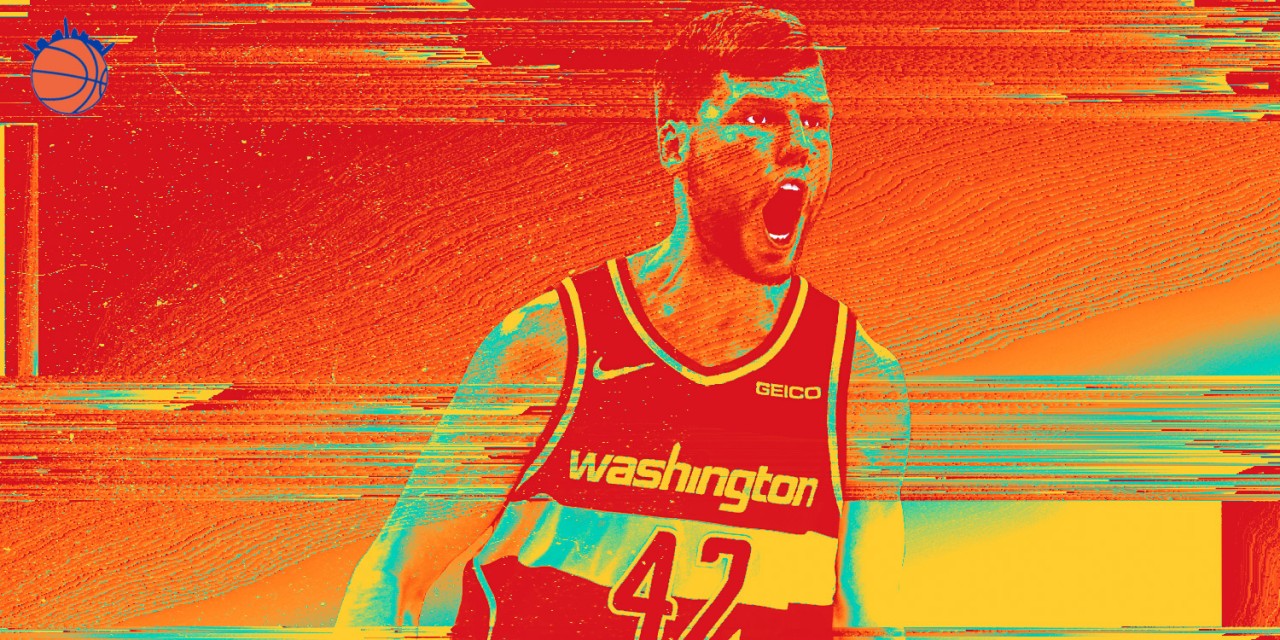 Wizards forward Davis Bertans opted out of playing in the NBA’s restart. Will the Knicks offer the Latvian a huge free agency deal?

Although it’s more due to the overall weakness of the impending class of free agents, Davis Bertans will be one of the biggest names on the open market, and New York Knicks should be dying to sign the Washington Wizards’ sharpshooting forward.

New York will be in greater need of shooting now that Allonzo Trier is gone, and with the possibility of Damyean Dotson being soon to follow. The Knicks drafted Dotson 44th overall and signed Trier as an undrafted free agent in back-to-back offseasons. Both young shooting guards showed promise in the 2018–19 campaign.

Trier and Dotson shot 39.4% and 36.8% from deep, respectively, the top two percentages for Knicks that played in at least 20 games. This past season, they only appeared for a combined 72 games, both averaging under 18 minutes per game after averaging at least 22 minutes each in the prior season.

Trier was waived in favor of Theo Pinson on Friday, and it doesn’t make much sense for Dotson to remain with a team that values him so poorly. Although he will be a restricted free agent—meaning the Knicks can bring him back by matching any contract he signs elsewhere—it’s hard to imagine Dot having a strong desire to remain with New York.

Although Bertans won’t fix the Knicks’ three-point ineptitude single-handedly, few other players would be as good a patch as the Latvian Laser.

Dāvis Bertāns was an absolute sniper this season. I hope he gets paid what he's worth in free agency this October.

Bertans averaged 15.4 points and 42.4 percent shooting from deep in the 2019-20 season. Across the whole league, the 6-foot-10 Latvian ranked seventh in made three-pointers and tied for seventh in three-point percentage.

This season, Davis Bertans was one of two players to connect on 200 triples and shoot over 40% from beyond the arc, along with the Miami Heat’s Duncan Robinson. In the history of the league, there have only been 44 seasons in which a player accomplished both marks. Bertans did so while playing the second-fewest games in the group at 54. Steph Curry reached both thresholds across 51 games in the 2017–18 season, the only other time a player playing fewer than 60 games pulled it off.

Bertans’ shooting efficiency from beyond the arc is made more impressive when you consider his volume. He attempted 11.3 field goals per game and 8.7 of those attempts were shot from behind the arc, which ranked eighth in the league. With a three-point attempt rate of .774, only five players shot from deep more frequently than Bertans.

Most of Bertans’ shots—74.8%, to be exact—weren’t preceded by any dribbling. He’s almost exclusively a catch-and-shoot guy, which is good for a couple of reasons. First, it’ll allow the young players more time to handle the rock while benefitting from the space Bertans’ gravity will command from defenders. Second, Bertans can make shots while moving. He doesn’t just nail shots in a stationary, balanced stance; he can move across the floor, catch the pass, and fire away with machine-like function regardless of which way he’s moving.

Davis Bertans was truly a joy to watch this season.

Just launched 3s whenever from wherever: pic.twitter.com/oO3ZlK5RQc

Davis Bertans’ breakthrough is due to the enormous green light Washington allowed him. He has always been an above-average shooter in the NBA, as he shot above 37% in three seasons with the San Antonio Spurs—including a career-high 42.9% in the season before being traded to Washington. With his increased volume and range, Bertans is the ultimate sharpshooting big man.

Having a stretch big man would do wonders for the Knicks. Alley-oop-slamming center Mitchell Robinson and dextrous finisher R.J. Barrett, among other youngsters, would have more room to operate and a reliable failsafe to pass to when the defense collapses on them.

New York’s front office tried to bring in a stretch big in Bobby Portis last offseason, but that blew up in their face. Portis opted for face-ups and isolations far too often. He disrupted the flow of the offense by not launching three-pointers at the rate a stretch center should. When he did shoot triples, he converted on them at a rate just .01% above the league average.

Those problems aren’t present in Bertans’ game. According to NBA Stats, 65.4% of Bertans shots were catch-and-shoot three-pointers. Such shots only accounted for 30.7% of Portis’ field goal attempts. Bertans’ touches lasted two seconds or shorter 80.6% of the time. Portis’ only lasted that shortly 61% of the time.

Unfortunately, Bertans would bring many of the infuriating flaws Portis touted. How bad is Bertans’ defense, you ask? Not very good. He’s not quick and doesn’t have a brilliant defensive I.Q. or much jumping ability. How about his playmaking? Practically nonexistent, as he averaged just 1.7 assists per game. His rebounding? Garbage; he only averaged 4.5 rebounds in 29.3 minutes per game. Portis averaged 5.1 boards in 21.1 minutes.

Although shooting is just about the only area where Bertans and Portis differentiate, the difference is staggering. Triples don’t even make up a third of Portis’ shot attempts, as he posted a bleak .317 three-point attempt rate, almost 2.5 times less than Bertans. Efficiency and volume fall well in favor of Bertans, who isn’t just a better fit for the Knicks than Portis, he’s a better fit than most of the league’s role players.

Bertans took a huge leap this season and is in line for a big payday. Though the Wizards will return to play when the 2019–20 season reboots in July, Bertans won’t. He became the first player to opt out of playing the rest of the season. One look at his career explains why he made such a decision.

Before making the jump to the NBA in 2016, Bertans tore his right ACL twice. The combination of financial uncertainties caused by suffering an injury and the coronavirus—which put the league on a months-long hiatus, among other economic bruises—create incredible risk for players with histories of injuries.

In the midst of a breakout season, Bertans wisely chose the risk was not worth continuing to play for the Wizards this season, who sit 5.5 games out of the playoff picture. He chose to preserve his health so he can maximize his value in free agency. New York, a team in dire need of shooting, should prioritize him as a target.

Although 27-year-old Davis Bertans doesn’t exactly fit the rebuilding Knicks’ timeline, he would unquestionably benefit the team. His shooting brilliance is enough to overcome his shortcomings and he would do wonders for New York’s defunct offense.

»READ: What to do with Reggie Bullock, Wayne Ellington and Knicks’ need for outside shooting