Defense Leads the Way Again as the Knicks Beat Blazers 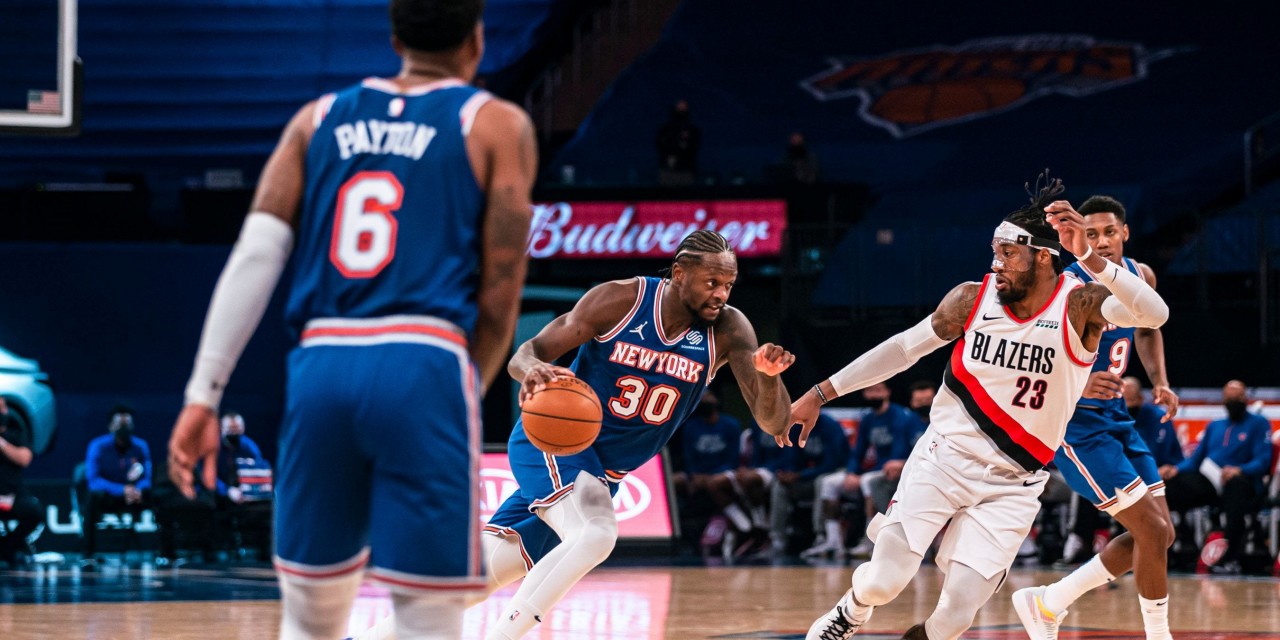 The Knicks held Damian Lillard mostly in check on Saturday afternoon, defeating the Blazers with the help of balanced offense, too.

“A win is a win” is the best way to describe this one.

The Knicks came out swinging before Lillard settled them back down. Lillard scored 13 first-quarter points to give his shorthanded squad the lead after one. The Knicks went with a more democratic scoring approach, with each starter contributing to the pot. The second quarter felt much more like an early afternoon NBA game, but some timely shot-making by R.J. Barrett and Elfrid Payton gave the Knicks a 57-51 lead at the break.

The most succinct way to summarize the third quarter was weird. Barrett, Randle, and Payton continued to lead the scoring effort as the Blazers could not stop a soul from driving on them. Thibodeau sprinkled in some second-unit guys but mostly kept with his starters the duration of the second half.

Despite being held scoreless a majority of the final four minutes, the Knicks survived on Blazer misfires. Portland had a good day from deep, hitting 17 threes, but ran out of gas in the end missing too many attempts down the stretch to count. A healthy Lillard likely pulls this one out, but a banged-up Dame with no help could not overcome the Knick defense.

R.J. Barrett is good. That feels good to say and every game is becoming a joy to watch. Barrett flashed a bit of everything today: euro-step, faders, pull-ups, even some three-point makes in an impressive 18-point performance on 8-for-14 shooting from the field.

The game is noticeably slowing down for Barrett and the results have been consistent. His team needs him to get them close to 20 points a night and Barrett is stepping up to the challenge on a daily basis.

Do any of these numbers make any sense? I am having trouble finding out why Thibodeau decided to play Gibson more instead of trying Toppin with Randle or even Toppin at the five. The Payton-Quickley dynamic was even worse, especially in the fourth quarter when Thibodeau pulled Quickley following a 30-second sequence in which he generated five points.

The Knicks failed to score down the stretch, and the worst part is it was preventable.

Matinee games usually get off to sluggish starts. Players are so accustomed to playing at night that in some cases the whole first half is a drag. That has not been the case for the last two afternoon games.

Once again the Knicks came out swinging, with each starter contributing a bucket for the team’s first 10 points. The overall pace of the game was great too with the Blazers matching the Knicks’ quick start. Lillard took control of the quarter ending with 13 including a vintage Logo Lillard bomb.

The Carmelo Anthony homecoming was not a memorable one. ‘Melo finished with two points, failing to surpass Oscar Robertson for 12th on the all-time scoring list.

A nice gesture by the Knicks would have been re-signing Michael Kidd-Gilchrist to play this game, and matchup on Anthony the entire time.

TKW Clip of the Day

Tom Thibodeau is the only person capable of containing Immanuel Quickley right now. Quickley played a baffling 13 minutes today. At least Quickley made the most of it, contributing 12 points including this beauty.

One day we will get to see stuff like this for twice as long.