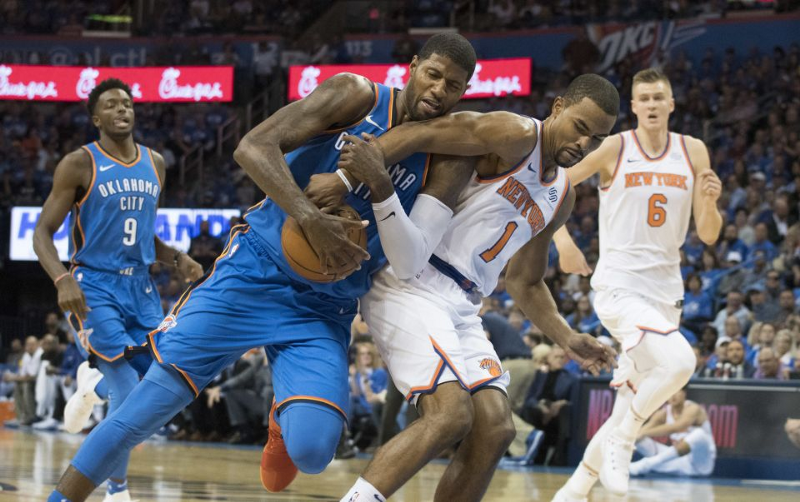 The Knicks, struggling on both ends of the court, are producing some really ugly numbers; let’s look at them!

The New York Knicks were not expected to be good this season. That being said, the Knicks are now 0–3 and have been about as competitive as a G League team. Although relatively stagnant on offense, the Knicks defense has been their Achilles’ heel, placing them amongst the league’s worst in nearly every feasible defensive metric.

Well, statistically, yes. Hardaway Jr. culminated 2.1 defensive win shares (DWS) over his “breakout” season in 2016–17, a whole win share higher than the next person on the list: Courtney Lee.

Factoring in his somewhat more consistent shooting stroke, it seemed as if, under a run-and-gun coach like Jeff Hornacek, he might be ready to take the next step in his career. Three games in, it seems to be the exact opposite with the young guard struggling on both ends of the court immensely. Through three games, for any player who has played in all three games, Hardaway Jr. has the team’s worst defensive rating at 120. Although early, Hardaway Jr. has -0.1 DWS through the first three games of the season, making him a hindrance more so than a well-utilized player on that end of the court.

The tale of the tape, though, does not end with Hardaway Jr., rather he is just a stark example of how mediocre the Knicks have been defensively. Utilizing the same win shares statistic for every other player on the current roster shows misery on defense: every player has a flat zero in the category, aside from Enes Kanter who has 0.1 DWS. Not ideal, even if it is early on in the season.

The following are key defensive categories and where the Knicks currently rank in them across the league.

Rebounding: Knicks average 29.7 rebounds per game, 29th in the league.

Blocks: Knicks average 2.7 blocks per game, 28th in the league.

Steals: Knicks average 7.3 steals per game, 23rd in the league.

The aforementioned three categories are effectively the three core statistical of any good defensive unit that immediately jump off the page. The Knicks, as you can easily see, are good at a grand total of zero of those categories.

Tim Hardaway Jr. is off to a 9-37 shooting start. He has struggled mostly in spot-up situations and as a shooter off the pick & roll #Knicks pic.twitter.com/tT59gIDnCR

As a team, the Knicks’ defensive rebound percentage (DRB%) currently lies at 73 percent, meaning that the Knicks have thus far been able to grab 73 percent of available rebounds, good for third worst in the league.

The best offense is defense, though, right? Well, in the Knicks case, when the ball is in their hands, that hasn’t really been the case. The Knicks currently average 18.0 turnovers per game, the fifth worst in the league, leading to opponents averaging 24.3 points per game off of those turnovers, which is tied for the highest points allowed off turnovers in the league. The team tied with the Knicks? The Bulls. (In tank terms, that’s good! In playing competent basketball terms, it’s very bad.)

Finding themselves in uncomfortable positions regularly, a phrase I’m sure has been repeated an umpteen amount of times with this franchise, the Knicks have allowed 17.0 points per game off the fast break to the teams they’ve faced this season, the third worst total in the league.

Weirdly enough, though, despite this accumulation of horrendous defensive figures, the Knicks only allow 108.7 points per game, the 18th “best” mark in the league if we’re trying grasping at straws here.

Individually, no Knicks player has a defensive rating (DRtg), a figure used to determine an estimate of points allowed per 100 possessions, of under 100. As a team, the Knicks DRtg is 109.3, good for the seventh worst in the league. For context, the best figure in the league currently belongs to the 3–0 Los Angeles Clippers who have posted a team DRtg of 86.1 (still a bit inflated in the early season).

Despite the Knicks’ individual DRtg showing a lot more bad than good, there are a few trends that are good:

The Knicks are not supposed to be good, not just because they can’t be, but because it would largely hurt the team in the long-run. We know that this team is clearly inept at producing defensively and while Ntilikina could possibly bring reassurances utilizing his frame on the perimeter, nothing is guaranteed, especially considering his newly formed injury concerns.

Truthfully speaking, these metrics are unlikely to change. Between the current instability at point guard, THJ’s current form — a form that became a constant in his first spell as a Knick — and the team’s reliance on Kristaps Porzingis on offense, hindering his defensive contributions, these Knicks are going to be bad defensively with very little they can do to change that.

The plan to cope with this upcoming season is simply to sit back, continue to give you all the tough-to-digest facts you probably don’t want to know, and then get excited again in June when the NBA Draft Lottery and NBA Draft roll along and the endless cycle of being a Knicks fan resets for yet another year.

All statistics courtesy of NBA stats and Basketball Reference.