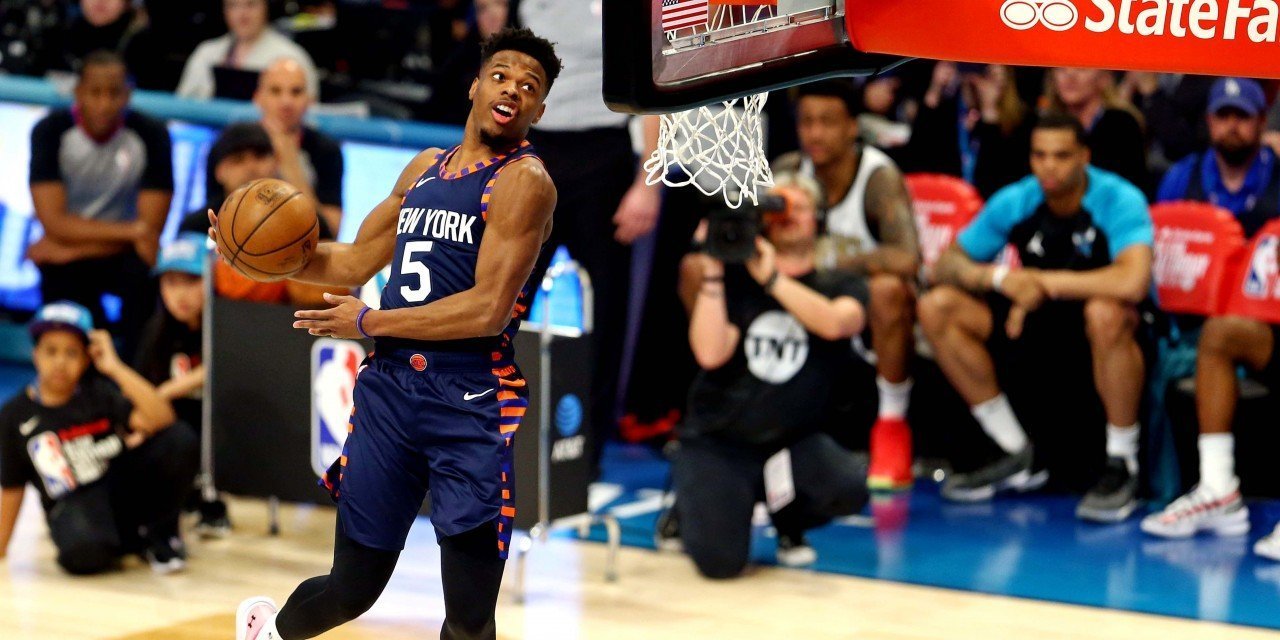 For the first time all season, someone wearing a Knicks jersey competed in something meaningful.

Dennis Smith Jr. returned home to Carolina to represent not just Fayetteville, North Carolina, but his new squad, the New York Knicks. It was Smith Jr.’s second contest in as many years, and the seventh Knick to compete in the main event of All-Star Saturday, the last since James White in 2013. Knicks fans saw rookie Kevin Knox participate in Friday night’s Rising Stars Challenge, too.

Previous Knicks to compete have repped the city appropriately, Nate Robinson being the most accomplished, and Smith Jr. looked to carry on the tradition. Remaining true to his brand, DSJ felt confident he could bring the crown back to the city, in front of his hometown crowd.

He was the veteran of this bunch, and noted his experience from last year’s contest would come in handy. A slow start cost him from advancing last year, even though he had the dunk of the night (and only true 50), a nasty between the legs, switch-over, 360.

That experience was put to the test immediately. His night began eerily similar to last year.

He missed his first two attempts, leaving him the chance to miss a third and all but end his night. But unlike last season, where he pivoted to a safer dunk to survive, DSJ—on the counsel of hip-hop artist J. Cole—stayed with his original dunk heading to his final attempt.

DSJ’s confidence paid dividends as he was rewarded with a 45, good enough to put him second, behind Queens, New York native Hamidou Diallo after the first wave.

For his second dunk he went to J. Cole for the rare feature.

He took the lob from Cole and elevated to a crazy height for the Jumpman finish. It got him a 50—once again replicating last season’s performance—setting up a final round duel with Diallo.

The final round did not get off to a great start. In a redux of his first attempt in round one, DSJ missed on his first two attempts, what looked like a throwback to his 2018 dunk that netted a 50.

This time around he did pivot to a safer, but still impressive, dunk which he failed to convert.

Behind the eight ball to Diallo, who put on a show all night, Smith Jr. needed a great finale to keep it competitive. He brought out Steph Curry and Dwyane Wade, looking to catch a lob from Curry to do a windmill over Wade.

It took him three chances but he got it done.

The dunk got him a shocking 50, which kept the suspense alive for a few more minutes. Diallo ended up capping off a wire to wire victory, giving NYC a win of sorts.

Smith Jr. did manage to put together a better showing, improving on a third place finish in 2018 with second place honors. Getting up was not the problem for Smith Jr., his head was at the rim every single attempt, but his execution was just a bit off.