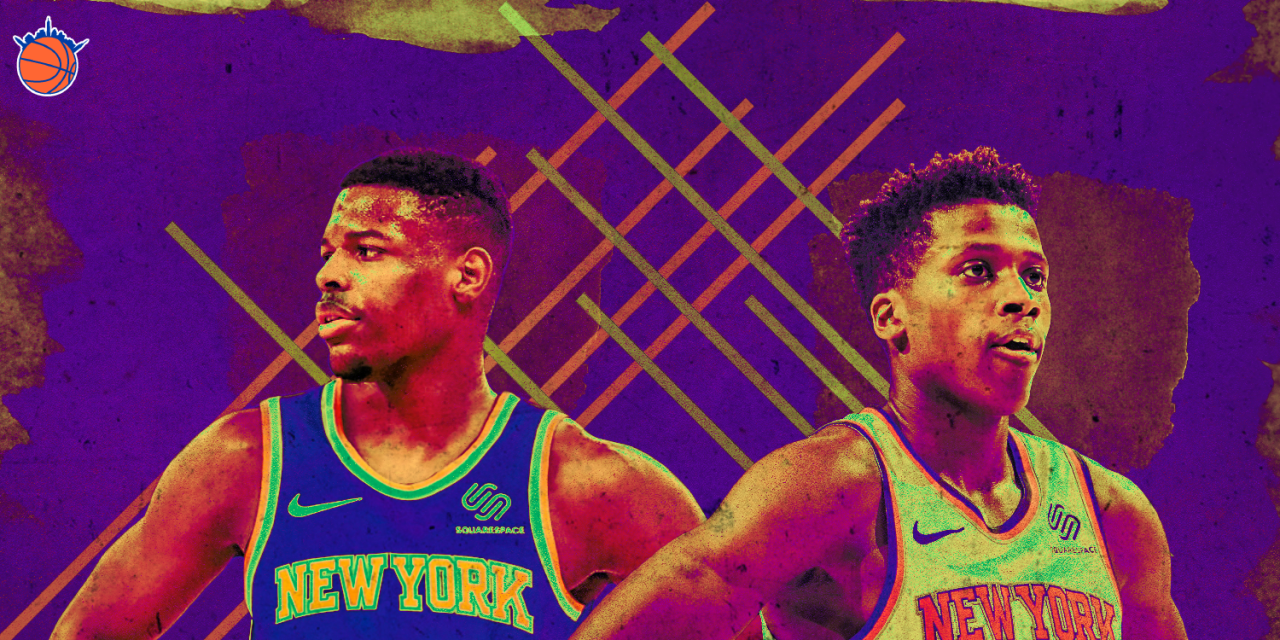 We’re 48 hours removed from the biggest Knicks trade since the one that brought Carmelo Anthony to the Garden, so it’s time to swallow past the lump of hot tears in our throats and figure out what this team is going to look like moving forward.

The promise of cap space and future picks is tantalizing in the way the unknown always holds a certain romantic sway, with its promise of mystery and possibility, but for now let’s focus on what we can see in front of us—players who are actually on the roster, not those who might someday sign.

After a year and a half spent criticizing Frank Ntilikina for not being Dennis Smith Jr. or Donovan Mitchell, criticizing Phil Jackson for selecting Ntilikina over Smith Jr. and Mitchell, criticizing James Dolan for letting Phil make the draft selection only to fire him days later, the former eighth and ninth overall picks are now teammates. The irony is rich and inescapable. And with less than a week to go before the trade deadline, it’s possible that Smith has rendered Ntilikina expendable; that soon the last vestige of Phil Jackson’s brief reign will depart our city for a new home like the ghost of Kristaps past (I hope not). But for the sake of argument, let’s assume the front office decides to hold onto the French Prince so we can take a look at how Frank and Dennis could work together.

On paper, the two guards seem tailor-made for each other: the highly-confident, highflying offensive dynamo trying to shatter backboards with his rim-rattling dunks, and the mild-mannered defensive maestro who just wants to orchestrate the offense and not have to take too many shots.

It seems the front office might hold a similar opinion. Discussing the trade, Steve Mills told Marc Berman, “We’re fortunate to have both Frank and Dennis. The things they can do to complement each other’s skill set is a fortunate place for us to be as we try to develop young players.” A gentle, if purposeful endorsement, and one that makes no promises for how David Fizdale will use the two.

But you can see the outline. Dennis wants the ball in his hands. In Dallas, that was one of the reasons he took a paid couple-week long leave of absence from the team. He’s at his best getting into the teeth of the defense and either finishing at the rim or kicking out to shooters. Frank is at his best attacking a shifting defense, when he can get downhill faster and maximize what little foot-speed he has.

Both are at their best when pushing the ball. This seems counter-intuitive for a slower, headier guard like Frank—but the truth is, the less time the Frenchman has to think, the better. When forced to react, he becomes most dangerous. In his last game before getting hurt, Frank was as aggressive as he’s ever been pushing the pace, and the team got open look after open look (Noah Vonleh just missed most of them).

Fizdale loves guards that push the pace, and is probably already drooling at the idea of Smith getting out on the break:

David Fizdale on Dennis Smith Jr.: “I want to put the ball in his hands a lot and get him out in the open court and get him a lot of space. Give him some freedom to make some mistakes … The kid’s a talent and hopefully we can bring it out consistently.” pic.twitter.com/ars8uaHSgR

Defensively, there’s a lot to like in a Smith-Ntilikina pairing as well. Though Smith lacks both size and length (6’3″ with a 6’3″ wingspan), he’s built like a brick house from the waist up, with quick twitch ability to slide with even the quickest guards. He’s never been known as a lockdown perimeter defender, but with the addition of Luka Doncic pushing him off-ball earlier this season, Dennis was able to focus more time and energy on that end of the floor, with generally positive results.

It’s possible that the on-paper fit of the two 2017 lottery picks doesn’t carry over to the court. Frank has often disappeared further into himself when asked to play off-ball—and for a player already too in his own head, that can be a death sentence. This is where Dennis Smith’s experience with Doncic will hopefully come into play.

He’s not the same guy that came into a team led by Midrange Iso-Master Harrison Barnes and chucked his way through his rookie season. He’s learned how to co-habilitate with another ball handler and distributor. Hopefully he now has a better sense of how to keep the balance between getting himself going and keeping his teammates in rhythm.

READ: What’s the Knicks’ Plan B after moving on from Kristaps Porzingis?

The other problem facing an Always Sunny backcourt: most of the young talent on the team outside of Knox and Mitchell resides in the guard spots. Emmanuel Mudiay had all but been guaranteed the starting spot for the rest of the season before getting hurt, and he’ll be back soon. His return will be Fizdale’s first tough call of the post-Porzingis Era, but not the last. Damyean Dotson started in the first game since Tim Hardaway Jr.’s departure and put up 22 points and six rebounds in 37 minutes. Allonzo Trier has a stake to claim as well.

Will Fizdale be willing to try out the allegedly 6-foot-7 Frank Ntilikina as the shooting guard when he has yet to prove he can consistently shoot, and with two rock-solid options waiting in the wings (pun intended) behind him?

It remains to be seen. Frank was not this front office’s pick, and Fizdale’s feelings on him have never been completely clear. His role has oscillated more than anyone on the team outside of maybe Enes Kanter (whose role has changed for very different reasons), and when asked what the trade meant for Frank, Fizdale’s response wasn’t exactly brimming with hope:

That doesn’t necessarily mean anything bad. But it sure doesn’t sound great.

With nothing left to lose this season, there seems to be little reason not to at least try out the pairing that cost them their franchise player. The Knicks’ front office and coaching staff have never seemed quite sure what to do with Frank—whether to play him at the one or the two (or in Fizdale’s case, sometimes the three), but if the team is truly committed to maximizing both, this trade may have just answered their own question for them.