Can Dennis Smith Jr. and Kevin Knox Push Each Other in the Right Direction? 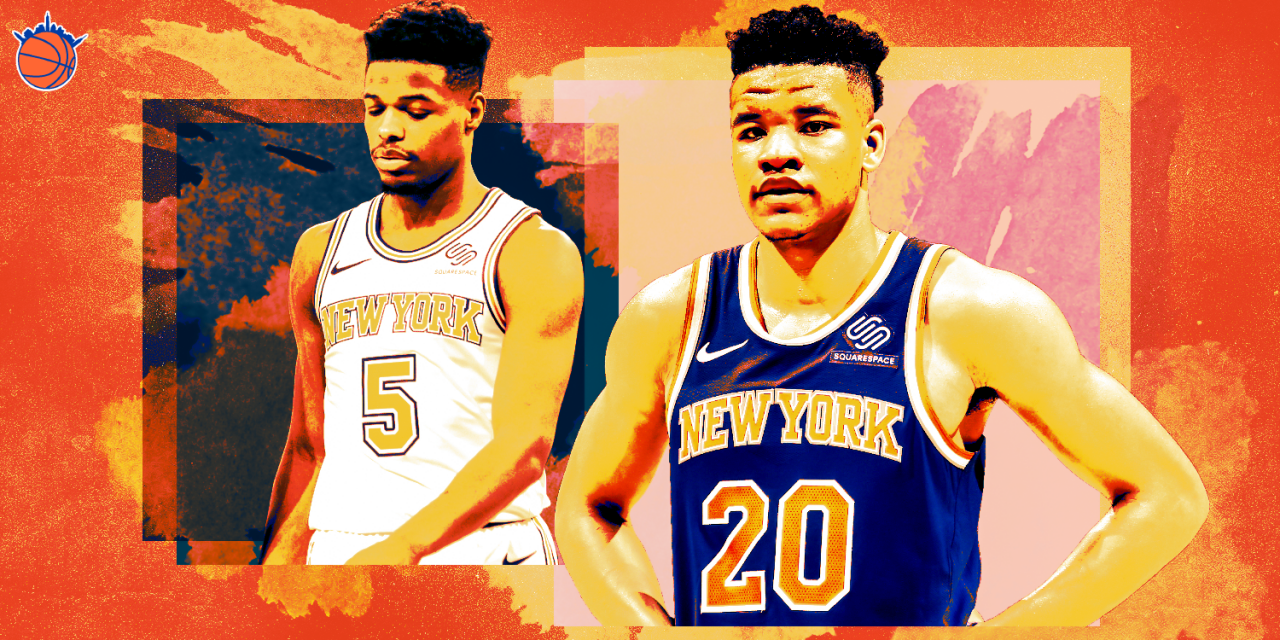 Kevin Knox made the Rising Stars Challenge due to another player’s injury, and Dennis Smith Jr. didn’t even make the cut. The two young Knickerbockers need one another to improve themselves and the team.

The New York Knicks have been fighting for respect the last few games, and newly christened Knick Dennis Smith Jr. has emerged as a leader among the team in such a short time. The ungracious exit of Kristaps Porzingis and the electrifying entrance of Smith Jr. put the Knicks in a state of frantic confusion.

Rookie forward Kevin Knox embodies the Knicks’ shortcomings fully: he’s a liability on defense, and too raw to have a consistent impact on offense. In short, he’s underdeveloped and without a clear path to success.

However, Smith Jr.’s arrival could be the start of something beautiful in Madison Square Garden. The duo has shown a glimmer of chemistry which head coach David Fizdale may be able to parlay into a successful partnership between a scoring point guard and an athletic wing player.

Kevin Knox hasn’t had the most prosperous new year. Over the last 15 games, he’s averaging 13.7 points while shooting a poor 35.4 percent from the field. His three-point shooting has taken a dip to 30.7 percent as well. Knox’s play is so far removed from his Eastern Conference Rookie of the Month in December that it’s no surprise he only made it to the Rising Stars Challenge due to Lonzo Ball’s injury.

At a glance, his funky low-point hasn’t been lessened by the arrival of Dennis Smith Jr. However, Smith and Knox have had somewhat of a spark in their five games together.

Kevin Knox is on the board ? pic.twitter.com/Zzq3kiir29

Smith Jr. hitting Knox in stride for three seems like a simple read. Both Knicks take a chance at a quick three, and it just so happens to pay off.

There’s more to it. Knox isn’t an incredible three-point shooter, but DSJ trusted him with the shot in their first game together and it paid off. Knox is only shooting 26.3 percent on passes from Smith., but it’s only the beginning of their working relationship.

Before the trade, Dennis was developing chemistry with incumbent scoring forward on the Dallas Mavericks, Harrison Barnes. In his first season, 73 of his assists came from field goals made by Harrison Barnes, while 33 came from Barnes in his second season before the trade—the most he made to any teammate during his tenure with the Mavericks.

The numbers aren’t especially intriguing from either side, but the potentiality is what’s most impressive.

Smith uses his speed to get to the basket often, and if Knox can learn to knock down the catch-and-shoot three-pointers consistently, the two Knicks may be able to utilize the simple kick out for more offensive sets that would leave defenses off guard.

Knox is only shooting 34.3 percent on catch-and-shoot threes this season, but if the Knicks are dedicated to his development, improving these numbers should be at the top of their list since he attempts 4.4 of them a game (per NBA Stats).

At this point in his career, Knox’s focus should be shifting from a volume shooter to a volume scorer. Efficiently hitting three-point shots in the modern era is a skill that will help him make that leap; getting those shots up off a slashing point guard hitting the open man may be the best approach.

Plus, if Dennis Smith Jr. can pull off one of these every once in a while, I couldn’t complain.

As easy as it is to rave about the potential pairing, there hasn’t been enough time to definitively state Smith and Knox are a match made in heaven. Through their five games, Knox has only been assisted by DSJ five times—the most to any Knick. Since joining the Knicks, Smith is averaging 6.0 assists per game, up from 4.5 assists per game in Dallas. The change of scenery has been working for him in that regard. Still, he appears to be a better distributor than the Knicks’ other point guard options.

Frank Ntilikina has an assist percentage of 19.5 percent. DSJ’s draft classmate has played much more off-ball this season, and the competitive nature of their relationship has pivoted into a complementary one, with fan interest in how they would fit next to each other on the court.

Emmanuel Mudiay, who has been compared to a less gifted version of Smith Jr., has an assist percentage of 24.1 percent. One of Mudiay’s greatest criticisms is his approach to offense. As floor general, Mudiay looks to pass almost exclusively when facing an obvious denial, whether at the rim or on the perimeter.

It’s similar to Ntilikina’s passiveness—it looks like the point guard giving up on the possession. Where Smith differs from the aforementioned Francophones is that he’s not afraid to give up the ball. His Plan A isn’t Dennis Smith scoring, it’s his team scoring. The first tweet embedded above is a perfect example. Smith Jr. isn’t close to being a league-leading facilitator, but he’s a start.

The Knicks have dedicated the season to “development,” and while a select few individuals have shown the makings of NBA-caliber talent, the players on the roster lack team chemistry.

Teamwork is the premier building block of a successful team. Smith and Knox’s fit together is among the positive outcomes this season has yet produced. The Knicks would be wise not to squander it.