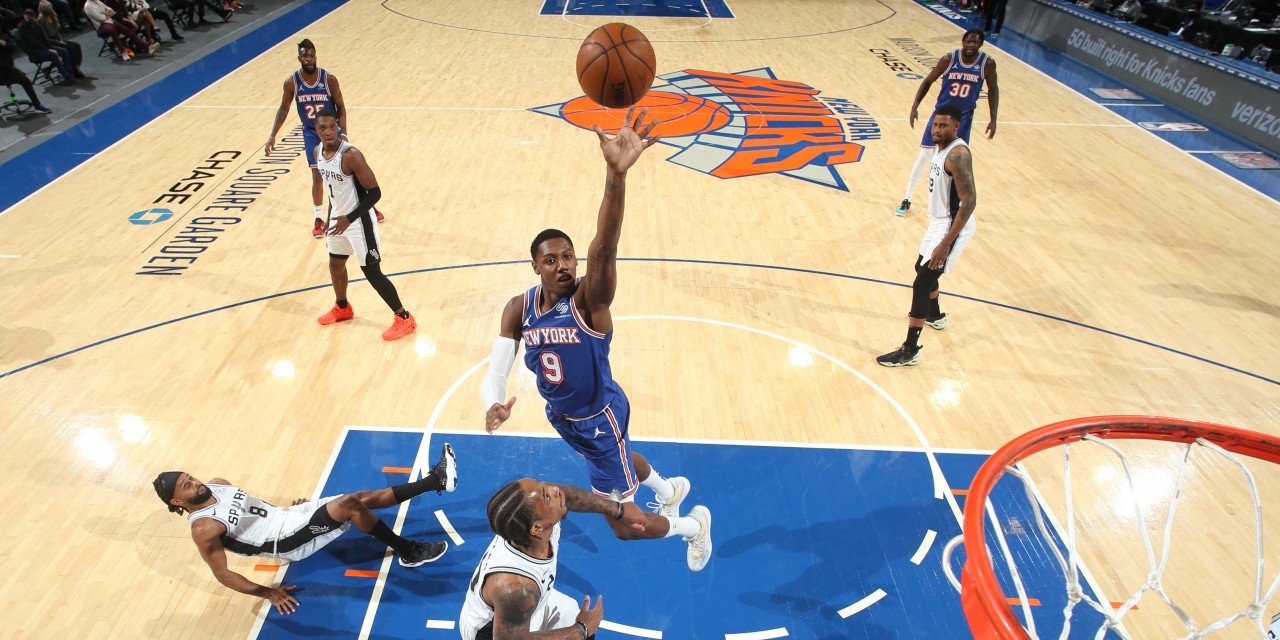 The ability to fight and ability to have several players on the roster contribute was on full display as the Knicks defeat the Spurs, remain alive in the race for the fourth seed in the Eastern Conference.

NEW YORK, NY — For a brief moment in time, it felt as if the New York Knicks and San Antonio Spurs were playing a replay of their March 2nd matchup.

San Antonio throttled New York that night, capitalizing on every Knick miscue. When the Knicks would miss a shot, or turn the ball over, the Spurs did what the Spurs were able to do for the better part of the last three decades; spurn opponents outside shooting and perfectly executed offense. San Antonio ended up nailing 42% of their threes and New York went quietly into the night.

Thursday’s matchup began as a rock fight, with both teams shooting under 40% from the field in the first half. The game resembled a circa 2000 Knicks-Spurs matchup more than anything. Then, out of the blue, the Spurs went off for 25 points within the first six minutes of the third quarter, assuming a double-digit lead and pushing New York to the brink of a blowout.

Only, those pesky Knicks didn’t allow the game to go into the night. With the fourth seed in the Western Conference and the playoff looming, New York fought back, turning a 17-point deficit into a 102-98 victory.

“It was a concern coming off of a long road trip, a quick turnaround for us, and just find a way to win,” Knicks head coach Tom Thibodeau said after the victory. “Just keep fighting and that’s what we did. We got down big in the second half and we came back. We played good defense, we started shooting the ball, started making the extra pass and we got some good looks. San Antonio’s game plan … they make it tough on you. They’re long, athletic, and make you play the game for 48 minutes and that’s what we did.”

The victory kept New York alive in the race for the fourth seed, but it remains an uphill task, as the Miami Heat and Atlanta Hawks also won in blowout fashions to remain ahead of the Knicks. A fourth- or even fifth-place finish would result in the Knicks playing either one of Miami or Atlanta, but a sixth-place finish could result in New York playing the Milwaukee Bucks, or even their crosstown rival, the Brooklyn Nets.

“Do you want the honest answer?” Julius Randle jokingly answered when asked about scoreboard watching. “Yes, I was watching. For sure. People who say they aren’t watching are liars. I was watching.”

THESE ARE ALL-NBA BUCKETS pic.twitter.com/GlNY8WWLPA

Randle finished with 25 points and nine rebounds in 45 minutes, while R.J. Barrett finished with 24 points, nine rebounds, and five assists. The notable story was who the Knicks saw return to the court. On the court, Alec Burks returned, recording team-high 30 points and 10 rebounds off the bench. After missing the last 11 of the last 13 games with various injuries and health and safety protocols, the eight-year veteran returned into the lineup and didn’t miss a beat.

Thibodeau jokingly noted that Burks had plenty of time to return, but the veteran said it was great to get a rhythm again and the behind-the-scenes preparation got him ready to contribute right away.

“I was trying to catch a rhythm,” Burks said. “I think a lot of the preparation I did before the game, like playing with my teammates, going through practices, working out in the weight room and working with everybody allowed me to be prepared for the moment.”

As for the players who missed the game, Derrick Rose sat out with an ankle injury. Thibodeau did say that he prepared and tested the ankle before the game, before deciding that he “needed another day.” Before the contest, Rose was having his best stretch of the season, averaging 22.0 points, 4.3 rebounds, and 4.8 assists in six games in May.

With Burks back, the Knicks have plenty of options at the point guard position, heading into the playoffs. Elfrid Payton remains the team’s starter, but his minutes have slowly been ramped down over the last two weeks, playing under 20 minutes in 11 of the team’s last 12 games. Rose has been the beneficiary of that decline, seeing his minutes increase with his recent success.

However, with Burks available, Thibodeau has another play he trusts with the ball, as the coach deployed Burks as a point guard for occasional stretches throughout the season.

“We like our depth,” Thibodeau said. “We have versatility. Each game tells you something different. Whatever you need you have the answer, whether as a starter or on the bench. You got guys who can play multiple positions, guys who can go off the dribble, guys who can shoot the three, so whatever is working for us, whatever we need, everyone’s sacrifice to put the team first … winning is the most important thing.”

The Knicks remain home at Madison Square Garden to host the Charlotte Hornets on Saturday, May 15th. Tip-off is set for 1 p.m. ET.