Derrick Rose Assists Knicks Off the Bench in Rockets Win 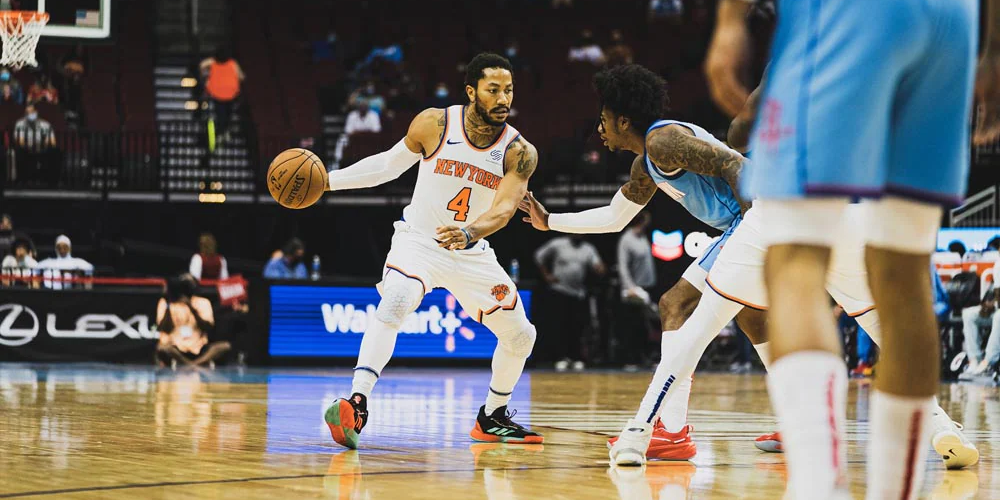 The Knicks start their six-game road trip with a blowout victory over the Rockets, thanks to Julius Randle’s third-quarter play and Derrick Rose’s pace and outside shooting.

Starting the month with a six-game road trip over the next 10 days, the Knicks did not disappoint. It started with Houston and New York trading basket—R.J. Barrett getting some aggressive attacks to the basket while Porter Jr. matched him with his inside-outside game. But the Knicks began to turn up on both sides of the ball. Defensively, the Knicks made sure to stifle and throw a second man at Wood and Porter, making them attempt to move the ball rather than create their own offense.

On offense, the Knicks began raining threes. Barrett knocked down a couple of threes while Randle backed him up with two of his own. In the first half, five Knicks knocked down threes and that outside presence allowed New York to get more easy looks around the rim. Randle began to attack the basket while a Nerlens Noel finish pushed the Knicks to double digits. What started as a back-and-forth game turned to a 15-point lead at the half.

That lead didn’t disapparate as Randle reminded everyone that he is, in fact, an All-Star, taking care of most of New York’s offense in the third, puzzling Houston’s defense with an array of jumpers and drives. In total, Randle finished with 12 points in the third. When he wasn’t scoring the ball, he found Reggie Bullock (11 points, 3-of-6 from three) on the perimeter. Randle’s play and ability to create baskets for himself was key in pushing New York’s lead to 22 by the end of the third.

The fourth quarter was simple for New York—let Randle and Barrett rest as they prepare for a game tomorrow. Immanuel Quickley and Obi Toppin (five points, three rebounds) got some minutes while Rose led the charge. Tom Thibodeau decided to empty the bench. Norvel Pelle, Frank Ntilikina, Jared Harper, Kevin Knox, and Theo Pinson all got some run tonight, and the Knicks remained in fourth place in the Eastern Conference. All was well as the Knicks avoided falling against a feisty Houston team and got the road trip off right with a blowout win.