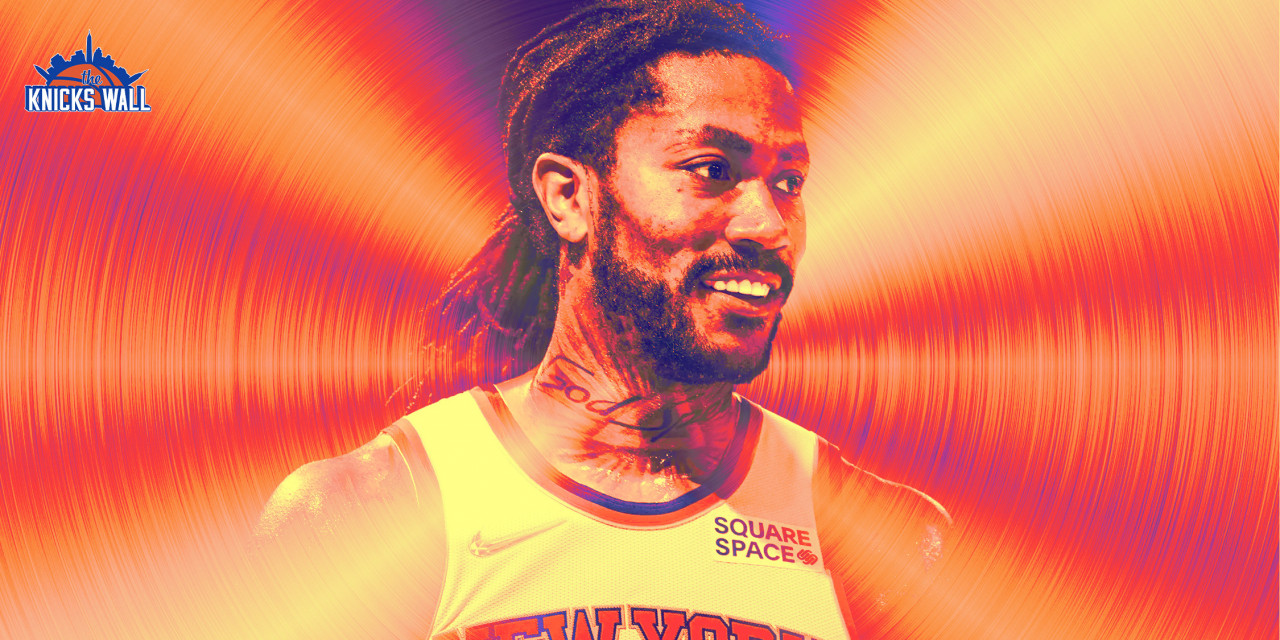 New York has missed the leadership and offensive production of Derrick Rose. Will his eventual return provide a much-needed boost?

One of the more underrated transactions in the NBA last season was the New York Knicks’ acquisition of former MVP Derrick Rose back on February 8th, 2021. Rose came over from the Detroit Pistons in a deal that sent lottery disappointment Dennis Smith Jr. and a second-round pick to the Motor City.

A Tom Thibodeau favorite, Rose thrived in his second go-around in the orange and blue and was instrumental in bolstering the bench and providing leadership and production to the Knicks’ point guard situation. Rose ended up finishing third in the NBA Sixth Man of the Year voting behind Utah Jazz teammates Jordan Clarkson and Joe Ingles.

As we all know, D-Rose’s Hall of Fame career trajectory was derailed badly by numerous serious injuries, causing him to miss extended periods of time and lose a lot of his ability to make dynamic plays. Rose was also stuck on bad and irrelevant teams like the 2016–17 Knicks, the Timberwolves, and Pistons for a decent chunk of his career, he became somewhat of an afterthought in the basketball world.

The 33-year-old has reinvented himself to a degree, becoming more of a savvy veteran guard who can hit mid-range jumpers as opposed to a high-flying rim attacker like he was back in Chicago. Rose’s resurgence last season saw him become a very integral part of the Knicks, where he averaged 14.9 points in 35 regular-season games on 41.1% from behind the arc, per Basketball-Reference. In the brief playoff series, Rose was the Knicks’ best player, putting up 19.4 points, 5.0 assists, and 4.0 rebounds in five games. Rose earned himself a three-year, $43 million extension in the offseason and proved he can still be a vital piece on a playoff-caliber squad.

Back on December 16th against the Rockets, Rose suffered an ankle injury, which added to a laundry list of lower-body ailments the point guard has suffered in his career. Rose underwent surgery on December 22nd, sidelining him in the neighborhood for around two months. Rose had more of an increased role this season, with the demotion of Kemba Walker and the fact that second-year guard Immanuel Quickley is still better served as a backup this early in his development. With Rose on the shelf, the Knicks have treaded water and gone 9-8 in 17 games, but recent terrible losses to the Hornets, Timberwolves, and Pelicans all at home have the panic meter creeping up.

In the Knicks’ 10 games in January, they have been averaging only 101.6 points per game, well below their already 27th ranked average of 104.0 per game, via NBA Stats. January has seen some rough scoring outputs for the ‘Bockers with 75 points against the Celtics, 87 against the Hornets, and 91 against the Pelicans—all teams the Knicks are on par with or should beat.

One main issue with last season’s Knicks team was their lack of offensive firepower and with Derrick Rose out and collective regressions from many of their players, it has become a major problem again.

Point guard has been a particular issue for the Knicks during this tough stretch offensively and the only help on the horizon seems to be the return of Derrick Rose. Quickley, unfortunately, has regressed this season in terms of scoring and shooting percentages, per ESPN Stats, and in the last three games (all losses) Quickley is only contributing 10.7 points per game with eight total turnovers. Kemba Walker, who has missed most of the stretch where D-Rose has been absent with a knee injury, went on an offensive tear in mid-December, but he is working his way back from injury and has struggled to put up numbers offensively over the past few weeks. Walker at this point in his career can still get buckets but doesn’t provide the consistency and reliability of a Derrick Rose. The Knicks’ offensive woes are surely not solely on the backs of IQ and Kemba, but definitely the point guard position has not been an offensive plus since Rose went down.

Oftentimes in the NBA, we hear that a player returning from injury serves the same purpose as a trade deadline acquisition in that the player being re-added to the roster is like bringing a new player into the mix. For example, Klay Thompson being re-inserted into the Warriors lineup is essentially adding a piece without spending additional money or trading anyone. This is a similar situation with Rose, who is being re-evaluated in February and hopefully returns in that month as well.

Right now, the Knicks find themselves on the outside looking in of the play-in tournament, very disappointing considering the expectations the team had for this year. I do believe the Knicks have the ability and talent to tread water until Rose comes back, but if they continue to lose games to teams like the Pelicans, it will be too little too late. Nobody would have thought at this time last year that 33-year-old past his prime Derrick Rose would be a huge factor in the Knicks playoff positioning but here we are. Last year Rose was the boost Knicks fans didn’t know they needed, this year we know he is an important piece.

»READ: The importance of Derrick Roes and point guard play